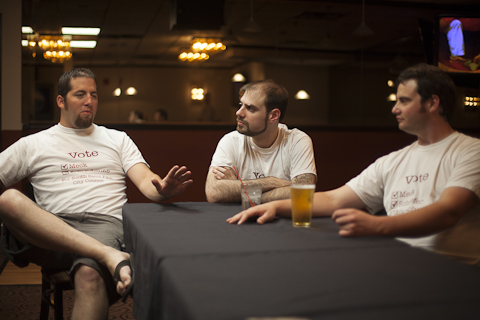 Three young men, inspired to run by their Tea Party activism, are challenging three incumbents on the six-member South St. Paul City Council. Mike Marschinke, 28, Shawn Meck, 28, and Nick Schaefer, 29, want to disprove the belief that politics and 20-somethings don’t mix. The three incumbents are Lori Hansen, 57, Christopher Lehmann, 45, and Dan Niederkorn, 57. Hansen is running for her fifth term, Lehmann is running for his third term and Niederkorn is running for his third term. The other three members of the city council will be up for election in 2014.

South St. Paul city candidates run without official party designation, but Marschinke, Meck and Schaefer decided to add a twist to their campaign: they are running as one unit.

“We share the same views and to be able to make a difference in South St. Paul we realized that it’s going to take more than one person to do it, so all three of us are running as one,” said Meck, who came up with the trio’s slogan We Run As One.

Meck and Marschinke, 2002 graduates of South St. Paul high school, have lived in the city most of their lives. Schaefer has resided in South St. Paul since 2005; his father opened a plant store in the city the month Nick was born and says he has known the city his entire life.

Marschinke assembles firearms at JP Enterprises, Meck is a Shipping and Receiving Supervisor at Changer Services and Schaefer is a Service Technician at Binder Heating and Air Conditioning.

“We’ve worked for the past ten years as blue collar, so we know exactly what people are going through. We weren’t born with silver spoons in our mouths. I, for sure, was born pretty dirt poor so I know exactly what goes on between busting your hump to actually make a living and just sitting on welfare and collecting a paycheck,” said Marschinke

Niederkorn’s path to city council began as a South St. Paul neighborhood advocate, successfully preserving and protecting environmentally sensitive bluffs. He was a member of the city’s planning commission prior to his term as council member. This year, he was appointed to the city’s Housing and Redevelopment Authority. Along with Lehmann, he serves on the board of the South Metro Fire Department, the full-time paid fire department of South St. Paul and West St. Paul. Niederkorn is the current board president of the fire department.

Five of the candidates appeared on a September 4 candidate forum produced by Town Square Television where they debated a range of topics. Council member Hansen appeared on the forum.

Marschinke, Meck and Schaefer have a campaign website.  Incumbents Hansen, Lehmann and Niederkorn do not. Niederkorn said he much prefers the personal touch of going door-to-door and talking directly with citizens, and hopes to visit 1,000 homes by election day.