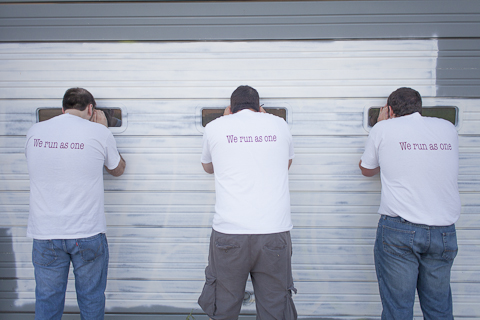 The three challengers are running as one unit. Here they inspect one of several abandoned buildings along South Concord Street. (Photo by Jeff Rutherford)

South St. Paul is “an area that’s trying to find its way. It’s been pretty much the same for the past 20 years, since the stockyards were removed,” said South St. Paul City Planner Peter Hellegers.

A trio of young candidates challenging South St. Paul city council incumbents maintains that the city has a poor business climate, and that the current city council is responsible for it.

Mike Marschinke, 28, Shawn Meck, 28, and Nick Schaefer, 29, point to the commercial success of Robert Street in West St. Paul as a peer-city business model. “[West St. Paul] has more businesses then they know what to do with,” said Marschinke.

“Robert Street is loaded wall to wall, for miles, with businesses. They’ve got Signal Hills [shopping center] and Southview Square. Now they have a Lowes, a brand new Menards, two Walgreens, a Target and a Walmart,” said Schaefer.

Schaefer said the list of existing businesses is South St. Paul is a short one, offering a limited business community such as the Clarion Hotel, Al’s Corral, the VFW [Post 295] and a bowling alley. There are no clubs, shopping centers or other attractions to entice a younger crowd to visit the city, he said.

“That BridgePoint Business Park has 100,000 square feet of empty office space. Three businesses are occupying it,” said Marschinke. “How long is this going to take for it to pay for itself?”

The Bridgepoint Business Park opened in the summer of 2012.

Council member Christopher Lehmann (left) said the development is partially leased, with B.W. Systems occupying 31,000 square feet, and 95,000 square feet remaining available. “In speaking with Greg Miller, the president of Interstate Partners, at the grand opening of the building,” Lehmann said, “he had little concerns about renting the remaining space. He told me he had a number of people interested and was very appreciative of the City’s patience and willingness to work with them until they could obtain financing for the project.”

Wells Fargo Bank leaving the city in 2011 was a huge hit, said Marschinke. Its doors closed the day before Christmas Eve. Cerenity Care Center left South St. Paul the day before Thanksgiving, and its site, the former Divine Redeemer Memorial Hospital, was razed in the spring of 2012.

Council member Dan Niederkorn said South St. Paul pays a yearly fee of $25,000 to the property rental firm Progress Plus, the economic development initiative of the River Heights Chamber of Commerce (the city of Inver Grove Heights pays Progress Plus an additional $25,000). This public/private partnership is designed to accommodate planned development in those two cities. He feels it is a good partnership.

Marschinke, Meck and Schaefer, however, believe property firms should be offered a commission to find businesses to come into the city, rather than a flat rate. A commission incentive would motivate Progress Plus to bring businesses into South St. Paul more than the flat rate, said Marschinke. “Why would we pay you a flat rate for zero businesses brought in. Why would you do that. Shouldn’t it be performance-based?” he said.

The trio’s “Business Incentives Plan” includes offering new businesses a 40 percent decrease in property taxes for up to four years, based on business size. “That number could go up or down depending upon what the property tax level is,” said Meck. “With existing businesses, if they improve their property a certain amount, we would give up to 15 to 25 percent decrease in their property taxes, but that would be a year-to-year thing. If they did improvements that first year, depending on what they did, it would be 15 to 25 percent for that first year.”