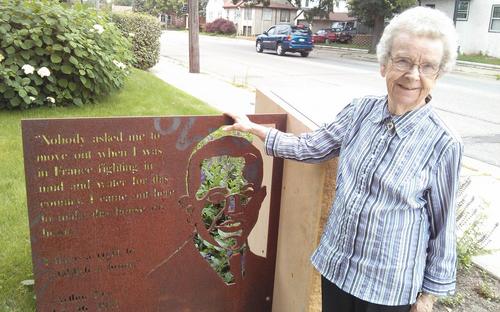 Pearl Lindstrom, the owner of the south Minneapolis home recently added to the National Register of Historic Places has died at the age of 92. A call to the Hennepin County Medical Examiner today confirmed Lindstrom’s death was reported with their office. The cause of death, time of death and other details are pending an official investigation.

Lindstrom lived in the little house on the corner of 4600 Columbus Avenue South in Minneapolis for over 50 years. She was thrust into the spotlight last summer because of renewed interest in the story of the Lee Family, the home’s previous owners.

In 1931, Arthur, wife Ethel, and daughter Mary Lee were met with racial animosity and strife as an African-American family integrating an all-white neighborhood. As we previously reported, renewed interest in the Lees’ story begain to gain traction, according to the Star Tribune, after a 2001 publication of research by law Professor Ann Juergens.

Arthur Lee, a World War I veteran and a postal worker, found solace and protection for his family from other veterans and co-workers, many of whom were white. After two years of turmoil, the Lees moved from the home, but today their story serves as a poignant reminder of a turbulent period in Minnesota race relations. In 2011, an Arthur Lee monument was unveiled in Lindstrom’s front yard with a big community celebration and commemorative ceremony; Lindstrom served as a gracious host.

The house gained national attention when it was added to the National Register of Historic Places on July 11, 2014. We spoke with Lindstrom in July about the historic recognition and what the honor meant to her. “It just reminds me that there are many, many people that are nice, both black and white” said Lindstrom. “Love people the way you’re supposed to, the way the Bible tells us…we’re supposed to love others as we love ourselves. So that’s what I try to do!”

Watch a video of Lindstrom talking about her historic house below: