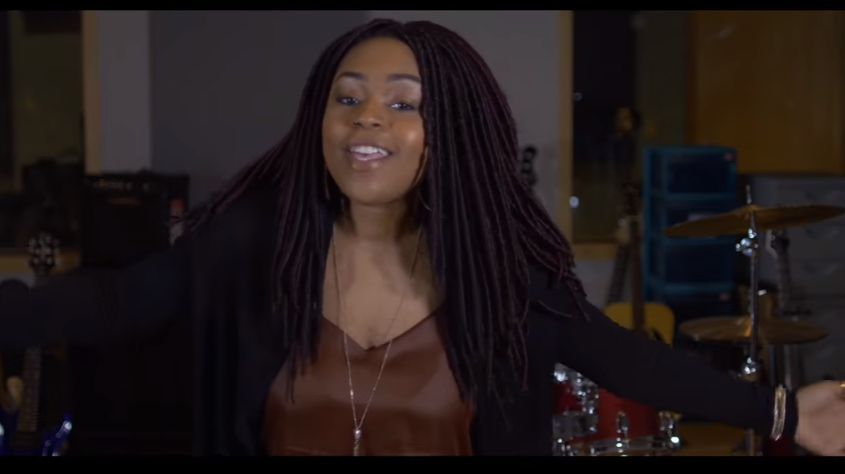 “So often the terms and phrases applied to African American youth are negative: at risk, inner city, thug, gangster,” said Gary Hines, a three-time Grammy award winner and music director of the ensemble Sounds of Blackness.

Hines, along with Sounds of Blackness, recently partnered with students at St. Paul’s High School for the Recording Arts (HSRA), to create a paired song and video inspired by that very message. The project, titled “Royalty,” was written, produced and performed through this collaboration, and aims to build professional savvy, musical skill and a sense of pride. “Image affects behavior,” said Hines.

“I wasn’t really a school person,” said Kenan Lipsey, a student and aspiring musician at HSRA. The school, founded in 1996, takes a unique approach that blends independent study of musical performance and production with standard high school curricula. Compared to other local high schools, HSRA has noticed higher engagement; students like Lipsey say that’s because of the school’s focus on subjects that interest them, like producing “Royalty.”

The project has always been a labor of love and supported by a wide arts community. KMOJ and the Minnesota Arts and Cultural Heritage Fund galvanized early to help connect HSRA students to Sounds of Blackness. Rock the Cause, a Twin Cities nonprofit, helped generate buzz and raise money. Everyone felt energized by this opportunity.

“Even at that first meeting ‘Royalty’ was already bubbling,” Hines recalled, and the timing couldn’t have been more appropriate.

HSRA founder, David “T.C.” Ellis, collaborated with Prince on his New Power Generation. Inspired by the work Prince did for youth and music, Ellis recognizes the value in music literacy, feeding business relationships, and artist collaborations.

“He was a friend of mine and was a lot of the inspiration for me to do what I’m doing now,” Ellis said.

Hines went to school with Prince and also shared what he picked up from him.

“Prince had always really exhorted me and Sounds of Blackness to do what we did, which is to focus on the young people and to make them aware of our history and heritage,” he said. “It’s something he was really passionate about.”

Hines and Ellis discussed collaborating for years, seeing a natural fit with their mission-driven work. Help from KMOJ to secure grant money finally nudged them towards that dream. “Gary toured the school, saw the facility and immediately started talking and connecting with the kids,” said Ellis. Some of the students volunteered and it really took on a life of its own.” Hines provided the skeleton and worked with Sounds of Blackness and the four student artists to “put the meat on it,” he said.

At HSRA, students are involved in the music-making process from start to finish: not only in singing or rapping, but with production and technical skills. A key lesson at HSRA is that not everyone will become famous but that there are real life jobs in the music industry, including entrepreneurship.

In 2010, Rock the Cause pivoted toward supporting careers in music when, “we were invited by Junior Achievement to conduct a one-day workshop on careers in the nonprofit world with a music angle,” said CEO Scott Herold.

Ever since, Herold has stayed involved with HSRA by teaching life and employment skills that focus on the music industry. With “Royalty,” Rock the Cause and HSRA worked on developing press kits and promotional material–the unseen work that drives album sales or pushes a single to the airwaves. In the classroom, Herold recently worked with students to contact 1,200 radio stations about the song during an afternoon session.

When Gary came up I didn’t know who he was at all,” said Jabreh ”JayBree” Shaw, a student performer on “Royalty.” Somehow, Hines struck a chord with JayBree and he signed up. “To me it was a great opportunity,” he said. His former classmate Alia Lene, a recent HSRA grad, is currently working on a project in Atlanta. Shaw is hoping the exposure from “Royalty” will open doors for him as well.

“When I talk to radio programmers,” Hines said, “they say, ‘I can’t distinguish the professionals from the students.’” Hines sees the resulting change this experience has had on his students,

“One young lady, not one of the singers, saw the video and said, ‘Until I heard this song, I didn’t know I could be royalty. I thought you had to have blond hair and blue eyes. Nobody has ever called me that before.” Lipsey, had a similar take. “It says even though you’re down and out you’ve got to keep forward and stay strong,” he said. “It changed me.” Now he’s organizing a fundraiser for the school, inspired both by the song’s message, but also by seeing its trajectory.

“I think it affects their ability to look into what they can do and take the forward step the next time something pops up,” Ellis said. And there’ve been accounts of a Royalty Effect: “It’s basically the same thing that happened with me: I grew up with Prince, I watched him to do it, and that empowered me to say, ‘He did it, I can do it.’” Beyond the single achieving instant success, the students understand firsthand the legwork it takes being successful: they made the single, filmed the video, and learned the distribution and press sides of the industry. “I’ve never had this type of experience and for it to happen, it’s like something bigger can happen too,” JayBree said.

“This is going to be ongoing,” said Hines, viewing the “Royalty” single as the start of something bigger. They have hopes to build it into the curriculum,  eventually leading to a full album’s worth of material  and new collaborations with many other musicians.

“We’re using ‘Royalty’ for the positive image of the young person so they can have a different perspective,” Ellis said, “we’re saying you are special, you do deserve that and, given the resources you need, you can be successful.”