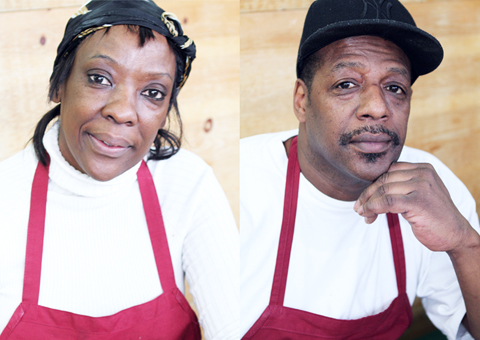 Michelle B and Eddie Addams. Photos by B FRESH Photography.

Soul Food Heaven is a classic soul food establishment, nestled next to a small supermarket in St. Paul’s North End. Having only been open since October of 2012 hasn’t stopped the restaurant from becoming known as the place to get soul food in the Twin Cities.

The small restaurant, which you may miss under it’s unassuming signage if you aren’t careful, has become a destination for the Twin Cities eater who needs a fix of soul food classics like Memphis-style chuck roast and fried catfish with all the sides, or the occasional “gangster burger” (three half-pound burger patties covered in gyro meat, Italian beef, steak, and cheese!). Chefs Michelle B and Eddie Addams will be adding lighter menu choices in the summer, with more salad options.

I started my tasting with the Tuesday Taco special. A soul food taco? Yes, and filled to the brim with ground beef, nacho cheese, sour cream, lettuce, and salsa. It reminded me of Indian Tacos made with frybread—a comfort food from my summers on the Powwow circuit. The duality of crunch and softness is especially clear when you order the version with the soft pita bread shell fried to a golden crisp. 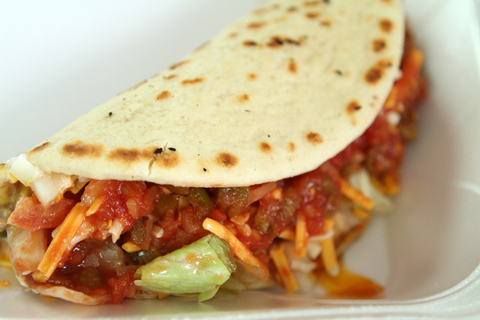 For the second leg of my tasting, I went after a more traditional southern soul food meal of smothered chicken with a side of dirty rice and greens. The gravy smothering the chicken was rich and spicy, though its thickness made it a little tough to eat the wing pieces. But hey, that’s what napkins are for. The dirty rice felt a little over-seasoned, but was a good side for mixing into the chicken’s gravy. The greens had a salty, porky mouthfeel that I love in greens. They had plenty of extra juice to soak up with the cornbread muffin included with the dinner meal. 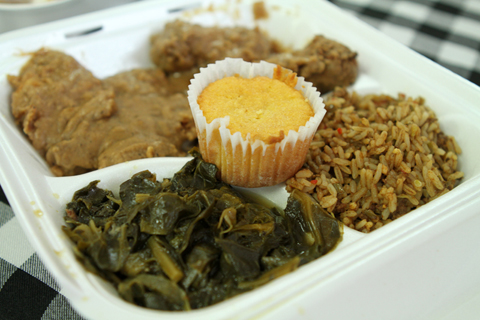 I rounded out my meal with a small order of perfectly tender and well-seasoned catfish nuggets along with a sample of the always sold-out Saturday special of chitlins. This is one of the only places in the cities to get the southern delicacy and there will be a line, so get there early. 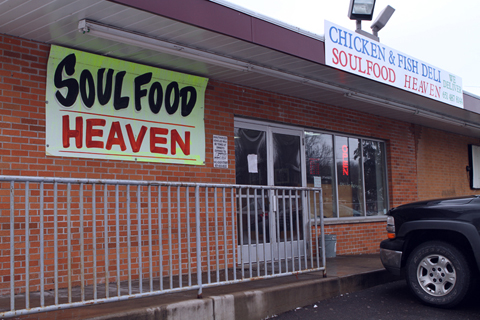 Chef Michelle B spoke with me about her relative newness to the restaurant business and how, in the past, her midwest roots led some to believe she wouldn’t be able to cook southern food. Despite this, she has become the embodiment of her own personal definition of Soul Food as not just southern food, but food made with feeling and with one’s soul. She has embraced a kitchen ethic of making food that tastes like home and knowing that her clientele aren’t looking for something new, but rather, something familiar and comforting.