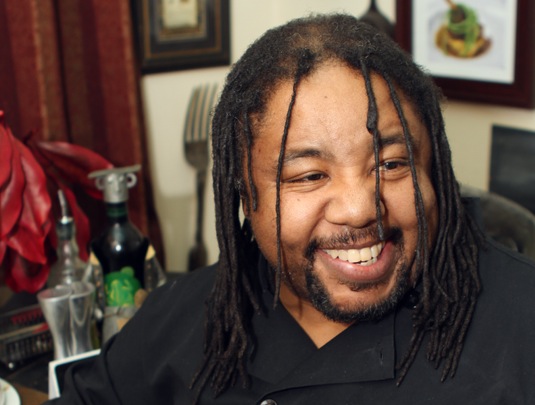 Photos by B FRESH Photography and Media

There are rare chefs who elevate every dish they craft, and display clarity of vision without the hangups of timing and measurement that plague the lesser cook. These rare artists of the kitchen can spin you a familiar story you’ve never heard before, from the same ingredients that others, by comparison, seem to be using for plain, utilitarian purposes.

One of these extraordinary chefs is Eric “Big E” Austin. The dishes I was lucky enough to sample were seemingly the best parts of every variation of dishes I had eaten before. (These days, Big E is only catering for large company celebrations, teaching cooking classes, and making weeks’ worth of food at a time for NBA and NFL players.) There were no surprises on the menu—no French names or sous vide bags simmering for days. The foods were instantly recognizable, and yet, to the trained eye, different in a very special way.

Somehow a carefully presented mound of jerk chicken wings that would fit perfectly in a restaurant seemed out of place to me as I sat on a couch in Chef Austin’s home. The wings  were glistening with a sticky sauce that covered, yet didn’t penetrate, the golden crust Big E had so meticulously fried on their surface. I felt that between my seat and Eric’s kitchen in the other room lay a portal to a grand, shining, stainless steel restaurant workspace. When Chef Eric invited me into his small culinary lab, I understood that the strange science I had encountered was the handiwork of the chef’s own skill. 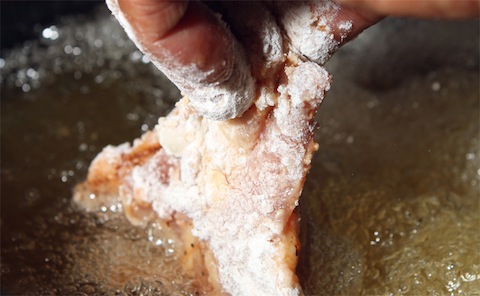 Big E met me in the old hotel lobby of his Minneapolis apartment building. My perceptions began to shift at the door. The fountain bubbled and echoed against the expanse of the atrium, a building which once housed Minneapolis elite and its fair share of Prohibition-era gangsters. The tiny, ancient elevator lifted us to his floor and opened to the smell of greens, red beans and rice, chicken frying and baking, and tender neck bones stewing. Big E leaves his door open while cooking, a practice that lures neighbors from other floors to the door at the end of the hall. Inside were large black and white paintings of jazz legends that he and his partner Melanie painted together. The white tiled kitchen was packed full of kitchen gadgets and appliances. In a handful of dishes, the chef began to regale me with the story of soul food.

The red beans and rice Big E served were better than any I had ever had. Every bite tasted like the one that gets scraped from the bottom of the pan, the one that contains the most condensed and concentrated flavor of the dish. Creamy from the starch of the beans, but not heavy and paste-like as many rice and beans recipes turn, each bite contained a perfect ratio of beans and andouille to rice. Next were collard greens that produced a steam, heavy with the scent of cruciferous vegetables and smoked turkey. They were tender and almost delicate in the way they melted in the mouth. I was mopping up the juices on my plate with a sweet potato corn muffin that was just sweet enough to break up the strong salty and meaty flavors I was encountering, while imparting its own distinct, dessert-like quality. 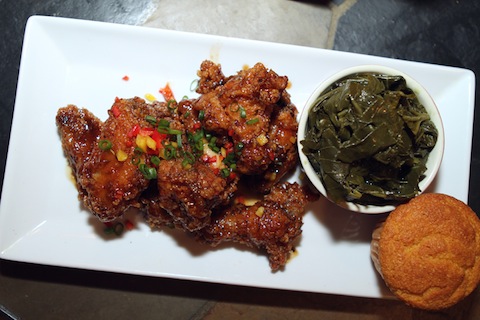 With the next set of dishes, Chef Eric showed off his inventiveness and appreciation of the African and Caribbean roots of American soul food. Slow-braised curry neckbones were plated in their rich, spoon-coating broth that tasted like true island fare in all of its porky goodness. From the African roots came baked chicken with spices Chef Eric has picked up from studying Somali food. The herbacious and citrus flavor these new spices bring to a dish hold up to soul food tradition and taste right at home next to greens and black-eyed peas. And from Brazil, Big E showed me a black-eyed pea fritter made not with whole peas in a traditional corn batter, but rather a batter made from pureed peas, onion and baking soda. Dropped into hot oil, these fritters puff up into a light pea-based, bread. The distinct flavor of the black eyed peas makes them a delight to eat, as the essence of a spoonful of peas fills your mouth when you bite through the golden brown exterior.

It seemed that Big E was at play in the kitchen, his demeanor laid-back, yet effervescent. I was getting to meet a person in his element. We talked about food history, the Twin Cities food scene, umami (the fifth flavor), and what it was like to own and run his own restaurant, Big E’s Soul Food, which Chef Austin opened in 2002. Though the restaurant has been closed since 2006, Big E has been very busy with catering and a number of side projects. 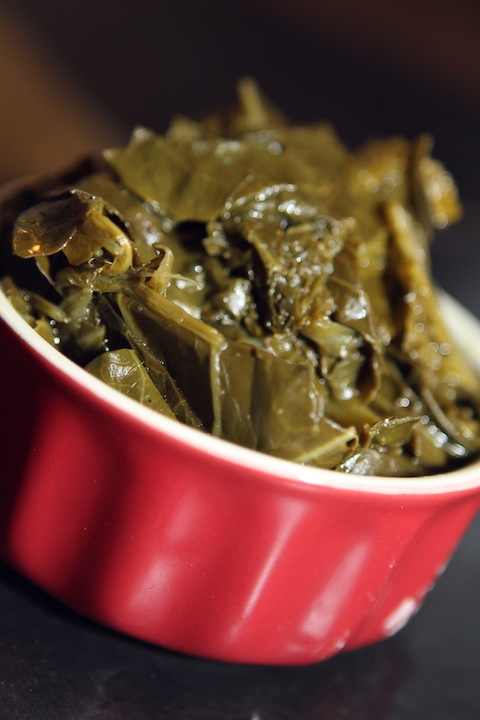 Big E has been privately cooking for professional athletes across the Twin Cities for years, often being hired by the young players’ mothers or girlfriends, and he also spends time cooking for the Timberwolves in the Target Center. This gig involves quite a bit of nutritional balance, as every player needs a certain mix of protein, vegetables, and starches as laid out by the team dietician. All of Chef Eric’s knowledge and experience could fill a book, and indeed he is currently working on a cookbook, among his many other projects. All of what he is doing now, though, is superseded by his desire to reopen Big E’s.

My time with Chef Eric has opened my mind about the direction soul food and traditional foods are heading, in a culinary world that is getting smaller. Fusion has been the cuisine du jour for the past decade or so, and is certainly where many new chefs are heading. There is, though, a movement gaining ground based on the elevation of simple foods and old culinary traditions. Big E didn’t like to use the term “elevation,” but I find it apt. Big E’s elevation of soul food does maintain the cultural roots he bases his food on, all the while giving the diner an experience that transcends the usual. The dishes sit on the line where the past meets the future. 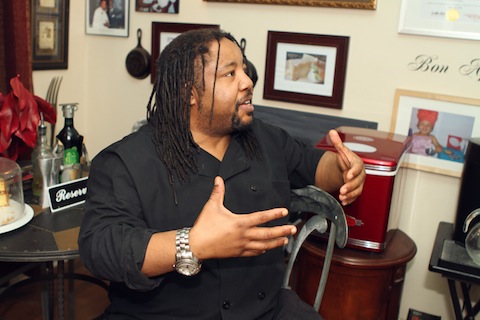 It is through the imagination of a brilliant chef who sees his Mississippi roots all around him rather than leaving them behind that soul food moves forward. It is in an all-encompassing desire to enrich people’s souls with the warmth and emotion of a homecooked meal that the story of soul food is told. 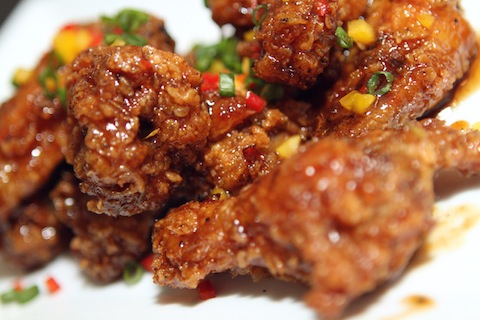 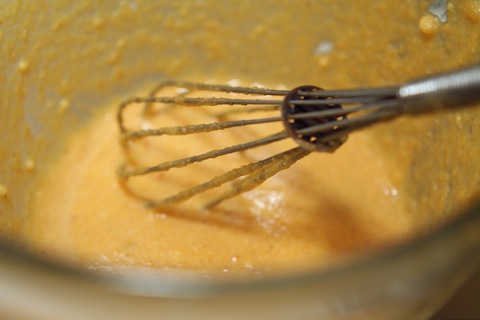 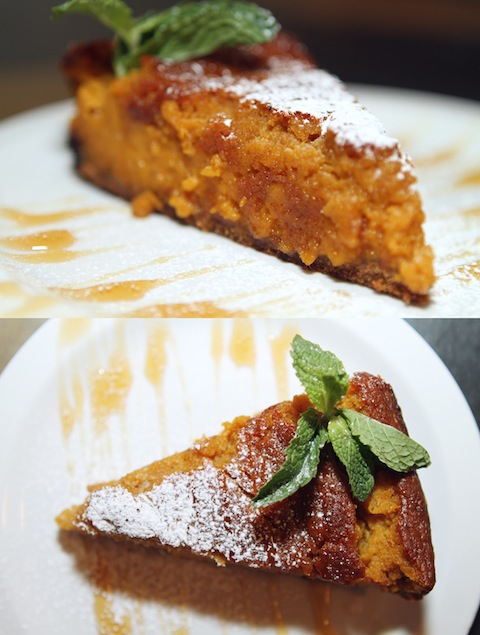 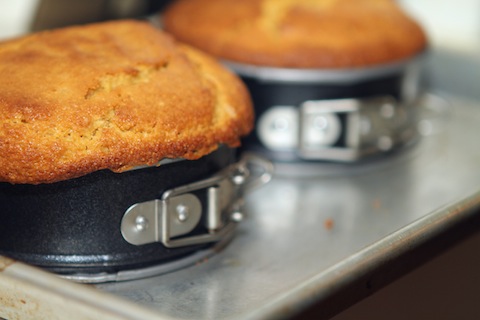