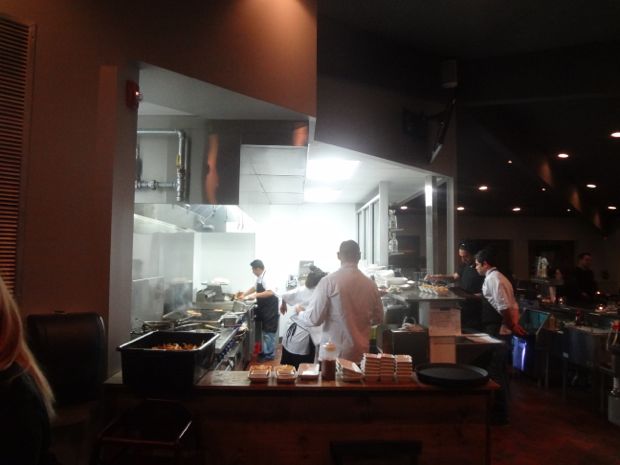 I was pleasantly surprised by my most recent visits to the new Sonora Grill at 33rd and E. Lake Street. I’ve been a fan of the original Sonora Grill counter inside the Midtown Global Market, but the new sit-down, table service restaurant (in the former Molly Quinn space, strikingly remodeled) offers a full bar, more variety, and a creative take on Mexican cuisine. The basic staples of Mexican street food are on offer — caramelos (tacos, $4) and bocadillas (sandwiches, $10, lunch only) and guacamole ($5), but there are also more creative offerings, ranging from a hermosillo roll ($10) – which was described to me as a a Mexican take on the sushi specialty roll, stuffed with shredded pork and rice, breaded with panko crumbs and deep-fried. I’m also eager to try the fried pork tail ($6), which, according to a manager, is prepared like Buffalo chicken wings.

Some of the more adventuresome offerings may be too adventuresome for the mostly non-Mexican clientele: I expected the Mexican tripe and garbanzo stew to be a version of menudo, the classic hangover cure, but it turned out to be something different, and a lot more interesting — a stew in the style of the French tripe a la mode de Caen, with lots of chewy strips of tripe in a very savory, not-too-spicy tomato and chile sauce.  I tried it on my first visit and loved it, but by the time I returned a couple of weeks later, it had disappeared — it just wasn’t selling, the manager told me. (I wonder how long the deep-fried pork tail will last, or the side dish of braised kale with pig ear and Cotija cheese for $5). My other favorite of the dishes I sampled on the dinner menu was the mariscada, a cousin of cioppino and bouillabaise, brimming with scallops, prawns, clams, mussels and fish ($18).

The shishito peppers with huitlacoche crema ($8) were a nice balance of spicy hot peppers and mild creamy sauce — and I suppose that as long as the less adventuresome diners don’t know that huitlacoche, considered a delicacy  south of the border, is actually the Mexican name for corn smut, they probably will enjoy the dish.  (According to Wikipedia, “… the USDA has spent a considerable amount of time and money trying to eradicate corn smut in the United States.”)

I was also pleased with the chilaquiles — strips of tortilla fried in salsa verde, and topped with a fried egg, available with your choice of pork or chicken ($10). But my favorites were the tacos — at $4, they’re about twice as expensive as the kind you buy from a truck, but they are also bigger, tastier and more colorful. The fish taco was made with firm fresh mahi-mahi deep-fried in a green tempura batter, and served atop a chimichurri aioli with fresh strips of red pepper; while the featured taco of the week was a tribute to the chicken McNugget — delicious deep-fried morsels of chicken breast in a crispy crust, topped with red onion and red and yellow peppers.