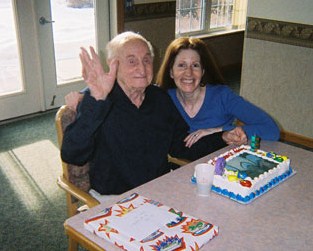 I am lighting menorah candles at Hanukkah and my father isn’t home yet. My mother is behind me and as I light each candle, we say blessings together. A plateful of potato latkeswaits on the table; I am trying to time the blessings with my father’s arrival because I want to dance on his shoes. I am seven years old.

Mom tries calling my father at his store. “Tony? This is Faye. Has Max left yet?” He has, but only fifteen minutes ago because December is a busy time in retail. So our little dance will have to wait.

We did a lot of dancing when I was small.  Once the Hanukkah candles were lit, we sang all the songs and danced like magpies while my mother finished cooking. Because he is late tonight, my mom and I sit down to eat once the lighting is done. But when my father arrives, he does not fail me. We sing “Hanukkah, oh Hanukkah” and half a dozen other songs. It seems he will never tire of dancing me around.

Years and years later, we are at Emerald Crest, an assisted-living community specializing in Alzheimer’s and dementia-related conditions. My husband and son and I see my father several times a week, taking him out for bagels and tea. But he knows he is not at home and desperately wants to be. If the doctors hadn’t told us he couldn’t live on his own any more I wouldn’t have brought him out here. At the same time, I’m glad we did.

I love having my dad around. He is fun and funny, with twinkly blue eyes and a megawatt smile. The staff is in love with him and visitors are always coming over to joke with my dad. On warm days, we sit outside by a pond watching geese hunt for crumbs. “A penny for your thoughts,” he always says.

My dad Max grew up in Bayonne, New Jersey at the height of the Depression. He recalls trolling the streets for food with his twin brother Harry. At nineteen my father was rescued by President Roosevelt, who instituted the Civilian Conservation Corps in rural areas. Max went to Idaho, and throughout his life talked about the beautiful tall pines framing his campgrounds.

Some years later, he met my mother. They married a month before he was shipped off to boot camp and then the Philippines, where he was stationed during World War II.  “Are you sure you want to marry me?” he had asked. “I could lose an arm or a leg—or not come back at all.”

“I’ll take my chances,” my mother is reported to have said. She passed away in 2000, leaving him to weep in their king-size bed on nights that may have seemed unlikely to end. The hardest thing I ever did—even harder than leaving my little boy on his first day of kindergarten—was leaving my dad alone in New Jersey when I had to return home after my mother’s funeral. It was a relief now to know I could leave work and see him within twenty minutes—a relief maybe for both of us.

It is just past four and the sky is already darkening.

Tonight will be the first of eight nights of Hanukkah; we are in a room full of older adults with various conditions—the most obvious one being loneliness. One woman has said of her relatives, “I think they’re afraid of old age. Afraid they’ll catch it.”

During the last year or so of his life, my father lost some of his ability to verbalize, but retained his sense of humor and warmth. We could hold hands on the couch for hours and understand each other perfectly. And if something was wrong and I needed to talk about it, I knew I could—and my dad would listen.

By the year 2050, Minnesota’s cases of Alzheimer’s are expected to grow to 200,000, according to a study at the Alzheimer’s Association. Those who have it may be us.

It is not a major holiday like Christmas, but has its own spark. I think it is mostly about defiance, particularly the defiance of Jews who refused to give up their traditions, even when it would have been prudent to do so. No matter what “condition” we are in, we are still part of a community that has lit candles on Hanukkah for thousands of years. And each one of us still has some Hanukkah light in our eyes.

Today the staff has asked me to share the holiday candle-lighting ceremony. On the first night, you light only one candle using a shammash to do the work. I sing the blessings, and my father recognizes them immediately. When I look at him, he flashes a broad smile.

When the blessings are over I take my father’s hand while reaching for the woman next to me. I ask people to dance around the menorah and begin to sing. Seeing this, a staffer takes someone else’s hand and in a few seconds, everyone is dancing. I steal a glance at my father. The light of the candles is reflected in his face.

Like others in this room, my father may give an impression of frailty. But in fact, he is not. He walks every day; he shares memories of World War II, his marriage and his years as a storekeeper. He is a fine storyteller, with an eye for telling details. When recalling his first night in the Army when, he jokes about finding a cockroach while draining his coffee mug. “I threw it out and finished drinking,” he says, with a wink.

We think we are the ones taking care of our elder relatives, but we never think about how much they take care of us—through stories, listening, love.

Dancing with my father, I realize some things are eternal, whether there’s life after death or not.  Driving home, I cannot help but think of the little girl whose father danced her around the menorah—knowing if I asked, my dad would again invite me to jump on his shoes.

I think of it now, three years after his death, still seeing my father’s eyes in the flames of Hanukkah. Tonight I have only a picture; it does little justice to him, but it will have to do.

Maybe somewhere, we are still dancing together. In the light.