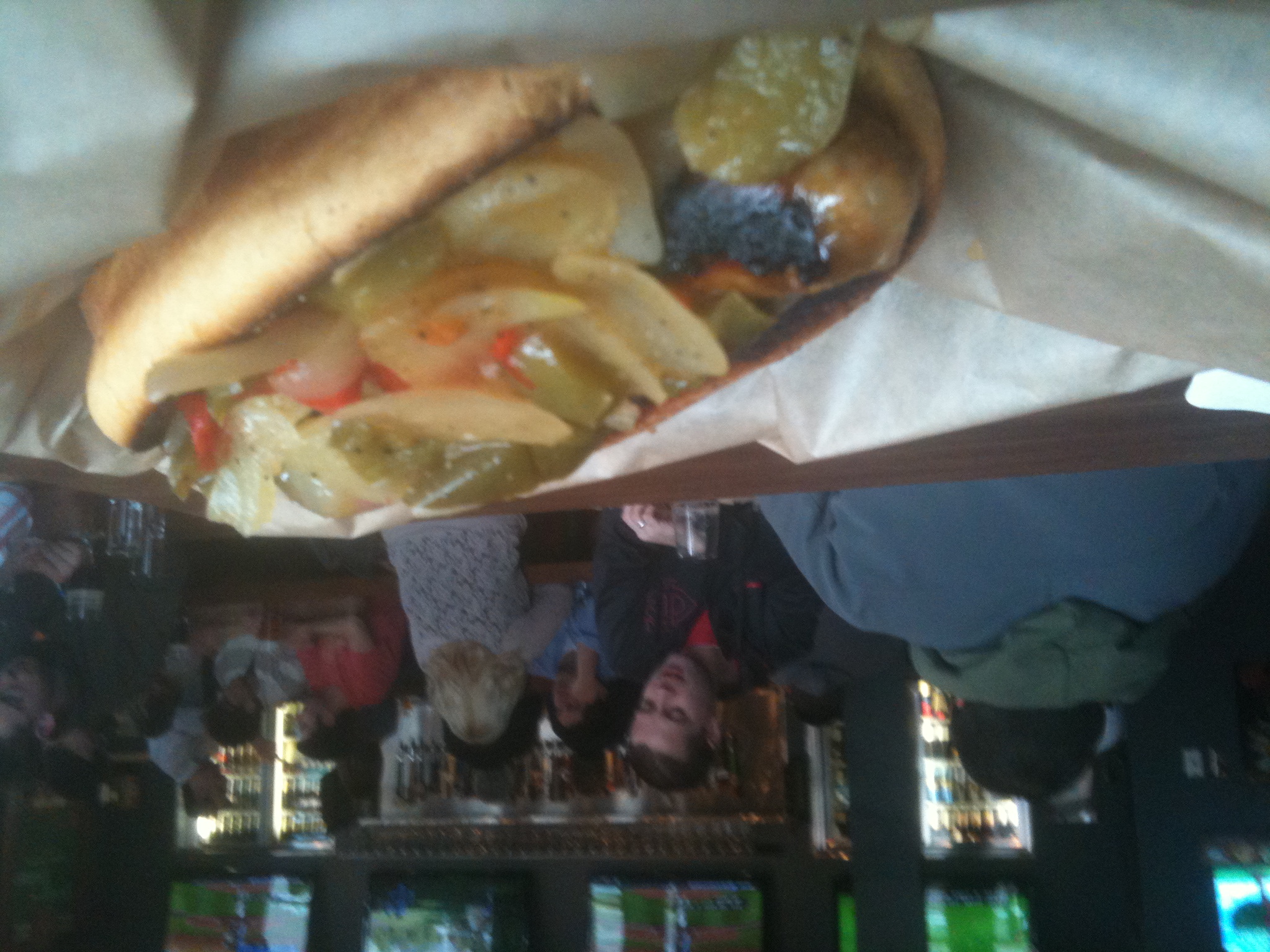 I stopped by recently for a brat and a beer at the New Bohemia Wurst & Bier Haus, 233 E. Hennepin. It’s a popular place, with more than 30 different local, regional, and foreign beers on draft and another nearly 50 different beers in bottles and cans.

The wurst selection is nearly as impressive: more than 15 different kinds of sausage, ranging from classic German-style ($6)  and savory Italian ($6) to Cajun andouille ($6.50) and even exotic varieties made from wild game  including alligator, rattlesnake,  rabbit, wild boar and pheasant (all $8). I opted for the garlicky and very tasty Filipino Maharlika pork sausage ($6.50) slathered in grilled onions and peppers, and washed it down with a glass of Summit Bohemian Pilsner ($4.75).

But it’s what they don’t serve that caught my attention.

I mean, just imagine that somebody opens up a restaurant and calls it Golden Dragon Chinese, and when you open the menu, it’s all meatloaf and mashed potatoes and spaghetti and meatballs, with maybe one Chinese item, like eggrolls, somewhere on a back page.

It would be an outrage.

So, here’s a place that calls itself the New Bohemia, after the homeland of the world’s greatest beers, and has a sign on the sidewalk, inviting people to come in and “Czech Us Out.” And there isn’t a single Czech beer on tap, or a single Czech sausage on the menu. (Okay, they do have Staropramen, a pretty good beer from Prague, available in bottles, but Czechs drink bottled beer only in emergencies. Pilsner is meant to be drunk on draft, and according to Czech tradition, it should take a full seven minutes for fill a glass, allowing the foam to settle between pours. (Even when they drink beer at home, Czechs prefer draft beer—you just send a kid down to the corner pub with a pitcher for the barman to fill.)

Does this sound personal? It is.

Me and Czech beer, we go way back. My ancestors on my mother’s side lived in Bohemia for many generations, and my mother was born there. My grandfather owned shares in the Domazlice brewery. One of my uncles owned a hops farm in Saaz, where the world’s finest hops are grown.

If the New Bohemia is going to live up to its name, it really ought to add a couple more Czech beers to its list—preferably on draft. Pilsner Urquell, from the town of Plzen, is the the beer that all other Pilsners pay tribute to, and it’s widely available on tap in the Twin Cities. Other Czech beers are harder to find, but worth seeking out—especially the original Budweiser from Ceske Budejovice (known in German as Budweis), sold in the US as Czechvar.

Finding real Czech sausage is a bit more of a challenge, but I have a solution. The most famous Czech sausage is jitrnice (sometimes called Czech haggis), made from pork heads, hearts, liver, lungs, tongues, cheeks and barley and seasoned  with marjoram, ginger, allspice and garlic. According to an old saying, people who love sausages or the law should never see either of them being made, but if you want to see jitrnice being made, here’s a link from the Czech Republic:

Lucky for New Bohemia, which sources its sausages from as far away as Maryland, jitrnice is available right here in the Midwest. Polashek’s Locker Service in Protivin, Iowa (which happens to by my wife’s hometown) sells jitrnice (they spell it jaternice), and  in their store and by mail order. For the especially proud, they also sell “Got jaternice?” t-shirts.