A proposal in the Minnesota Legislature has some Somali families outraged.

The bill would eliminate the Autism Spectrum Disorder Task Force, which has been working since 2011 to develop a plan to spread awareness and provide more services to people with autism. While state legislators and Somali community leaders both want to help families affected by autism, they disagree on how to do so.

“The task force has been dysfunctional and unable to get any work done,” said bill chief author Rep. Kim Norton, DFL-Rochester, who has a degree in special education. “We need to push to implement a plan and broaden the scope of the force.”

Previous task force members have quit and even argued during meetings, Norton said.

But task force member Idil Abdull, who is also cofounder of the Somali American Autism Foundation and a mother of an autistic child, said disagreement is natural for a task force like this.

“Find me two people who agree about autism and I’ll buy you lunch for a year,” she said.

Policymakers underserve and ignore minority communities, Abdull said. Somali communities have a higher rate of autism, according to a 2013 University of Minnesota study.

Abdull said when she first came to the U.S., there was no word for autism in Somali and many Somalis still don’t feel comfortable reporting mental health issues.

“A lot of families don’t want to talk because of the social stigma,” she said.

The University study also found that Somali children with autism were more likely to have an intellectual disability — something Norton said needs more attention. 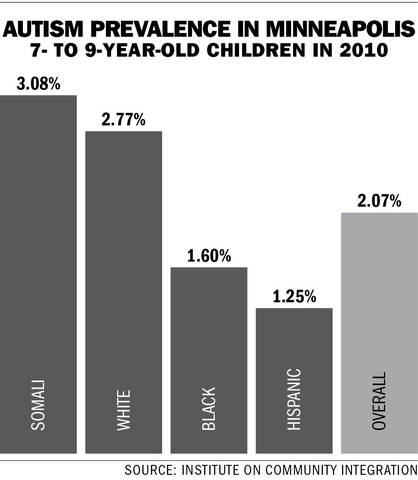 A report to the Legislature by the Minnesota Department of Health and the University School of Public Health, published in February, compared the experiences of Somali, Latino and Hmong communities. Shannon Pergament, a researcher for West Side Community Health Services who was part of the research team, said all three groups have a high need for autism-related services.

Researchers interviewed parents of autistic children and outlined recommendations for the Legislature to implement, such as creating community support groups and educating more parents about available resources.

“We want parents to give their input and tell us what they need,” said Mariam Egal, who contributed to the report and works for the Confederation of Somali Community in Minnesota.

While Adbull had never heard the word autism before her son was diagnosed with the disorder, she now “eats, drinks and breathes autism.”

Early diagnoses and better access to autism-related services are major parts of what the task force has tried to accomplish and what still needs to be done in the future, Norton said.

“There’s a lot of stress on families,” she said. “There’s therapy, housing and insurance that needs to be provided. We’re seeing such a gap between what’s provided and what they need.”

Norton worked as a family liaison for autistic children before she became a representative.

“I know the heartbreak,” she said. “That’s why we need to get this moving.”