Around 200 cab drivers, mostly Somali and male, protested January 18 in New Hope against Airport Taxi for what they say are unfair rates. The drivers demanded to speak with the owner of the company, Steve Pint. Instead, they were met with notices saying they were fired. Fliers were posted on each of the cabs that showed up to the protest, stating, “Your lease has been terminated and your auto insurance has been cancelled effective immediately.”

Yemani Mebrahtu, from the Minneapolis Taxi Cab Drivers and Owners Association, said that the most of the drivers for Airport Taxi drive for people with UCARE and Medicaid accounts. Payment for these rides is set at a flat rate, which was recently cut by the company. Mebrahtu said they didn’t know how much Airport Taxi receives from the government for these accounts.

Mebrahtu said drivers have to pay a fixed rate to Airport Taxi, regardless of whether there is a holiday, or the driver has an accident or is sick. The fixed rate for drivers who own their car is $310/week and drivers who use a company car pay $520/week.

Eid Ali said the dispute has been going on for “at least a decade”, but new cuts to the rates caused drivers to strike three weeks ago. “We want to sit down with the company and resolve these problems,” he said. 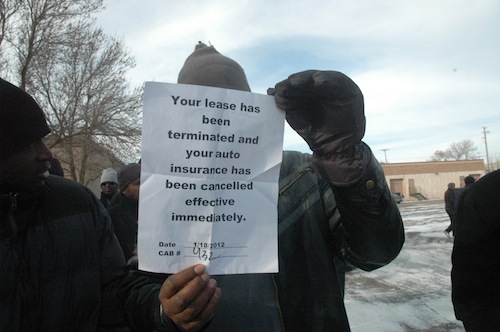 Fisseha Guanje, who’s been driving a cab for 13 years and has two kids, said the drivers don’t want to join a union. “We just want to sit down and talk to the company owner,” he said. Instead, they all got fired for showing up to protest. Guanje is particularly concerned about the $1,000 deposit he made when starting with the company. He’s not sure he’ll get it back — and in any case, there is no interest. “They kick you out – no interest!” he said.

Guanje is worried about supporting his family now that he’s fired, but ultimately, “I can’t afford to do this job,” he said. 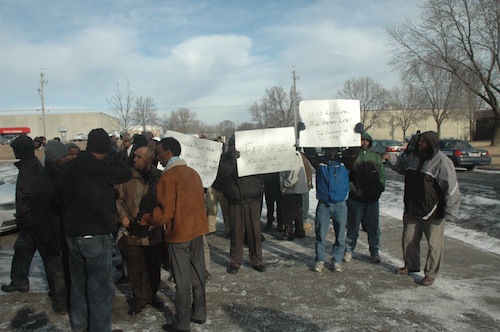 Update: Steve Pint emailed the following statement late in the day on Wednesday:

We have met with this group of drivers, which represents less than 25% of the entire fleet, twice to listen to their concerns and educate them on recent price concessions that needed to be made with one of our accounts.  We felt after the first meeting they understood and accepted the concessions and all of them went back to work.  The group requested a follow up meeting last week to address the same concerns.  We again explained to them the reason and they now do not accept them. As a result, and since they are independent contractor drivers, we have asked drivers who are not wanting to affiliate with us and accept our pricing structure to simply leave.  These drivers instead started a protest which has interfered with our business so we are now exercising our contractual rights when deemed appropriate and canceling some or all of their agreements with us.  On a case by case basis, we are already meeting with some of the drivers involved in the protest and have come to some understandings which has put these drivers back to work.