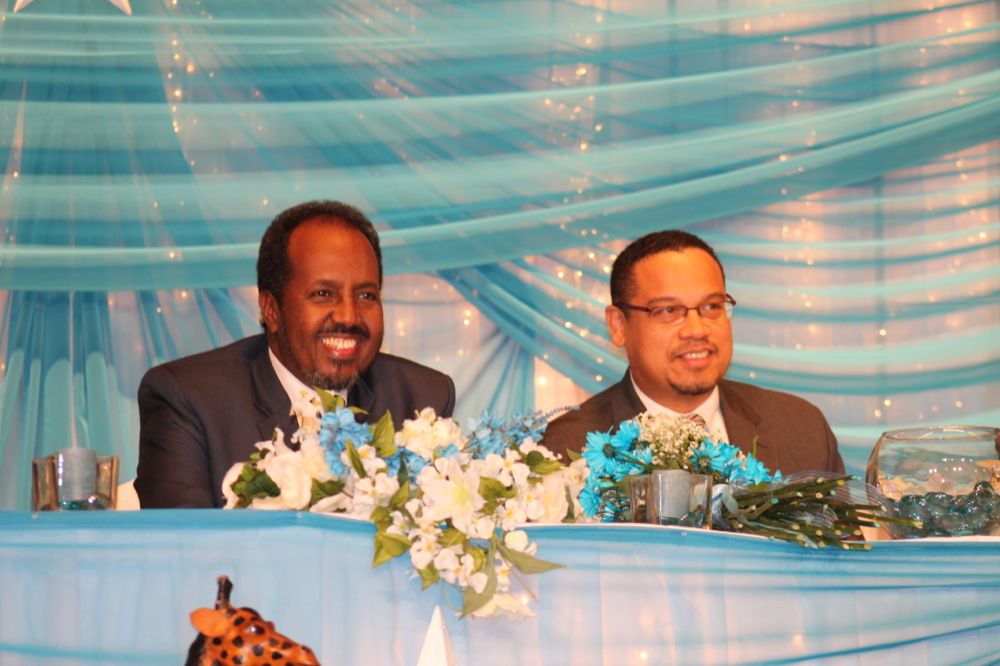 With songs of hope and peace filling the auditorium and waves of Somali’s blue-and-white flag reaching as far as the eye could see, thousands of Minnesota Somalis assembled January 18 at the Minneapolis Convention Center to meet Somali President Hassan Sheikh Mohamud.

In an hour-long speech, Mohamud spoke to a crowd of about 4,000 of his plans to rebuild Somalia and urged the Somalis at home and abroad to forgive one another, despite the two decades of clan-based war within in their home country.

“Don’t we want to see a stable and united Somalia?” Mohamud asked the cheering crowd. “There is a price to pay in order to get that good Somalia: forgiveness, patience and love. These will create a beautiful Somalia that we all envision.”

Mohamud’s visit to Minneapolis came a day after he met with President Barack Obama and Secretary of State Hillary Clinton at the White House — an act underlining the United States’ official recognition of the Somali government for the first time since 1991.

Somalia has been without a central government for more than two decades.

Even though the Somali nation and its people have lost so much over the years, there is still something to be proud of: Minnesota Somalis, Mohamud said.

“Your education and experience to make Somalia like Minnesota is a great asset to our country,” he said speaking in Somali. “Your achievements [in Minnesota] are one of the reasons we should forget about our past problems.”

Minnesota is home to an estimated 70,000 Somali-Americans, the largest Somali population in the United States.

Mohamud praised the Somali community for their positive contributions to the U.S. and to Somalia.

“The renewed diplomacy between the United States and Somali was possible because of the rights and the strong voices you have here,” Mohamud said of the Minnesota Somali community. “Somali-Americans played a big role in the renewed friendship of the two countries. And I thank you for that.”

“You should ask yourself, ‘What can I do to help Somalia,’” Ellison said to the crowd, which broke into a standing ovation when he was introduced. He also assured Minnesota Somalis that their country has many friends in the United States and Minnesota, who will stand by their side during the rebuilding of their country.

Mohamud appealed to Somalis to return home and become part of the country’s reconstruction.

In the 1970s, said Mohamud, Somalis used to go to some of the Middle Eastern countries for jobs so they could send money home for their families. After the civil war broke out in the country in 1991, he added, Somalis started moving to the west and the United States to help their families in Somalia financially.

He reminded the Minnesota crowd that Somalia is moving away from its crises and chaos, into a new era: nation building.

“Right now, Somalia needs more than just the $100 you send,” Mohamud said. “Somalia needs your technical know-how. It needs your experience. It needs the education your children were able to achieve, unlike those left behind in Somalia.

Many of you are waiting for a secure and stable Somalia so you can go back. And Somalis wait for you to return and to stabilize. So, which one comes first?

While Mohamud spoke to thousands of supporters inside the center, more than 70 people stood outside, holding signs with messages against Mohamud and shouting “down with the president.”

The protesters criticized the president of “dictatorship,” saying that he stumbled on the constitution by not supporting federalism in Somalia. They said the president has been supportive to his Hawiye clan since he took office, while he isolates other clans.

“The president is taking us back to the early 1990s experience,” one of the protesters, Abdulahi Gedi, said of the historic war between the two major clans in Somalia, Daarood and Hawiye. “He’s completely against any progress made by other clans, other than his own.”

“I’m glad that these people are holding up signs, and not guns,” the president said of the protesters. He welcomed talks with the demonstrators, saying, “We will apologize if we’re on the wrong side.”

Mohamud was accompanied by Minister of Foreign Affairs and Deputy Prime Minister Fawzia Adan and Minister of Information and Telecommunication Abdullahi Emloge Hirsi.