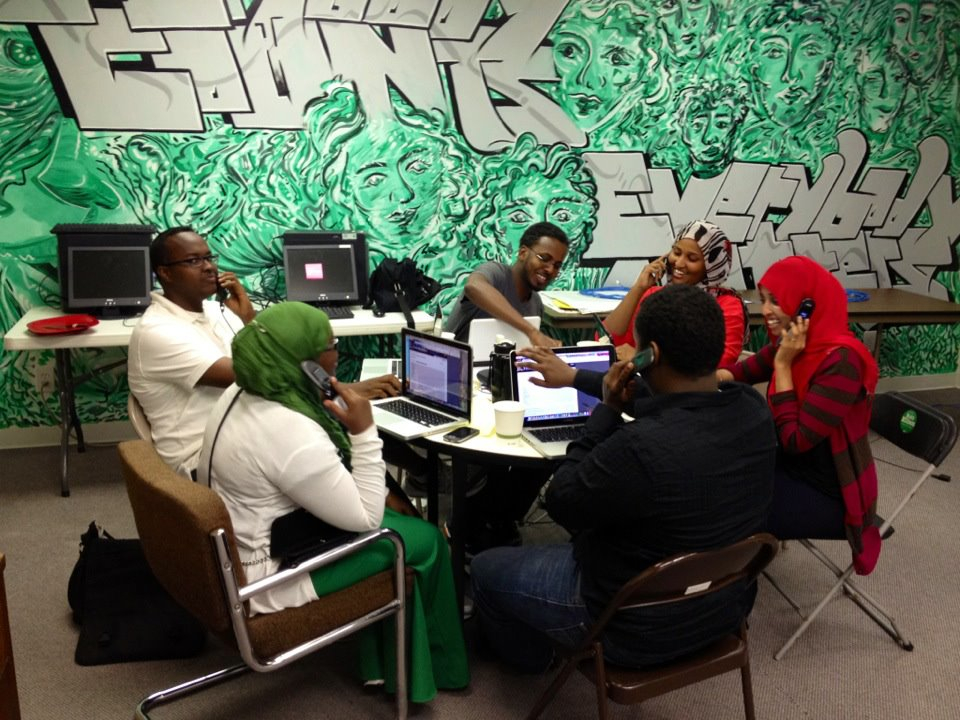 “We aren’t just guests in this country,” said Hashi Shafi, Executive Director of the Somali Action Alliance. “We’re Americans, and we need to make our voice heard.” Shafi, who has been trying to engage voters for more than ten years, is targeting Somali voters, hoping to bring them all out to cast their votes. “It doesn’t matter whom they vote for,” Shafi said. “We just want them to vote.”

During a visit to Congressman Keith Ellison’s campaign office in Minneapolis, one could hardly catch the attention of the half dozen Somali-American volunteers whose ears were glued to cellphones as they worked on reaching a massive phone-banking goal.

Gathering around a table, the volunteers fired voting registration questions at potential voters on the other end of the phone, hardly paying attention to what went on beyond the green graffiti-painted room in the 2525 E Franklin Avenue building.

Going through a list of phone numbers and home addresses of voters in the Fifth Congregational District, they executed one phone call after another. This has been their daily ritual since May, and they expect to continue until they walk voters to the polls on November 6.

The volunteers’ goal is to register voters before Election Day arrives in less than a month, even though many politically uninterested residents hang up on them.

“Voting is power,” Rep. Ellison Re-election Campaign volunteer Faiza Hassan said of the reasons she wants to encourage the community to vote. “And it’s important to use that power.”

For five months now, when Hassan isn’t working at Regions Hospital as a youth health coordinator, she hastens to volunteer in educating her community about the voting values.

“Get involved in the politics,” Hassan tells community voters in St. Paul and other cities in the state. “If you feel something isn’t working well in politics, then make a difference with your vote.”

The number of immigrants turning citizens in Minnesota has been growing drastically in recent years, said Shafi.

Last year, the state welcomed over 11, 000 new citizens, the highest number in the past ten years, according to the U.S. Department of Homeland Security’s 2011 Yearbook of Immigration Statistics.

The Minnesota-Somalis make up approximately 75,000 of the Minnesota population, with nearly half of the number being eligible voters, a local estimate said.

And local campaign officials are taking notes on this number.

“We have an entire department dedicated to outreach with Somali-Americans,” said Matt Roznowski, communications director for Re-Elect Keith Ellison for U.S. Congress. “We’re proud to have people from all communities, including Somali-Americans, volunteering on our campaign every day.”

The office even runs a weekly “Volunteer of the Week” article on its website, which has featured stories about several of Somali-American volunteers, including Hassan.

During the last election cycle, Shafi said he and his team went all the way to Willmar and Rochester, knocking on over 2,000 doors.