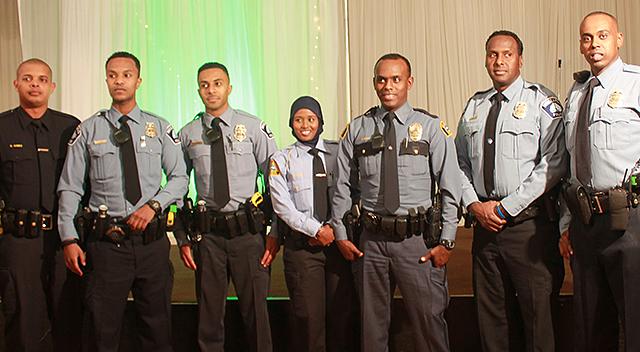 Cheers and laughter filled Safari Restaurant and Event Center in Minneapolis Wednesday night as members of the Somali-American Police Association (SAPA) presented the organization’s mission and service to the community — with lots of jokes.

“One day, a Somali woman was caught speeding,” said Mukhtar Abdulkadir, a Minneapolis police officer. “A police pulled her over. She was so nervous and fearful while she waited for the police [to] come to her window. Then she glanced at the window. Realizing the officer was a Somali, she said to him, ‘Oh, you scared me. I thought you were a real police officer.’”

Wearing his crisp blue police uniform and a black tie, Abdulkadir chuckled at his joke, and the nearly 100 Somali-Americans in attendance broke into laughter and cheers.

But jokes aside, the gathering was meant to introduce SAPA to the community, to showcase the contributions of Somali-Americans and to punctuate the integral role the Somali community plays in their adopted homeland.

The national police association has members in cities across Minnesota, New York, California and other parts of the country.

Established in 2012, SAPA aims to provide resources to Somali-American law-enforcement professionals, to recruit, inspire and mentor Somali officers, and to bridge the gap between police departments and Somali communities across the country.

“The reason SAPA was created was because of a need that came out of the Somali-American police officers to have an organization where they can network, but also help the community if the need be,” said Siraach, works for Minneapolis Metro Transit Police. “We also mentor young officers. You know, the police industry is not an easy industry. You need some type of a support system in place, and we provide that to people.”

Present at the event were a dozen Somali-American officers in uniform from various agencies, including Metro Transit and police departments in Minneapolis, St. Paul and Mankato, among others.

Like many minority groups across the nation, Somali-Americans have had a strained relationship with law enforcement.

Over the years, there have been reports of members of the Minnesota Somali community who were intimidated and threatened by the FBI during interrogations involving terrorism cases. And the story of the 2002 death of Abu Kassim Jeilani, an unarmed, mentally ill Somali man shot and killed by Minneapolis police, seems fresh in the minds of many Somali-Americans.

With the number of Somali officers in the state on the rise, however, relations between the community and law enforcement have improved, Siraach said. “We’re ambassadors. Since Somalis started joining the police departments, you can definitely tell how the perception of police departments changed,” he said. 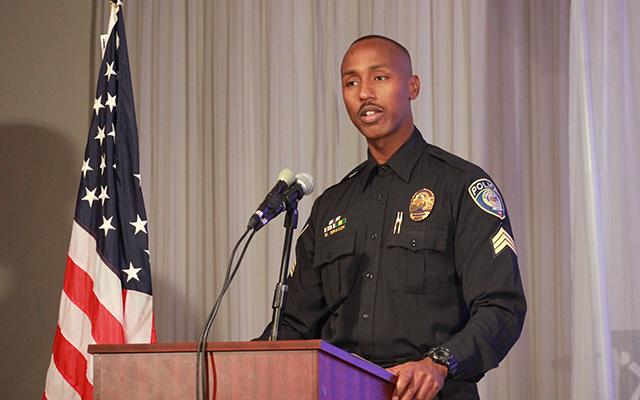 Before he became a police officer, Siraach was an aspiring engineer at Normandale Community College in Bloomington. But in 2002, documentaries and television shows he viewed about the risks and rewards of law enforcement inspired him.

“I fell in love with becoming a police [officer]” he said. “I felt I could make a difference within my community.”

Siraach realized that there were not many Somali police officers and he thought he could be an asset to the Minneapolis department. So, in 2007, he joined the department, hoping to not only serve the Somali community, but the community at large, he said. Now as a sergeant, Siraach supervises the investigation unit of Metro Transit Police.

And as the spokesman of SAPA, Siraach has a message for his community: “We’re your resources. We’re here to protect you. Trust us. If you witness a crime, call the police. Safety is a shared responsibility. The police alone cannot solve problems. We need the community and the community needs us. So we have to work together.”