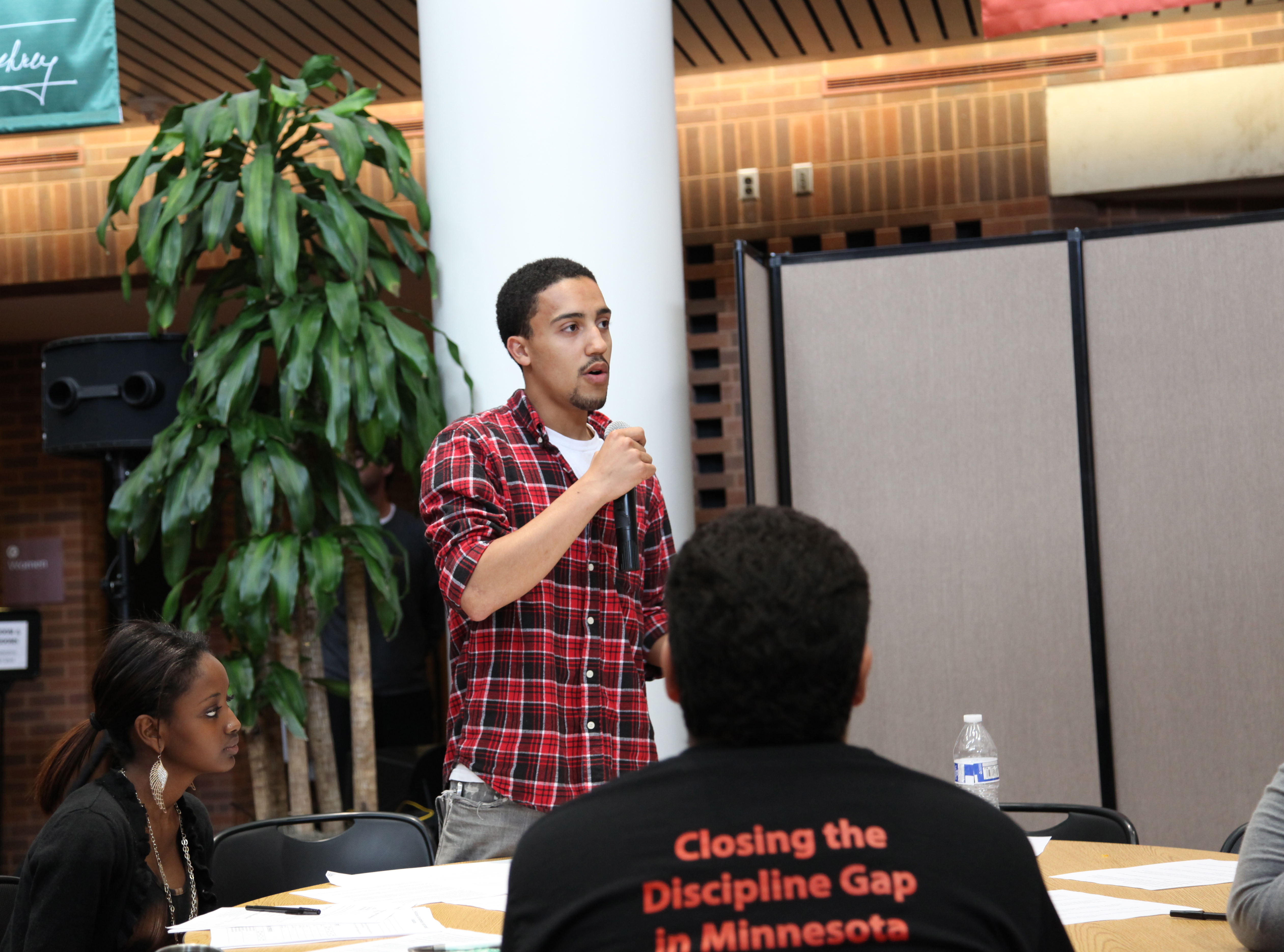 Jeron Mariani of the Youthrive organization (speaking) and Malika Musa, a student from Hopkins High School. (Photo by Christina Cerruti)

About a hundred middle and high school students from the Twin Cities metro area gathered at the Solutions Not Suspensions summit at the Humphrey School of Public Affairs of the University of Minnesota on May 11. They came to share their experiences with discipline procedures in their classrooms and to discuss how they think disciplinary action should be in their schools.

“We want to give them the tools that will allow them to have informed conversations with people in positions of power at their school about what the discipline at their school looks like and how to make it more equitable,” said Brandon Royce-Diop of the Minnesota Minority Education Partnership (MMEP), who organized the event with his MMEP colleague Cymone Fuller.

In addition to watching performances by spoken word poets and a presentation by youth advocates testifying to pass the Dream Act in Minnesota, the students spent the day absorbing facts and tips from speakers such as youth mentor and advocate Anthony Galloway, who outlined constructive ways youth can connect with adults at their school and get them to listen.

Civil rights lawyer and law professor Nekima Levy-Pounds delivered a powerful presentation about the School-to-Prison Pipeline, which is a serious issue that impacts many young people of color. According to Pounds, the School-to-Prison Pipeline refers to what happens when children are suspended, expelled, given a citation, or in some cases even arrested for incidents that happen during the school day. Her presentation included outlining some rights that students have in school and steps students can take to protect themselves in disciplinary situations that may carry legal consequences.

After placing calls from their cell phones to the District Superintendent for Minneapolis Public Schools demanding “solutions not suspensions,” the students broke into smaller groups for a “brain-releasing” session, where each group listed suggestions and concerns that they had in their schools and then shared those thoughts with each other. School Board member Richard Mammen was on hand during the session and encouraged students to talk to teachers and staff at their schools as well as their parents.  “I think (students) should expect the best. I think you should expect justice and when you don’t see it, I think you should say ‘hey, why didn’t that happen? Where is the accountability?’” said Mammen.

Sara Osman, a senior at South High School in Minneapolis and co-chair of the Students Together As Allies for Racial Trust (S.T.A.R.T) thinks that programs like the Youth Summit should happen at every school so that students know their legal rights.

“People shouldn’t use the excuse that they didn’t know that they were going to get in trouble before they did whatever they did,” she said.  Osman believes that walk-outs, like the ones at Hopkins or South High are “ a sign that students are now coming to comprehend what sort of power that they have but it is also a sign of unrest, that there is something wrong with the administration.”

Osman thinks that a walkout should be seen as a last resort and that actions like listening sessions, where students could sit down with members of the school administration and talk out problems that they have with issues in schools, could prevent large-scale actions that disrupt the school day. Osman added she was shocked to learn about “your juvenile record being there until 28, I though 18 was the limit,” she said, which Levy-Pounds discussed in her “School-to-Prison Pipeline” presentation. “I thought that I wanted to go into law before this (Summit) but now this feels like I have to,” said Osman.

The Solutions Not Suspensions campaign has been working with youth and community members to make their voices heard as the Minneapolis School Board gears up to rewrite school discipline policies and procedures. “All the youth here (at the Summit) and their voices today are going to be embedded in the recommendations that we make for the new discipline policies for the district of Minneapolis,” said Royce-Diop.

If you are a student or community member looking to get involved with the Solutions Not Suspensions campaign, you can contact Brandon Royce-Diop at Brandonrd@mmep.org. 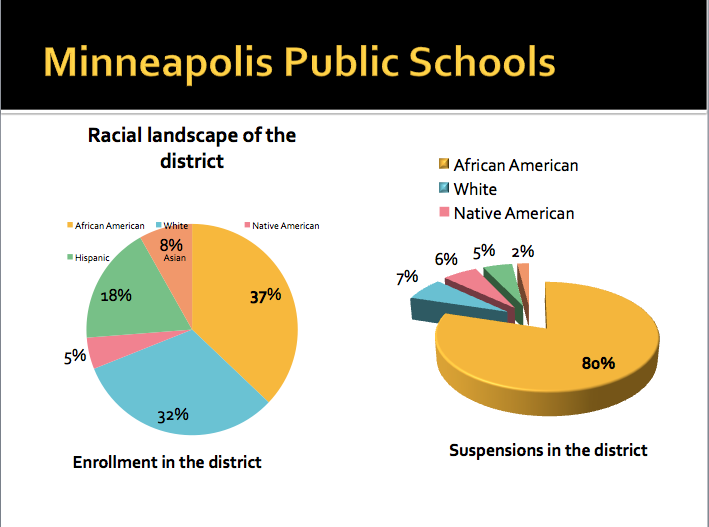 Chart shows difference in racial proportion of enrollment in district versus suspensions in district. Courtesy of MMEP, from presentation at the summit. 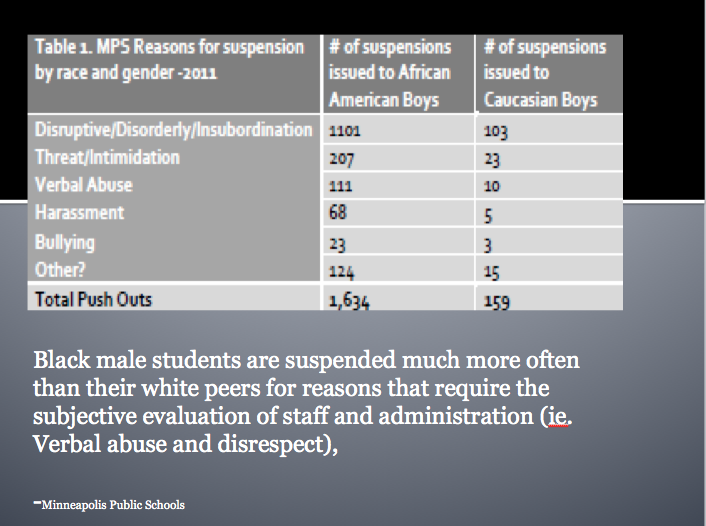 Chartabove  courtesy of MMEP, from presentation at the summit 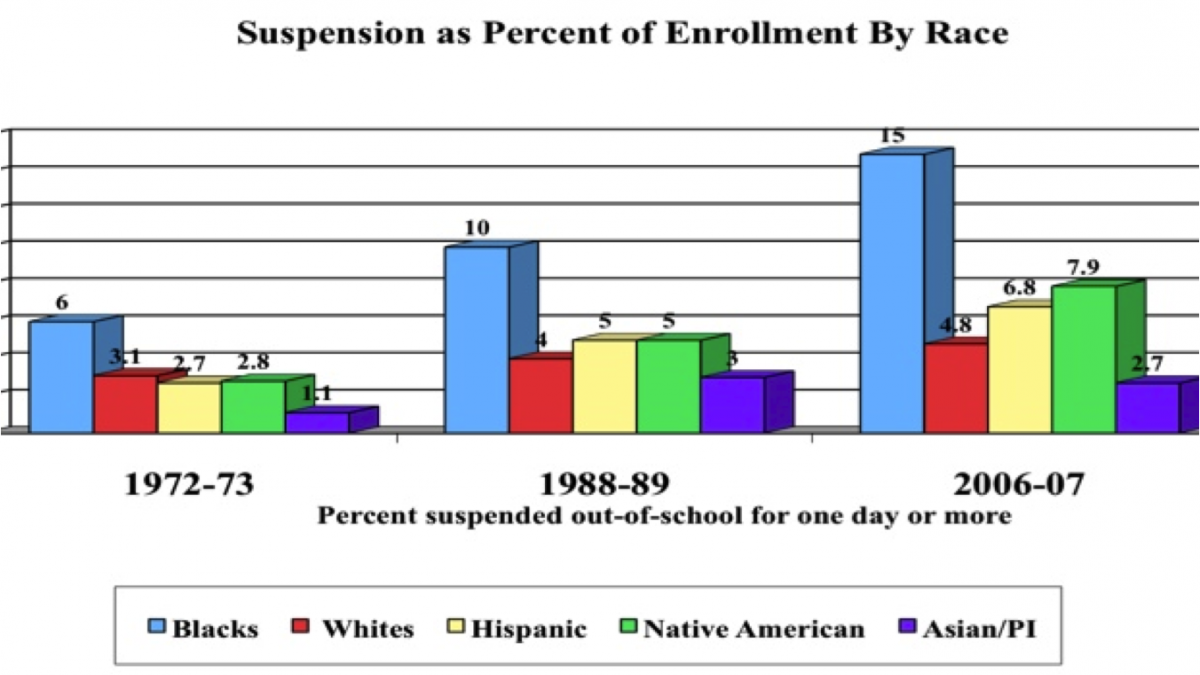 Chart shows national increase in suspensions from 1972-2007, and suspensions as percent of enrollment by race. In 2006-2007, for example, 15 percent of Blacks were suspended, compared to 4.8 percent of Whites. Courtesy of MMEP, from presentation at the summit

Black suspensions more than double other students’ in suburban schools