It’s not just that it’s hot. It’s the stifling stillness that has settled in over the center of the continent that slowly suffocates, like a python wrapping around its prey. A year that started out promising, with plenty of warmth and rain early on, has turned deadly for crops throughout the grain belt of the US.

The price of corn has shot up 40% in the last month as a terrible harvest falls ahead of brown, dead stalks grimly standing in the fields. As much as a third of the grain belt states is in “severe drought” conditions, and it’s likely to only worsen. This is the kind of shock our economic system simply cannot handle right now, already weakened by bumbling in financial centers far from where people do actual work.

What has caused such awful weather? It’s always hard to say exactly, but we can be sure this will last a while longer – and it is too late for most of the crops.

The real bottom line on the weather is a simple one – the jet stream has died. This is normally what drives mixing between wet southern latitudes, around the Gulf of Mexico, and the plains states. Without a strong zonal flow high above our heads there is nothing bringing up the wet that needs to fall as rain. Take a look at this polar view of the jet stream, in dark grey:

Note that there isn’t much grey there at all. Where we should expect a band running around the planet like a river of air, there are patches. That’s what has gone wrong, but why?

No one can say for sure exactly why this happens, but we all know it is far from the first time. The dustbowl drought, which last peaked in 1936, was followed by a strong drought in 1958 (which set off a recession) and again in 1980 (same). They were running every 22 years, although this one is closer to 33. These match the peaks of solar activity as sunspot maxima, the years when the sun is the active with a peak level of flares, every 11 years. Not every sunspot maximum has such a harsh effect on weather, and the effect is not precisely cyclical – but it has patterns.

This is likely the origin of the Kondratieff Waves that define business cycles and generations. Our own activity exacerbates the effects and makes them into a human story.

This year, however, there is a lot more to the solar cycle. In 2009 sunspot activity went to zero for the first time in over 50 years, marking the end of the “Modern Maximum”. Solar activity, as measure by the flares we see as “spots”, is at a 100 year minimum right now. Over time, this could mean that the atmosphere should see some cooling as it responds to a lower overall solar output. But that does not mean that the sun is dormant. 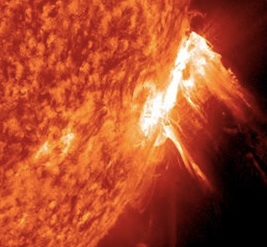 Starting in May, a series of “Coronal Mass Ejections”, or very big and nasty flares, shot out towards Earth. The last big one hit us on July 14th, a shot that lit up the northern lights as a wave of ionized particles sparkled the atmosphere. While the sun is clearly entering a more quiet phase than we’ve seen in a century, it is apparently blowing off the last of the energy from the previous cycle in a few bursts.

Does this influence our weather? The short answer is that it has to, but no one is exactly sure how. We know that there were similar bursts that interrupted radio communication at the start of the Dustbowl in the 1930s, but these things do happen fairly often. They seem to charge up the Earth’s magnetic field and provide a bit more shielding from cosmic rays, which in turn may block the latter’s ability to form high clouds way up at the boundary of the stratosphere.

I can tell you that many of my friends have been suffering from depression and anxiety in the last week. It’s an unscientific poll by any measure, but with the oppressive heat and perhaps a kick from the ionized atmosphere life is out of whack. It’s affecting everything in strange ways, possibly including the karmic balance in our own minds and bodies.

What will it take to re-start the jet stream and get our weather back on track? It is too late for the crops, which come into maturity in July. For the rest of us, the end of the nasty big solar flares would be a good help. But this is our sun, and little tantrums or not it is responsible for all of the life on this wonderful planet. A few bad years come with everything our sun provides – but even those are somewhat predictable.