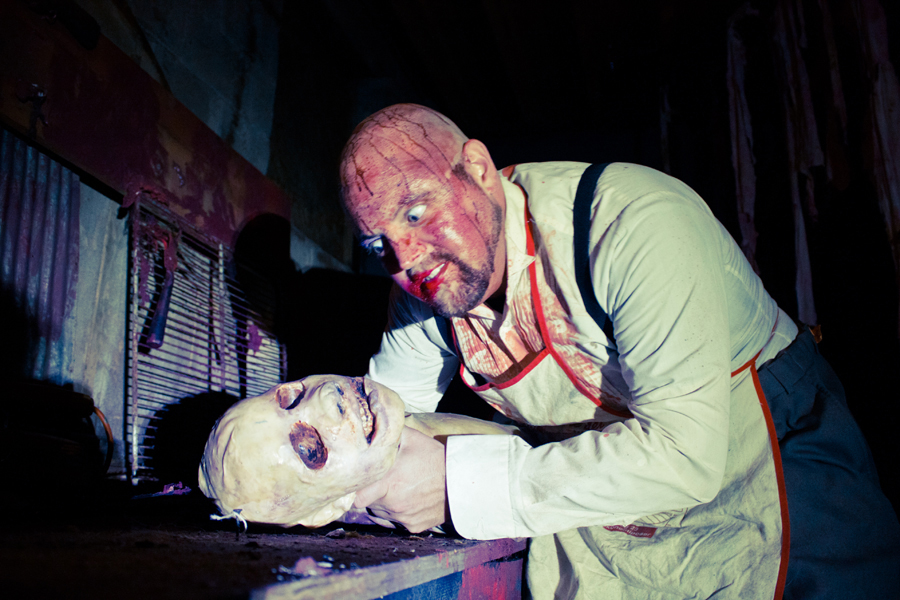 Now in its fifth year, the Soap Factory’s Haunted Basement continues to be a popular attraction. On opening day, minutes before it actually opened, there was already a line out the door. Patrons ranged from “very excited” to “why am I doing this,” and I was somewhere in between those. I was in the first group of the season, and after meeting two of the other girls, it was obvious I was probably the bravest.

The Haunted Basement is a maze of artist-designed rooms meant to creep you out more than truly terrify you. The scariest part was simply descending the stairs away from the security of the gallery and seeing what was behind the ominous black curtain at the bottom. The answer, of course, was nothing—just blackness. I led my group through the darkness aided by a rope, all the while prepared for something—anything—to jump out at me. At one point, I felt a hand touch mine, but that could easily have been one of my frightened new friends.

As we finally approached some light, we had our first run-in with an actor who looked a lot scarier than he really was. This was the case for nearly every room in the Basement. I began to wonder if I was simply immune to scary things, because I spent most of my time laughing.

The rooms themselves are incredibly well-executed. The artists added detail where you wouldn’t have realized it was necessary. This helps create a realistic experience most other haunted houses lack. In addition to scenery, the costumes are creative and fit well with each environment. The actors did an amazing job of staying in character, no matter how difficult my group may have been. However, this is where my first bit of criticism comes in.

Before entering the Basement, we were told that the actors would not touch us; they may get in our faces, but there would be no touching, and thus, no reason to defend ourselves. Well, surprise, surprise: they touched me. A lot. Upon entering a room of ribbon dancers, my strategy was to push through without actually looking at them. (This was my strategy for the whole experience.) One of the dancers used his ribbon to trap me, and when I escaped, his arms and legs. My group members simply watched as I struggled to escape from this guy, and I wasn’t scared, I was frustrated. Later on, after I was blindfolded and separated from my group, I was touched all over while being transported to my coffin. (Yes, you read that correctly.) Mind you, the actors were great. They kept whispering, “This one is mine! I want to play with this one!” but all I could think was, “Why did they lie to us? And how could this possibly be effective without touch?”

My second large criticism deals with the lack of a scare. The Basement was challenging at times, wet at others, and just downright disgusting. However, I only screamed once, and that was when I thought I lost the rope in the pitch-black entry. The rooms were confusing, and I often had no idea of their purpose. Were we supposed to stay in them longer to experience the scare? One room, set up like a 1950’s living room with actors drinking cocktails watching a film, allowed us to waltz right through. It was cool to see, but not very scary. At another point, we were trapped at a dinner party for an excessive amount of time with no idea what the actors wanted from us. They hinted at us eating some moldy spaghetti noodles, but that was it. We waited it out until one of them moved, allowing us to continue on.

The end of the experience was probably the scariest for most patrons; this is where the artists tap into as many phobias as they possibly can, and if one of them is yours, you’ll probably cry “uncle.” (I, on the other hand, was escorted to the exit for being heroic and trying to save my screaming group members.)

Overall, the Haunted Basement is a sight to see, but I certainly would not pay $21 for it. Save yourself the cash and rent a few scary movies. If you’re not easily spooked, the Haunted Basement will mostly be a step up from a gore-themed gallery exhibition with some putrid smells thrown in. But if you get scared from simply being in the dark, you might actually get a thrill.