Riverside Plaza tenant Ruqia Abdi -- with her daughter, Amina -- is looking forward to the coming reconstruction. Photos by Karen Hollish.

Southwest High School student Kamal Berhe was born in Ethiopia, made his way to Kenya and then, four years ago, moved from there to the United States.

Today the 19-year-old and his older brother share a two-bedroom apartment in Riverside Plaza. He’s looking forward to the nearly $55 million, 22-month renovation project that’s set to start this January.

“I think that it’s a great idea,” Berhe said Monday, taking a break from checking Facebook on a computer at the Riverside Plaza Tenants Association. “I think for safety.”

Improved outdoor lighting, way-finding guides and security cameras are just a small part of the major changes expected from the reconstruction. The nine residential buildings will have their heating, cooling and ventilation systems overhauled, resulting in energy savings for the landlord and more consistent apartment temperatures and hot water access for tenants.

“We’re going behind the walls in every single unit in the property,” Project Manager Chris Sherman, of the property management company Sherman Associates, said Wednesday.

Built in the early 1970s, the Plaza houses 1,303 apartment units, nearly half of which are subsidized under the federal Section 8 housing program.

The person who perhaps best knows all the Plaza’s apartments is Gordy Willey, who’s been the plant manager for more than 30 years.

On Wednesday Willey took the Daily Planet to an unoccupied apartment in the Chase building. It’s being used to show contractors just what’s waiting for them behind the walls and to test coming renovations.

The drafty patio doors and windows, long a source of tenant angst, will all be replaced, Willey said. Their copper hot water pipes, which were not insulated during the Plaza’s original construction, will be insulated, too.

A new automated feedback system will let Willey and his maintenance staff of 20 know about mechanical problems before they get out of control.

“Rather than waiting for the tenant to say, ‘I don’t have any hot water,’ it will show up on the computer,” Willey said.

They’re in the process of seeking historic preservation status on the property, and so all the reconstruction plans have been drafted with this in mind, Sherman said.

Willey said that means the colored outside panels will be restored to their original blue, red and yellow tints. The peach-colored blocks will go back to slate gray, their hue when the facility was first built. Trees will be planted in the open spaces, returning the Plaza’s communal areas to their more verdant roots.

Tenants should expect to be displaced from their apartments for three to four weeks, during which they’ll stay in furnished, hotel-style units in the Plaza.

“It’s going to be an inconvenience for people,” Sherman said. “But we’re trying to do everything we can to make sure it’s as easy as it can be.”

Many tenants use land line telephones, and these numbers will be forwarded to their temporary apartments, Sherman said. The management company will staff a 24-7 call line in case tenants have problems, and they’ll be airing construction-related information in up to five languages on the Plaza’s local television station, Sherman said.

Back out in the Plaza’s open space, eighth-grader Fathia Hassan, a student at Cedar Riverside Community School (CRCS), said she wasn’t particularly looking forward to the reconstruction.

“We kind of like this place, our apartment, as it is,” she lamented.

“But the school is actually going to be rebuilt,” she added, “which is good.”

Steps away Ruqia Abdi walked with her 6-year-old daughter, Amina. Originally from Somalia, Abdi has lived here for ten years and now has U.S. citizenship. Her three children attend CRCS, and she volunteers in her daughter’s kindergarten classroom several hours each day.

As a Plaza resident, she’s excited about the coming reconstruction—especially the upgrades planned for the school.

Shamso Hashi, who lives with her three sons on the 24th floor of M building, is eagerly anticipating the ventilation improvements.

When she cooks family meals the heady smells seep into her clothing and linger, she said.

“When you go another place, they say, ‘Did you make rice?'” she said, laughing with her friend Aniso Mohamed about the apparently common predicament.

They’re looking forward to all the improvements to their home, Hashi added. 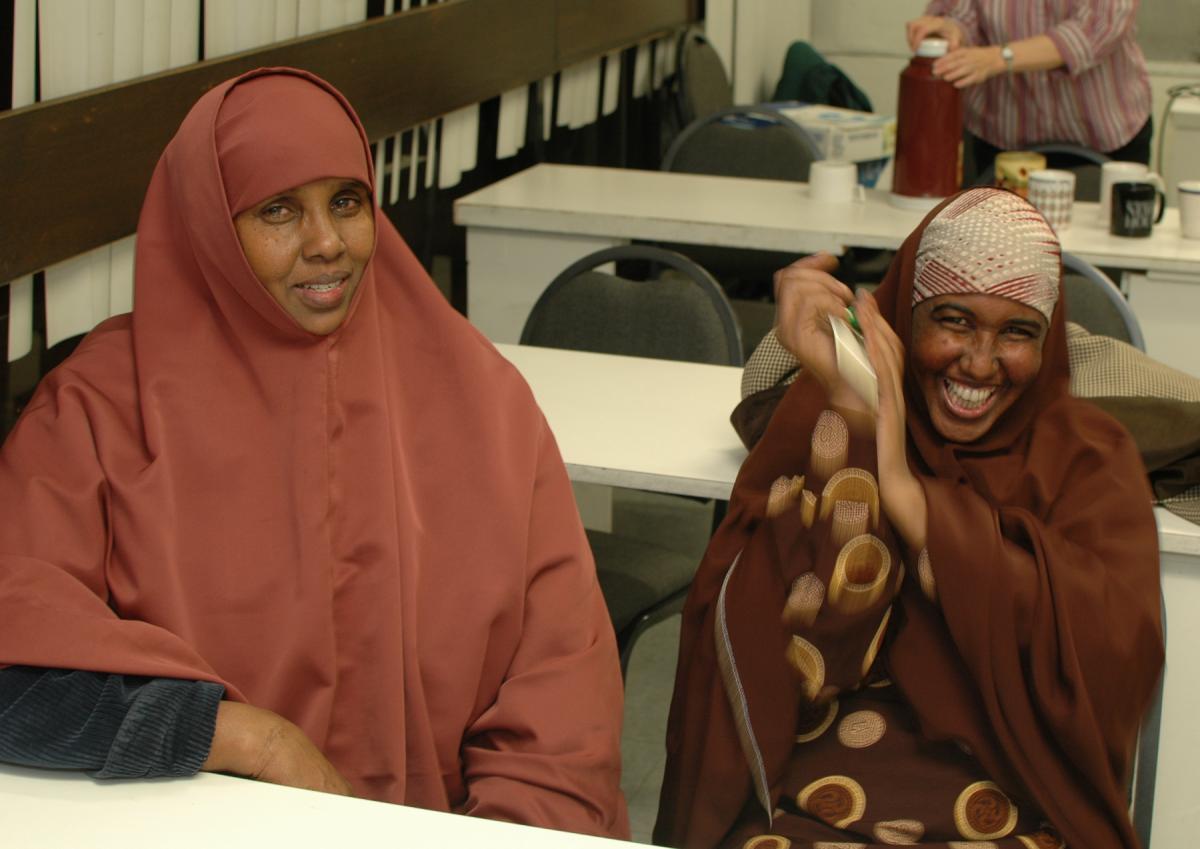 Hashi, above left, with Mohamed, during their English as a Second Language Level 4/5 class.