Snow again—and with all the attention paid by the news media, you’d think snow in December in Minnesota was something unusual.Traffic jams started in early afternoon, followed shortly by snow emergency announcements from both Minneapolis and St. Paul (details below). 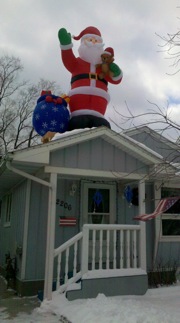 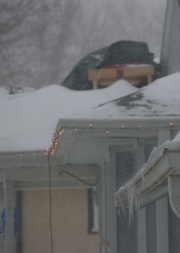 On my street, there’s a Santa snow barometer. The neighbors’ Santa is up when the sun shines, deflated during storms.

How much snow this time around? At press time (about 6 p.m.), about four inches had fallen in St. Paul. Forecasts varied, with the total amount by morning predicted at somewhere between five and eight inches. Forecasts, of course, are subject to change.

How much snow do we have on the ground? Bob Collins has the best take on that, with calculations on whether Minnesota has enough snow on the ground to cover the entire country, or even the entire world. “Heck, we’ve got plenty to share,” Collins notes, “and you know you’ve asked the question “where are we going to put it?” at least once today.”

Minneapolis and St. Paul are working hard to answer that question, with snow emergencies declared in both cities, effective at 9 p.m. Monday, . This gets especially confusing in Minneapolis

The Vikings’ first outdoor game since 1980 takes place tonight (December 20) under snowy skies. Traffic snarls, parking shortages, and a snow emergency make the Bears the least of the Vikings’ challenges. The San Francisco Chronicle looks back fondly at the good (c)old days in Bloomington:

No way any member of the NFL‘s legendary Black and Blue Division (the Green Bay Packers, the Minnesota Vikings, the Chicago Bears and the Detroit Lions) should be allowed to play home games under anything that isn’t either sunny, cloudy, dreary, rainy, sleety, snowy or just plain scary.

So the fact that the Vikings will go back to the future on Monday night in Minneapolis by playing outside against the Bears is . . . Brrrrrrrilliant!

Football fans will not be the only ones whose night out is affected by the weather. Tonight’s winter solstice celebrants looked forward to a full lunar eclipse, but that won’t be visible through the snow.