Minnesota’s Republican Party may have used the same illegal method to fund its 2011 redistricting fight as it used to fund the Minnesota 2010 Gubernatorial recount, but this time it may have also violated a Minnesota law that prohibits corporate contributions to political parties.

Last week the Minnesota Campaign Finance Board fined former Minnesota Republican Party Chair Tony Sutton $3,000 for using a non-profit company to hide donations intended to help the party pay legal bills for the recount. Common Cause of Minnesota says it will announce today that it is pursuing a felony criminal complaint against Sutton and the founders of the non-profit company “Count Them All Properly” (CTAP) that could result in a five-year jail term. But an email uncovered in that investigation could open a whole new case against the Minnesota Republican Party.

Buried in hundreds of documents released from the Minnesota Campaign Finance Board is an email from then state Republican Party Chair Tony Sutton that seems to indicate the party would be setting up a non-profit corporation to cover its legal bills for the redistricting court fight. The email was dated January 19, 2011. Two days later Minnesotans for a Fair Redistricting filed with the Minnesota Secretary of State’s office for non-profit status.

“As to redistricting,” Sutton wrote in the email, “we will be creating a 501-c4 (which can take corporate donations and as such will be MUCH easer to raise money for than the recount fund). We did this ten years ago and that organization covered all our legal bills.”

The email was addressed to former Minnesota Supreme Court Chief Justice Eric Magnuson who served as legal counsel to the Republican Party for the 2010 recount. “If you are interested, I will put your name forward to possibly be part of our legal team,” Sutton continued.

Magnuson ended up representing a Republican backed group before a special redistricting panel in 2011.

Last week the Minnesota Campaign Finance Board found Sutton had circumvented Minnesota’s disclosure laws because donations were directed to a non-profit corporation to avoid disclosure.

Minnesotans for a Fair Redistricting is not registered with the Minnesota Campaign Finance Board and has not filed any reports with it.

Minnesotans for a Fair Redistricting could be forced to reveal its donors if a successful Campaign Finance Board complaint is filed against it. Common Cause of Minnesota is considering filing a complaint similar to the one it filed against the Minnesota Republican Party for CTAP. 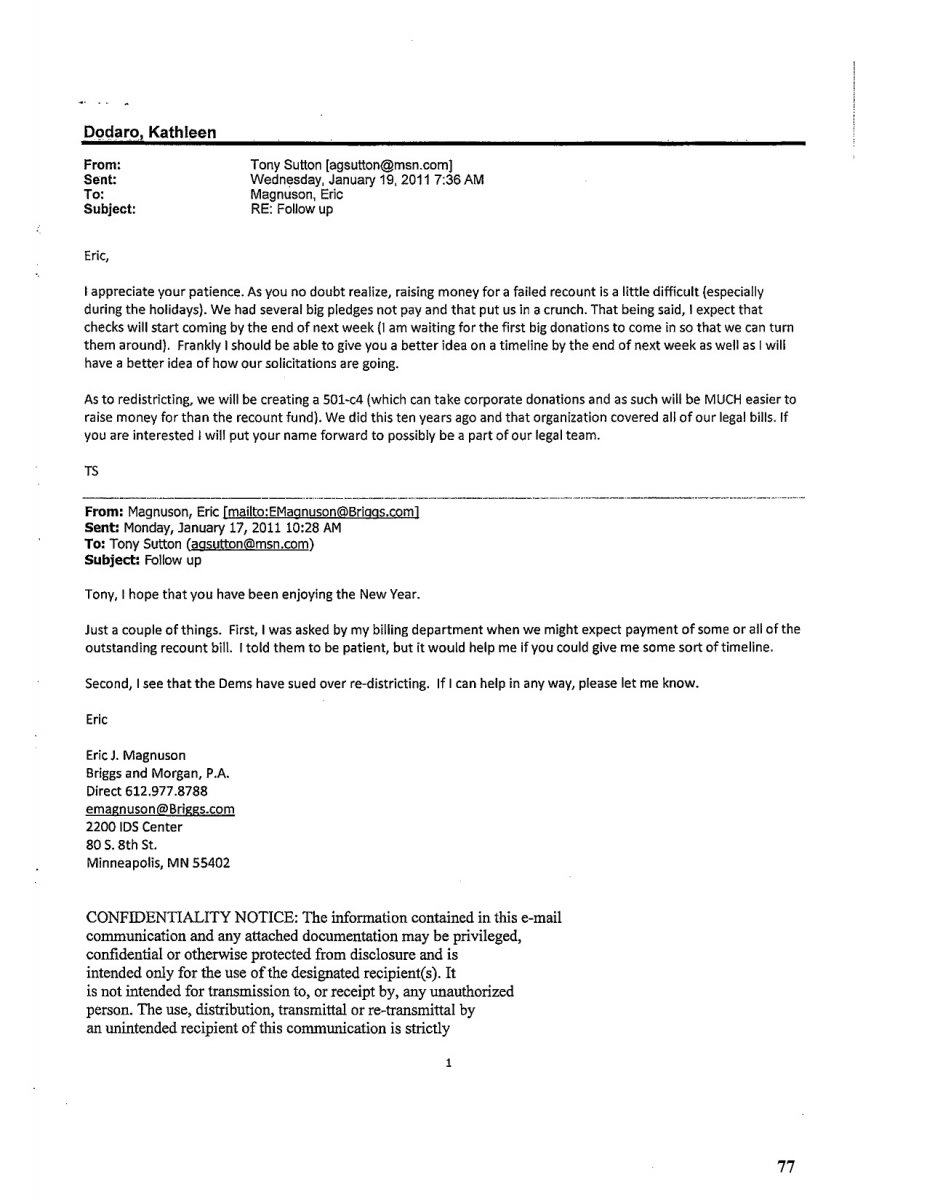 Left: This email from the former chair of the MN GOP could lead to a new campaign finance investigation

Corporate donation that could be illegal

The New York Times reports that at least one corporation donated $10,000 to Minnesotans for a Fair Redistricting. Drug benefit manager Express Scripts, a major drug benefit told the Times it had made the donation, previously unreported, because the “electoral maps in Minnesota were in doubt and we supported efforts to bring certainty to Minnesota voters,” said Brian Henry, a spokesman for the company, which is based in St. Louis. He added that the firm has a facility in Bloomington, Minnesota.

“If that is the case and we are able to determine that the Republican Party did in fact create that fund, it was essentially an arm of the Republican Party, that actually would be an illegal contribution because political parties are not allowed to accept corporate contributions,” says Mike Dean of Minnesota Common Cause. “And so that would be a violation of (Minnesota statute)211b.15, which bans that which actually carries a very severe penalty.”

See video at the top of this page for the full interview with Dean.

That Minnesota statute was revised after the Supreme Court’s “Citizens United” ruling which allowed corporations to spend on elections. The Minnesota statute says “A corporation may not make a contribution or offer or agree to make a contribution directly or indirectly, of any money, property, free service of its officers, employees, or members, or thing of monetary value to a major political party, organization, committee, or individual to promote or defeat the candidacy of an individual for nomination, election, or appointment to a political office.”

The donations to Minnesotans for a Fair Redistricting apparently haven’t paid off the redistricting legal bills. The lawyers that did represent Republican interests in the redistricting process have tried to bill the state for $225,000 in fees and nearly $21,000 in costs. Magnuson charged $620 an hour for his work. The state opposed that request.

Criminal complaint on 2010 violations to be filed Thursday

Dean will announce Thursday that Common Cause is pursuing a felony criminal complaint against the two main officers of Count Them All Properly and Sutton. Since the crime is a felony, they could face a five-year jail sentence and a $20,000 fine if charged and found guilty.