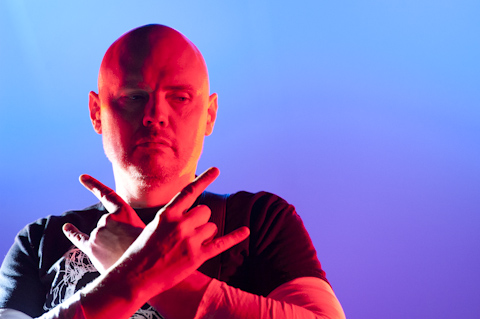 It’s been over 14 years since my first concert—The Smashing Pumpkins at Milwaukee’s Marcus Amphitheater. There’ve been over 100 others since, but that first one still shimmers in my mind, as if singer, guitarist, and songwriter Billy Corgan and the other Pumpkins had transported that crowd onto the dreamy set of their “Tonight, Tonight” music video. So I’m biased.

My music education began a few years before that concert and featured two albums. In a recent essay, I outlined how Rage Against the Machine’s Evil Empire threw me down a political path, but it was the musical landscape of the Smashing Pumpkins’ Mellon Collie and the Infinite Sadness that laid bare all the potential of rock and roll—from somber title track, to the droning “Where Boys Fear to Tread,” to the epic “Porcelina of the Vast Oceans,” to the crushing waves of screams, drums, and guitars in “XYU.”

It seemed as if Billy Corgan was writing not only the most shocking, engrossing, and bold music I’d ever heard, but also sung with the same confusion, frustration, and pain I felt as a boy entering his teens. Perhaps the best example is in the opening line of “Muzzle”: “I fear that I am ordinary, just like everyone.”

I highlight how dependant The Smashing Pumpkins’ music was and is on Billy Corgan’s own life and worldview, because, as evidenced by their fine new album, Oceania, and their performance at the Roy Wilkins, it doesn’t matter that Billy’s run off all the other original members—D’arcy, James, and Jimmy. They weren’t the critical variables.

I was nervous climbing the stairs of the Roy Wilkins to my seat in the balcony. For many Smashing Pumpkins fans, this year’s Oceania was a relieving wonder after a 2007 comeback with the rightfully-maligned Zeitgeist, an album made of a mix of impossible loudness and corporate, Protools slickness. On this tour, the Pumpkins have played Oceania straight through during the first half of each set. But even with Oceania, there’ve been plenty of missteps for Corgan since “Ava Adore,” “Today,” “Bullet With Butterfly Wings,” “I Am One,” and even “Let Me Give the World to You.”

Then the show started, and jeez. It was sound and light and I was back to that July 5, 1998, on the grassy hill of the Marcus Amphitheater with my parents, my friend Adam, and the year-older girlfriend who’d break my heart in six short weeks when she started high school, leaving me behind in the eighth.

All that sound and light began with a blistering “Quasar” followed by “Panopticon,” a track that captures so well the shoegazing and loud/soft dynamic on which Corgan made a career.

Corgan and the Pumpkins were overwhelming in those first eight minutes. As if through reflex:

It was their wall-of-sound guitars, the toms and kick hammering, and the giant projection screen globe hanging over the stage like something from space. For those first four songs I didn’t just believe, I forgot everything else—Zwan (who I actually liked and saw twice), Corgan’s solo album The Future Embrace (which I also saw him perform twice), and his former bandmates, D’arcy, James, and Jimmy.

My brain turned back on during the five-song-twenty-six-minute down-tempo middle of Oceania, a pacing which is perhaps my largest criticism of the album. I don’t mean that as criticism of those songs—more that given the time to catch my breath, I was forced to contemplate and reconcile the tamer and older Billy Corgan on stage with the Billy Corgan I think of when I listen to the Pumpkins at home. The Billy Corgan slashing at his guitar and snapping at the microphone like each chord and line were the most important thing in the world—as if he just wanted to be let out, like he was some rat in a cage.

Here’s what I came up with: he’s already accomplished that.

“The Chimera” ushered a rocking closure to the Oceania part of the Pumpkins’ set, followed by the beautiful “Glissandra,” “Inkless,” and “Wildflower.” He’s clearly proud of Oceania and Saturday’s performance showed any fan unfamiliar why.

The set’s second half, which Corgan described as when, “we’ll play some of those dusties…if we feel like it,” was packed with a collection of hits hampered only by its length. Though even if it went on for five hours Pumpkins fans could rattle off missed favorites—Marquis in Spades? Dross? Pissant? This is the curse of a prolific catalog and rabid fanbase.

The Pumpkins’ selections, given the time, did the job: “Space Oddity” (Bowie), “XYU,” “Disarm,” “Tonite Reprise,” “Tonight, Tonight,” “Bullet With Butterfly Wings,” “A Song for a Son,” “Zero,” “Cherub Rock,” “Mayonaise,” “Ava Adore,” and “Black Diamond” (KISS). The crowd cheered and sang along in the flashing stage lights like it was everything they could’ve hoped for. It really was great.

But Corgan’s not in the same place as when he wrote those “dusties.” Perhaps the song that stood out for pure energy—the song Corgan most throw himself behind—was the only “new” track of the second half—2009’s “A Song for a Son.” It reminded me of Corgan on SNL and Conan in the 90s, when “Cherub Rock” and “Bullet With Butterfly Wings” and “Muzzle” seemed larger live than they ever did on my parents’ stereo. When Corgan’s on, his visual and vocal performance—whether on rocker or ballad—is something so visceral and human that it can’t be captured in a studio or coaxed out by any producer.

This review’s taken a long time to write. Every few sentences I’ve gone back to my iTunes and Vimeo and relistened to songs, trying to draw comparisons, trying to capture exactly how Saturday night made me feel. But I just keep getting lost in everything this band has been for me, everything they’ve meant for its fans specifically and rock in general, and everything that Billy still could do.

Coverage of issues and events that affect Central Corridor neighborhoods and communities is funded in part by a grant from Central Funders Corridor Collaborative.