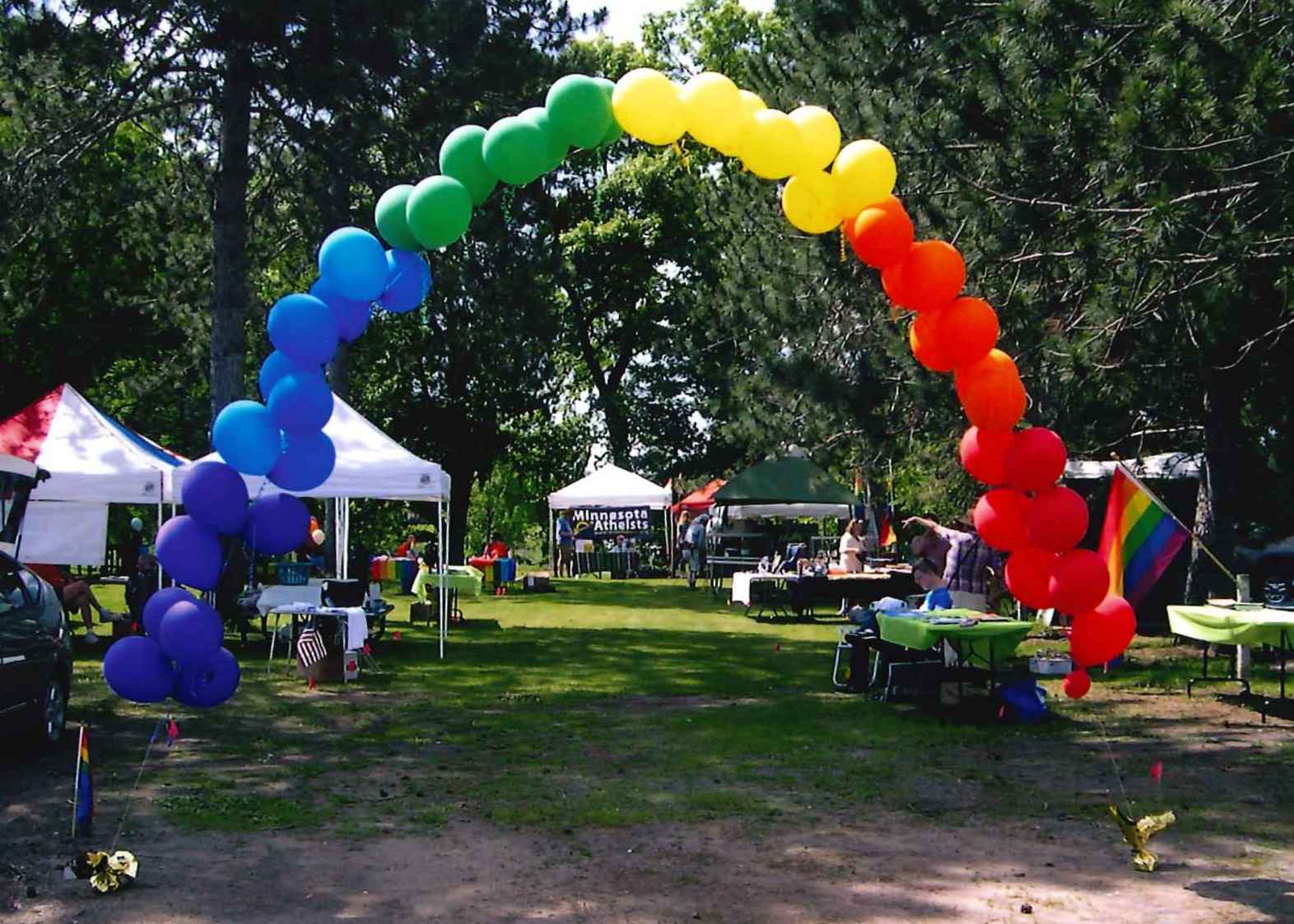 The entrance to Voyageur Park on pride day.

Sunday, June 1, Voyageur Park in Pine City, Minn. will again be the setting to one of the few rural LGBT pride celebrations in the world.  It is called ‘East Central Minnesota Pride’ and it has shown as much resiliency and staying power in this park over the 10 years as the lesbian, gay, bisexual and transgendered people of this region of the State have shown.

Rewind 15 years.   The East Central Men’s Circle—a gay and bi men’s group—was organized by the Minnesota Department of Health and the Rural AIDS Action Network to increase awareness of sexually transmitted diseases.  The men strove to bring together the rural community, whether they lived in one of the hubs of the region such as Pine City (pop. 3,127), or one of its tiny villages, like Askov (pop. 364).

So, in 2005, for their fifth anniversary, they decided to throw a pride and see what happened.   The first two prides, in 2005 and 2006, were mostly uneventful.  But, as the event grew, so did a contingent of opposition.

“Pro-family” picnics began to be held across town in the town square, in protest of the gathering in Voyageur Park.  They almost mirrored the pride; a barbeque with music and speakers.  And the event timeframe, noon to 5 p.m., was identical.

Messaging the event has always been about as controversial as holding the event itself.  Early on, some people were offended by advertisements circulated locally, including one that said, “It’s okay to be GAY in Pine City.” The ad featured a pink boa around the neck of a voyageur monument in the park where the event is held.   Later, the words “Happy Pride!” advertised on a community sign offended others.

Leading up to a gay pride in a Minnesota small town was an era when LGBT high school students like Alec Schroeder, in nearby Mora, were constantly being called inappropriate names, experiencing physical assaults, and having destruction of their personal property occur routinely.  Alec said he would even sit out of gym class and the locker room due to the threat of homophobic taunts.

Pride helped Alec, who said, “There are people out there who are fighting for you, and who love you just the way you are.”

Hearts and minds began to change about pride in Pine City over the years.  While the “pro-family” picnics were being held in response to pride, they never took hold and stopped being held after a few years.  While the first years of pride would bring about the occasional carload of teenage boys driving by shouting slurs, one of the local men’s softball teams showed up to express their support at a more recent pride.

This pride and this rural part of Minnesota have seen much change over 10 years.  2010 Census data showed that Pine City and its surrounding townships have become some of the gay strongholds of Minnesota, with the most same-sex coupled households of anywhere else outside of Minneapolis-St. Paul.

The need for the event has been evident in the event’s growth, from record attendance numbers to a record number of vendors, sponsors and supporters.  This year’s event is expected to be the biggest yet with the tenth anniversary celebration. A sign of progress, for the first time in a decade, the Pine City mayor will give the official welcome to attendees.

The event has been garnering the attention of some of the bigger names in entertainment as well.  While Michael Sam is the first openly gay NFL player, he was not the first gay player in the NFL; Esera Tuaolo was one of them, a former Minnesota Viking who performed on the pride stage last year and returns this year.

This tenth anniversary offers music, food and a rendezvous of friends, family and community.   While it is just a picnic of sorts, it is also a statement heard far beyond the region.

Invited to come are several public officials, including past-attendee Gov. Mark Dayton, and Rep. Tim Faust (DFL-Hinckley), who had a spotlight on him in the recent Minnesota same-sex marriage debate.

WCCO-TV’s Edward Moody is this year’s emcee.   Headlining pride is the bluegrass sensation Hey Lonesome, complete with a guitarist, mandolin picker, bassist, banjoist, and fiddler, as well as harmonizing vocalists.  Hey Lonesome is no stranger to East Central Minnesota, a regular at the Recfest Bluegrass Festival in Milaca.

Bigger cities across the U.S. have held prides for decades.  New York, Los Angeles, Chicago and San Francisco have had pride events, either marches or parades, since 1970.  The gay pride in Pine City began when it was just one of two rural prides in the nation to be held.

East Central Minnesota Pride has created one of the most unique pride events in the country, one that is generating a lot of buzz now in its tenth year.   In fact, it has grown to the largest small-town pride in the nation.   And, it is the first pride in the State to be held each year during what President Obama has declared as “Pride Month”, June.

The other Minnesota gay prides are in Fargo-Moorhead, Duluth-Superior, Mankato, Rochester and the Twin Cities, each of which are in metropolitan areas.  Since Pine City’s pride has proven successful, other Outstate cities such as Brainerd and Willmar have tried their hands at pride as well.  The event and the ways in which it is planned and organized have served as a model for other small-town gay prides that have formed across the State and elsewhere in the U.S.

This year’s theme, “A decade of change”, promises to combine the beauty of East Central Minnesota and its charming small towns with a growing awareness and celebration of Minnesota’s rural LGBT population.

Several businesses throughout the region support and help sponsor the event as well.  Additionally, this activity is funded through a grant from the East Central Regional Arts Council through an appropriation from the Minnesota State Legislature with money from the State’s general fund.

The event was recognized at the Minnesota State Fair in 2011 as an award-winner in the “Community Pride Showcase”.   It was highlighted as a way the Greater Pine City area is moving beyond economic challenges with creative and proactive community and economic development innovations.