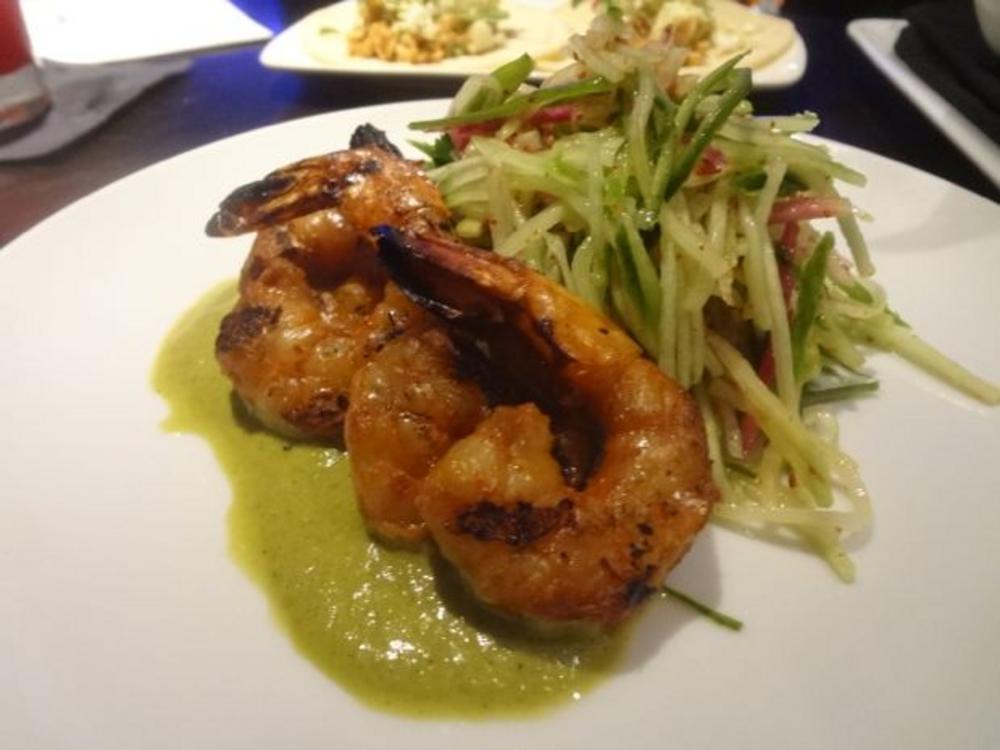 Maybe it’s because I have adopted a mostly plant-based diet.

But whatever the reason, I seem to have lost interest in the main course. Entrees bore me. I run out of appetite before I run out of meat, potatoes and veg, and I wind up taking half of it home in a box.

Or maybe it’s  simply because small plates offer more room for creativity, and are where local chefs are doing their most interesting work. A small plate doesn’t have to be a big piece of protein, accompanied by starch and veg — it can be just about anything.

This insight came to me over the past week or so, as I sampled small plates at Gather, Fika and King’s Wine Bar. (And previously, chef Hector Ruiz’s tapas at Rincon 38.)

When we arrived for the Thursday night happy hour at Gather, (5-7 p.m.) the restaurant and bar inside the Walker Art Center, every seat in the place was taken. But as we stood at the desk pondering whether to wait or leave, three guys got up from the bar. “How about those seats?,” we asked the host. “I’d better make sure they are leaving,” our host replied. “That’s Larry D’Amico and his friends.”

As in, the president of D’Amico + Partners. Probably the guy who has had the single biggest impact in shaping the Twin Cities dining scene over the last three decades. The guy who gave us the late, great D’Amico Cucina, and Campiello and Azur Cafe Lurcat and Masa, and whose culinary offspring include Tim McKee, Lenny Russo, Isaac Becker, Jim Grell and Doug Flicker — the list (as documented by Bill Ward in the Strib)  is nearly endless.

Gather — the full name is Gather by D’Amico — is an oddity: it’s open for lunch Tuesday through Sunday, but open for dinner only on Thursday evenings, when the Walker is open late, and offers free admission. What D’Amico has done with the Thursday night dinners at Gather is to turn it into a showcase for local chefs, many of them alums or current employees of D’Amico, featuring a different “chef-in-residence” each month, and a couple of their signature dishes. On the first Thursday, complimentary tastings of those featured dishes are offered.

This month, the chef in residence is Charlie Schwandt, chef de cuisine at Parma 8200 (a D’Amico restaurant in Bloomington), so at last Thursday’s visit we had a chance to sample small-plate versions of the two dishes of his that will be featured throughout the month: scallops with butternut squash, caponata and Parmesan ($12) and New York strip with marble potatoes, shaved asparagus and whipped quark ($22).

Gather’s happy hour is one of the Twin Cities best, and among its best-kept secrets: $5 glasses of wine, $3-5 beers, and your choice of any of the six small plates on the menu for $5 each (regularly $7-$13). Rather than choose between them, we ordered then all. I’m not sure I would order any of them again at the regular prices, but as happy hour specials they are a great value and a fun way to dine. I was least impressed with the grilled mahi-mahi tacos (regularly two for $10), which were prepared with a chipotle and ancho pepper rub, cabbage, cilantro and avocado, and the assorted cheese finger sandwiches ($10) weren’t very interesting, but I enjoyed everything else: the barbecue beef short rib banh mi sandwich (reg. $11.50), the chili rubbed shrimp ($13), the ricotta meatballs ($11.50) and the crisp and aromatic french fries with truffle oil ($7).

Every time I eat at Fika, the cafe inside the American Swedish Institute, I remind myself that I need to go there more often. This trip was no exception — I had one of the most enjoyable small plates I’ve had in recent memory. The cauliflower ($13) was prepared three ways — as a puree, roasted florets, and a fried cauliflower croquette, topped by a fried egg. The flavors, accented with anchovy, orange, tarragon and golden currants, were subtle but enticing. A selection of smörgåsar — Swedish open-faced sandwiches — is offered, with toppings including a pork terrine ($9), chicken liver mousse ($9), and a delectable seared salmon, with beet, tarragon and a sweet mustard, served on rye. Beet salads are everywhere these days, but Fika’s version is distinctive — a beautiful presentation of baby beets, nasturtiums, a corn custard and bacon (omitted at our request.)

At King’s Wine Bar, Chef Andrew Kraft recently introduced a new fall menu, and some of the most interesting small plates are in the shareables section, including the frito misto — deep-fried morsels of squid, shrimp  and veggies accompanied by a lemon aioli ($7) and curry Caesar, which offers an interesting twist on the ubiquitous romaine salad ($7). But my favorite was the flatbread of the day, an imaginative composition of cauliflower florets, ricotta, capers and dill pesto on a crisp crust ($7).