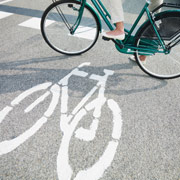 Five years ago, the Twin Cities area was one of four across the country to land a $25 million federal grant to encourage bicycling and walking for everyday transportation. This, of course, drives many conservatives nuts. Stop “wasting” money meant for roads and bridges on a supposedly tiny, probably un-American, minority of foot-powered travelers, they protest.

Best of all, this happened on the very cheap, $5 million a year in the Twin Cities, compared with the billions spent by all levels of Minnesota government every year on facilities for driving. Is that too much to spend on alternative transportation when barely 70 percent of work trips in the Twin Cities are in a private car? The rest is split among public transit, which usually involves some walking, (13.8 percent), walking (6.4 percent), bicycling (4.1 percent), working from home (4.7 percent) and the baffling “other means” (0.8 percent).

By the way, our metro’s transit, walking and bicycling market shares far outpace those of the other pilot grant recipients. Twin Citians increased their biking and walking by 7.3 million miles in 2010 alone, the report notes.

An overwhelming majority of the Twin Cities’ federal grant—88 percent—was spent on bike-walk infrastructure and bicycle parking, the rest on planning and outreach. For example, bicycle lanes and signage on Marshall Avenue in St. Paul led to a 42 percent increase in bicyclists on the Lake Street/Marshall bridge. The grant also attracted significant matching funds, including more than $1.5 million from private sources for the Nice Ride bike-sharing system that drew more than 100,000 riders in its first year of operation and another 217,000 in its second year.

The pilot program is now winding down, but local, state and federal officials are vowing to continue the progress for nonmotorized transportation. “Bicycling and walking are critical travel modes that will become even more importation in Minnesota’s transportation future,” said Tom Sorel, state transportation commissioner. “The outcomes of the federal pilot program in the Minneapolis area help to demonstrate the value of comprehensive, strategic investments for walking and bicycling.”