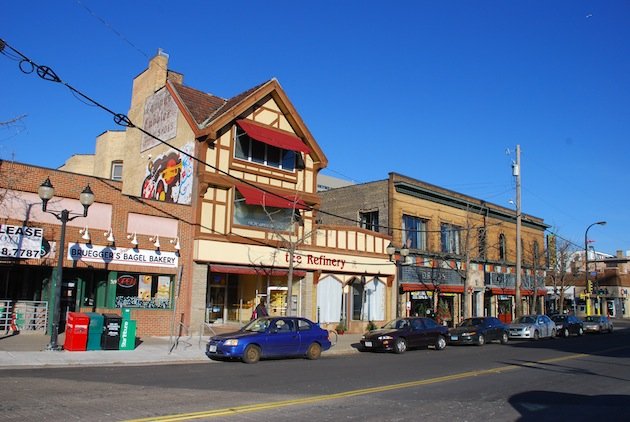 Quaint buildings that have been reused over the years have been subjects of historical preservation talks about Dinkytown. The Tudor Refinery Salon has a sign on the side revealing that it was once the Campus Cobbler shoe store. On the right, Loring Cafe occupies the building that was once Gray's Drug. (Photo by Bill Huntzicker)

The Dinkytown small-area plan is on the agenda of two groups this week, with presentations on different aspects of the plan to the Marcy-Holmes board of directors on December 10 and to the Dinkytown Business Association on December 12. The Dinkytown Business Association, the Marcy-Holmes Neighborhood Association and the Minneapolis City Planning Department are working on the small-area plan. They held public meetings in September and November at Varsity Theater to solicit public suggestions and reaction.

Developers and some other property owners in the Dinkytown area have organized to protest what they claim is neglect of their interests in the creation of this plan. Kelly Doran is now planning a hotel instead of an apartment building and the grocery store that the Marshall project developers promised the neighborhood may not materialize. For details on the development changes, see Dinkytown developers open Pandora’s box: Grocery, apartment building out; hotel and mystery tenant in.

Haila Maze, principal city planner assigned to Dinkytown, outlined the issues. Her presentations and a 104-page draft of the Dinkytown Area plan are posted online with separate analyses of historical preservation and the Dinkytown business climate.

Developer Kelly Doran objects to a “kind of undefined nostalgic view of Dinkytown” that, he said, is driving the small-area planning process “without recognition of the realities and the problems that Dinkytown is facing. Everyone had this view of what Dinkytown may have been and that’s not necessarily what it is.”

He said he’s working with property owners to write a response to the draft of the plan. “Most of property owners thought the presentation at Varsity Theater was biased; it provided a one-sided, anti-development view. It does not speak to property values,” Doran said.

Maze said eight of the 13 members of the working group from the first meeting were property owners. “Those eight of the 13 are very keen on property rights,” she said. “Two of them even sold their properties to Opus.”

Greg Pillsbury, vice president of the Dinkytown Business Association, owns Burrito Loco Bar & Grill at 418 13th Ave. S.E., in a partnership with his brother. “I know most of the property owners,” he said, “and I think they were represented. Everyone’s allowed to come; everyone’s allowed to give their input.”

“This is America so if they want to sell their property, no one can stop them,” said Pillsbury, who said Dinkytown’s strength is in its variety of small businesses.

“Dinkytown is a place where my brother and I can open a store 10 years ago and be successful,” Pillsbury said. “A friend can open a hair salon. Some gals had a belly-dancing store for a while.

“You’re going to see these opportunities go away if the rent goes up on everyone and the property taxes go up on people like me. Al’s Breakfast would not be able to open today if it had to go in there now.”

“Once the little guys make a place real cool, the big guys come and squeeze them out. I don’t want to see that happen in Dinkytown,” he said.

Joseph Amara, CEO and one of three owners of Magus Books, said the destruction of Dinkytown has already begun – the way small business districts have gone in Chicago and Milwaukee.

“If it weren’t for the Internet, we’d have been gone a long time ago,” Amara said. “We have materials on religions from Christianity to Zoroastrianism.”

His business attracts diverse customers from beyond the neighborhood with an unusual selection of books, ritual tools, incense, candles, a range of herbal products, and services such as classes, massage and consultation on herbal practices.

Pillsbury said he’s excited about the new apartments under construction in his Dinkytown block, but he said he favored Doran’s earlier proposed apartment building over the hotel. “I would prefer student housing; students would be there for a while, more of a captive audience. If he thinks it’s better to build a hotel, more power to him. If Kelly builds that, I think we can still keep the character of Dinkytown.” 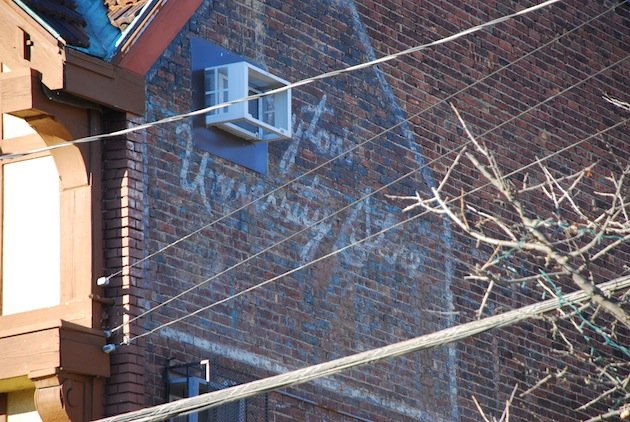 On one side of the Refinery Salon is a sign indicating that the building was once the Dayton’s University Store, the first Dayton’s store outside of downtown Minneapolis and St. Paul. (Photo by Bill Huntzicker)

Defining and keeping Dinkytown’s character is a challenge of the small-area plan, planner Maze said. The Minneapolis city plan identified several areas, including Dinkytown, to be studied in more detail to allow for planned development and preservation.

“It is an area that people care about,” Maze said. “I feel a lot of responsibility because of my commitment to give everybody a say.”

Meeting regularly with a work group and soliciting public feedback at the Varsity meetings, Maze has begun compiling the results that she will present to the Dinkytown Business Association at its monthly meeting at 2 p.m. Thursday, December 12, in Vescio’s Restaurant, 406 14th Ave. S.E.

The Dinkytown plan will be part of the Marcy-Holmes Neighborhood plan, which is also being revised. Maize will present the Dinkytown draft to the Marcy-Holmes board of directors at 6 p.m. Tuesday, December 10, at the University Lutheran Church of Hope, 601 13th Ave. S.E.

Throughout the process, Maze has proposed a number of options, including designation as a historic preservation district.

Her analysis says that Dinkytown has the association with historic events and important persons, distinctive design and physical characteristics, and potential to provide historical information necessary for National Register designation. Local advocates would have to create documentation to submit to state and federal preservation boards.

Public opposition to the creation of a local historic district, which could give the local historic preservation commission authority to review building changes, has been so strong that it won’t be in the plan, she said.

Skott Johnson, president of the Dinkytown Business Association, opposes the local historic designation, which, he says, puts too many restrictions on property owners.

Instead, Maze and Johnson have suggested National Register designation that would create a district that allows federal tax credits and grants to owners to rehab old properties. They have also recommended the Minnesota Main Street program, administered by the Preservation Alliance of Minnesota, which has helped small towns, including Stillwater, Winona and Red Wing, preserve their unique historic character while supporting revitalization and economic development.

“The Main Street is not a preservation tool as much as an organizing tool,” Maze said. “It can help a business association organize itself. It creates a voluntary toolbox so people can get together an create a larger network of support for the business community.”

The Dinkytown plan doesn’t create a historic preservation district. “The way it’s written, it says to ‘explore, look into’ the possibilities,” said Maze.

City Council Member Cam Gordon has proposed city conservation districts for areas, like Dinkytown and Prospect Park, that have cultural and historic significance not tied to specific buildings.

Maze said that the conservation district proposal has gone through many drafts and has not yet been approved by the City Council. “It would be nice to have it and be able to lay it side by side with historic designation and look at the pros and cons of each,” she said.