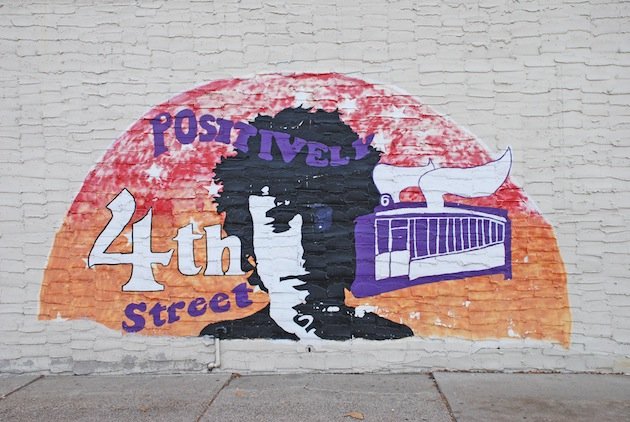 Skott Johnson lived in the Sigma Nu fraternity house as a University of Minnesota journalism student in the 1970s when he began working for Nelson’s Office Supply on Fourth Street Southeast where the Pagoda restaurant stands today.

Johnson, a native of Austin, Minn., found that he liked the big city of Minneapolis and the small-town feel of Dinkytown so much that he stayed after graduation.

As Nelson’s closed its Dinkytown store, Johnson, then manager of Nelson’s photocopy and printing department, created his own printing and copying business called Autographics in 1989.

Thirty-six years after graduation, 24 years after creating Autographics, and 18 years off and on as president of the Dinkytown Business Association, Johnson will close his shop at the end of this month and return to Austin to care for his ailing mother.

His departure could vacate a significant corner in Dinkytown, a four-block business district adjacent to the University of Minnesota in Southeast Minneapolis. His building houses several other businesses and sports an iconic collage, invoking memories of streetcars and Bob Dylan.

And Johnson, 59, will leave a bigger gap in the Dinkytown Business Association, which has become strongly identified with him after his many years as DBA president.

“It’s really evolved over the years,” Johnson said. “It began as one meeting a month, but evolved into kind of an ambassadorship” in which he attends many meetings to represent Dinkytown businesses. A successor – or perhaps several to head various committees as well – will be elected by the end of December when he leaves, Johnson said.

Johnson was the personification of the DBA because, he said, he could be flexible enough to attend day and night meetings. He didn’t have family in Minneapolis and his business was small and flexible enough for him to close during the day for an hour to attend meetings.

Others say his influence came from his quiet, conciliatory manner and ability to build bridges and get things done.

Opus, the developer of a new six-story mixed-use apartment building on Fifth Street between 13th and 14th avenues, recently closed parking on an entire block for a day on 13th Avenue, removing access and parking for Burrito Loco and Quang Minh restaurants. When the meters were hooded a second time, the hoods were removed within a day after Johnson and other business owners complained to the city’s public works department. Johnson said he didn’t know whether their calls made a difference, but other business people in Dinkytown applaud Johnson for protecting their interests in situations like this.

Georgia Sander, owner of Kafé 421, said she didn’t want to be interviewed about Johnson’s departure because she might cry. “He has been so helpful, so supportive of Dinkytown and individual businesses and people,” Sander said. “He is friendly and he’s calm; he never raises his voice.”

Autographics opened first at 1306 Fourth St. S.E., a small space next to the Varsity Theater. Johnson moved a few times before landing in his current corner at 1300 Fourth St. S.E.

“I like the corner,” Johnson said. “I love the windows. I can see the world out there. I get a lot of work done in the morning. Then at 11 o’clock, it gets busy and I can look out – I see a dozen cars a day going the wrong way on Fourth Street,” which is a one-way street. He saw only one bad accident when the street was temporarily made a two-way street during nearby bridge construction.

His greatest achievement as DBA president? “I guess it would be keeping the Dinkytown area involved with the other entities: neighborhood groups, the stadium advisory committee, University District Alliance, University and district parking committee, and the city council member.”

One such neighborhood is Marcy-Holmes, which includes Dinkytown. “I’m very sad [to see Johnson leave] because he’s been a very active spokesman for the community,” said Melissa Bean, director of the Marcy-Holmes Neighborhood Association. “He’s a warm, friendly person. Maybe when he leaves this business stuff behind, he can do more painting,” said Bean, an artist herself.

Johnson said he does plan to paint and write, but his main attention will go to his mother, a widower. His father died about three years ago, a sister lives in California and his 90-year-old mother lives alone, except on weekends when he returns to cook and care for her. An adopted child, he met his birth brother, who lives in Texas, about 15 years ago.

Everyone interviewed said Johnson knows everyone in Dinkytown, partly because he makes rounds visiting the businesses. “I’ll miss the food – I try and hit all of the restaurants,” Johnson said, adding that he usually visits with the owners. “I don’t like to eat alone.”

For the past year, Johnson has worked on Dinkytown’s small-area plan, a supplement to the city plan in which the area tries to control growth and change, even while the place has experienced the largest growth in its history.

DBA, which will be 50 years old next year, has expanded to allow membership by new businesses across the street – Sydney Hall in the block at the corner of Fourth Street and 15th Avenue and the Marshall across Fifth Street in the block between 14th and 13th avenues.

One of those owners, Kelly Doran, who owns Sydney Hall and plans to build a six-story hotel across Fourth Street from the Varsity Theater, has objected to what he calls the DBA’s power and neglect of property owners.

Tim Harmsen, who lives in Circle Pines, described the DBA and Marcy-Holmes residents as interlopers who have no business making plans for the 85 percent of the land east of I-35W which, he says, he and other developers own. He said the interstate highway has created two neighborhoods and the landlords and their tenants should control the area east of the highway.

Harmsen, Doran and eight other Dinkytown property owners submitted a letter requesting a meeting with the DBA and city planner Haila Maze to discuss the plan. Harmsen and a Doran representative were at the DBA meeting December 12, when they presented the letter that also opposed historic preservation.

“I’m on the board of a fraternity – I did get to see the expenses remodeling of 80-year-old building, so much of it had to be processed through historic preservation. Some things went smoothly and others held surprises,” said Johnson, who has opposed local historic designation ever since.

Alternative strategies for defining and preserving an area’s character are the National Historic Preservation designation and the Main Street USA program designed to help small towns to revitalize historic areas and conservation districts – a concept being developed by the City Council based on the work in other cities, like the neighborhood around Harvard University in Cambridge, Mass.

“Most property owners here have been excellent owners for their tenants,” Johnson said. The current excitement is more about developers than property owners, but owners have been more involved at certain times. “If you can get property owners all excited about land value and historic design, then you get the owners to talk about property values going down or higher taxes. It did get a number of them excited.”

The building that houses Autographics is an example of Dinkytown’s history. “The building I’m in looks like one building, but it’s three houses put together. They were here a long time before retail was put in,” Johnson said.

Such buildings could qualify for historic preservation if they contribute to the neighborhood’s character or history. This building is an example of many Dinkytown businesses that operated in homes converted to commercial use. Others included the original House of Hanson, the original Podium music store, the iconic Scholar Coffee House, and several beauty salons – all of which have been demolished.

The owner, Brett Naylor, who also owns Dinkytown’s first six-story mixed-use development that houses the Purple Onion coffee shop at 1301 University Ave. S.E., could not be reached to discuss his plans for the Autographics corner of his building.

For more than 15 years, Johnson often watched and visited with people from the wooden bench in front of Autographics. “I think the bench has seen its final year,” Johnson said. “That thing is being held together by so many screws.”

At the last public meeting of the planning group in November, City Council Member Diane Hofstede presented Johnson with a proclamation, declaring that “although he has made millions of copies Skott Johnson is an original; and his leadership cannot be duplicated, he is an honest, straightforward and exceptional business person who has shared his time, his compassion, and his life with us.”

Students who worked at Autographics painted this mural recalling Dinkytown’s association with streetcars and Bob Dylan.

The rear of the building that houses Autographics hints at its former incarnation as three separate Victorian homes.

Skott Johnson in front of his business that will close after nearly a quarter of a century.

The worn-out bench on which Skott Johnson often visited with customers and neighbors.