Winter in Minnesota does not favor plein air sketching – ink freezes in pens, watercolors turn to ice and fingers develop frostbite. Fortunately, there are many good places to sketch indoors in the Twin Cities (watch this KARE 11 report about the Metro Sketchers sketching at the Como Conservatory). Towards the end of the season, I get bored of sketching indoors and venture outdoors into the cold. I put on my fingerless gloves and dilute the ink in my fountain pens with alcohol and step outside to sketch the predominant feature of late winter in Minnesota: snow piles. Snow piles are a ubiquitous, though fleeting part of the urban, winter, Twin Cities landscape and every year, a few of us urban sketchers take up the challenge to celebrate and immortalize snow piles on paper before they melt away.

Snow piles come in many forms in the Twin Cities. There are the filthy windrows of snow that line streets and sidewalks. Enormous piles of dirty snow loom over cars in parking lots. Piles of snow buttress parking ramps. Snow is removed by trucks from downtown Minneapolis and piled up on the edge of the city in gargantuan peaks that resemble a range of mountains that approximate (if you squint real hard) the majesty of the Himalayas and the Alps.

By the end of winter, the piles of snow are sculpted into fantastic shapes by the elements – this comic strip I drew in 2001 (at top) explains the process (click here to make it bigger).

Last week, I sketched a big, dirty snow pile in the middle of the Midway Center parking lot on University Avenue in Saint Paul: 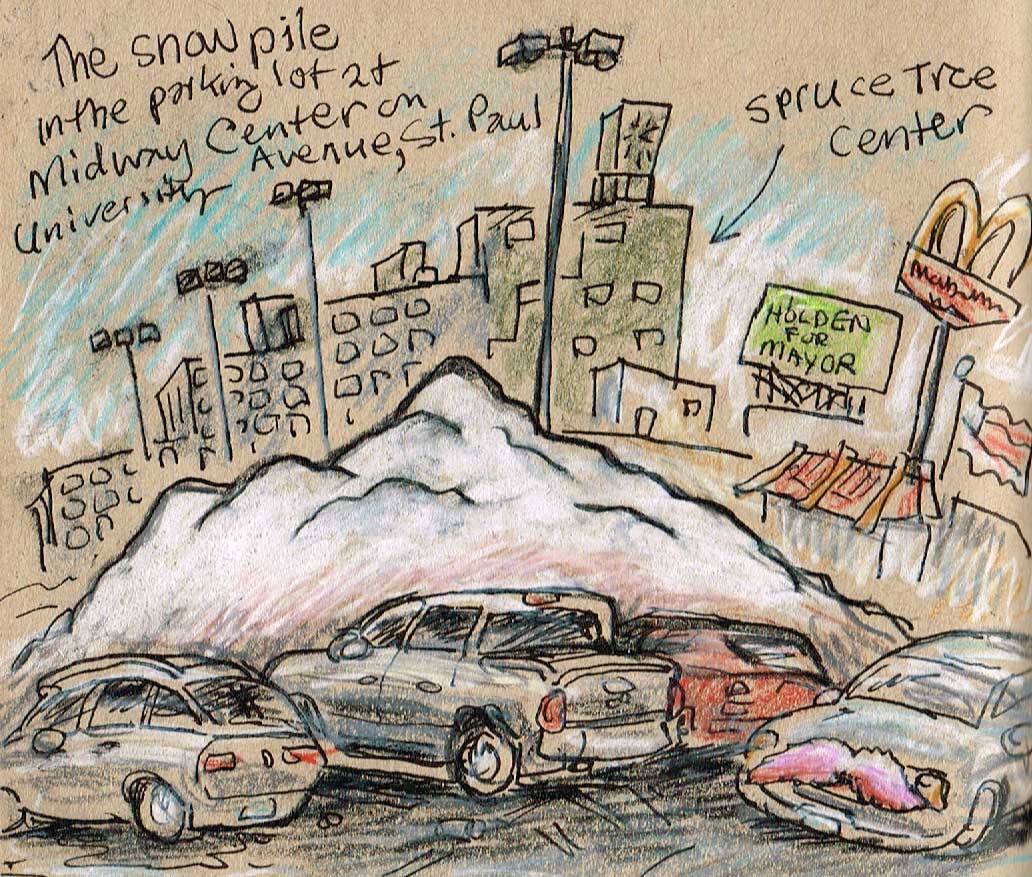 Among my snow pile sketches from previous years is this sketch of a melting pile of grubby snow and ice in the Kmart parking lot in Minneapolis: 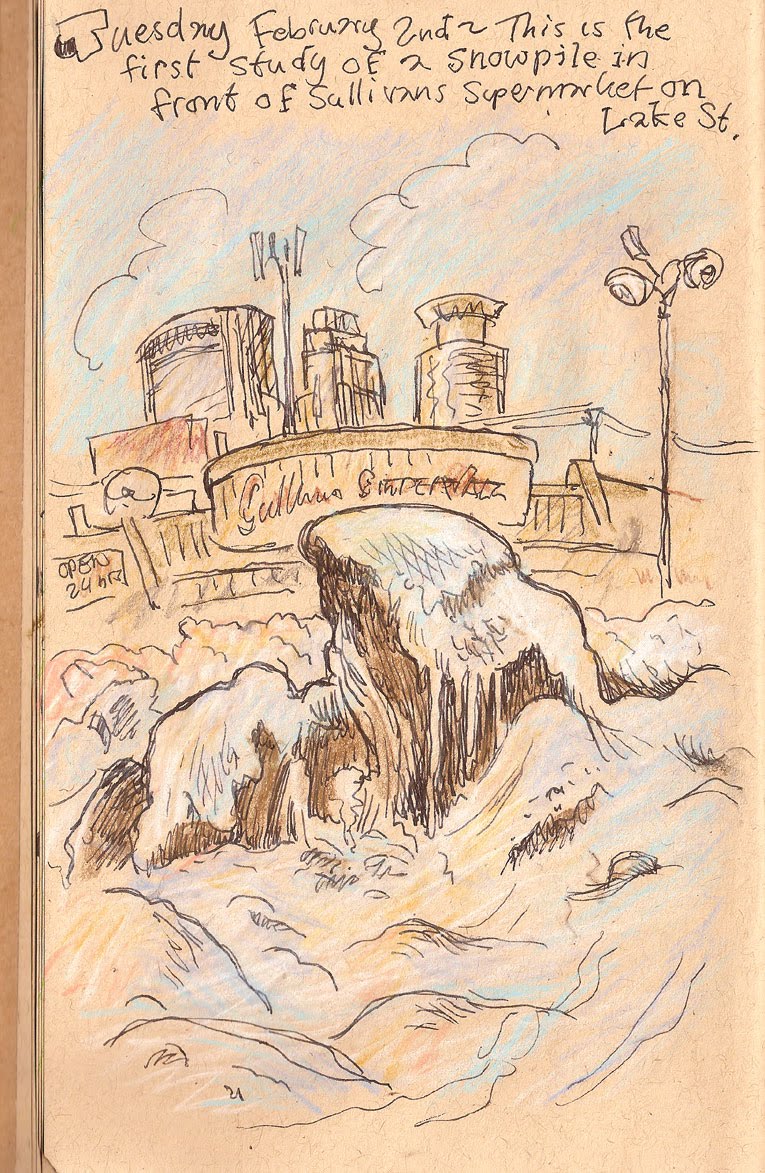 In 2010, I learned of a humongous snow pile in a secret location and braved temperatures in the low single digits to sketch it: 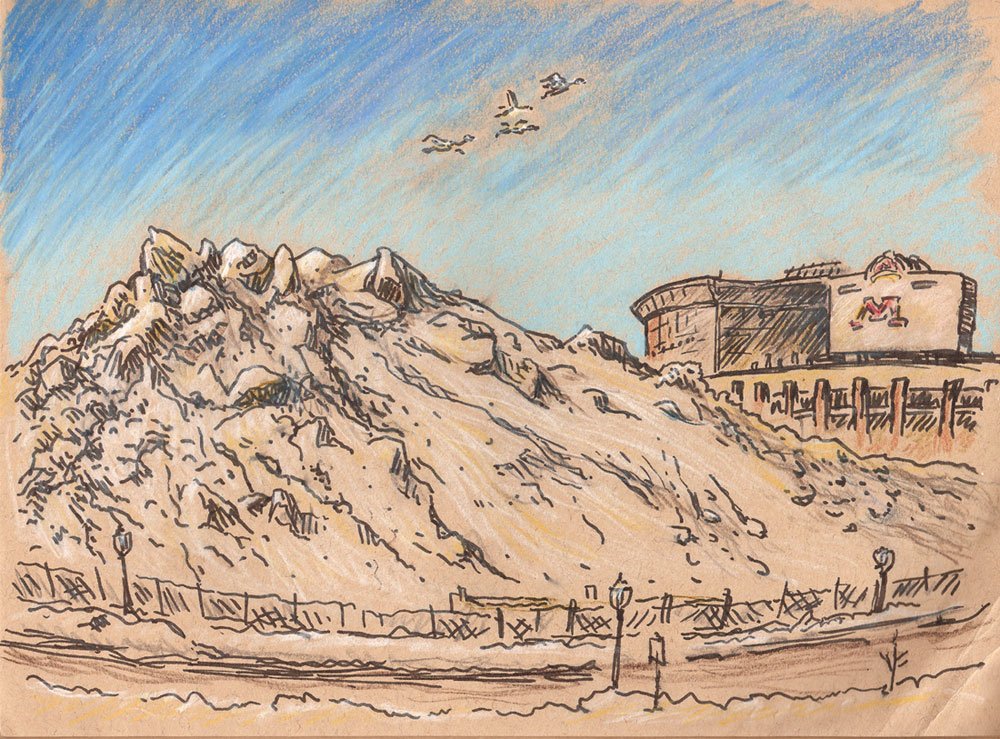 The following annotated sketches detail the glacial proportions of snow and ice that built up on city streets during the winter of 2010-2011: 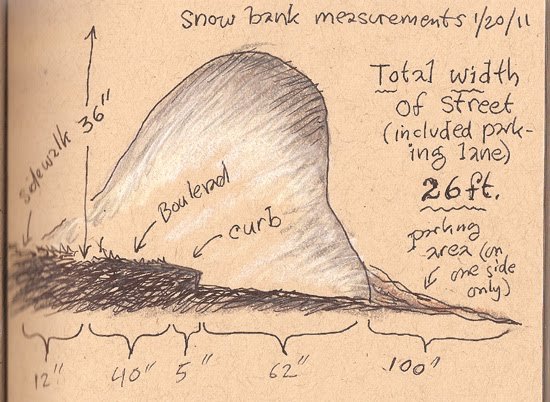 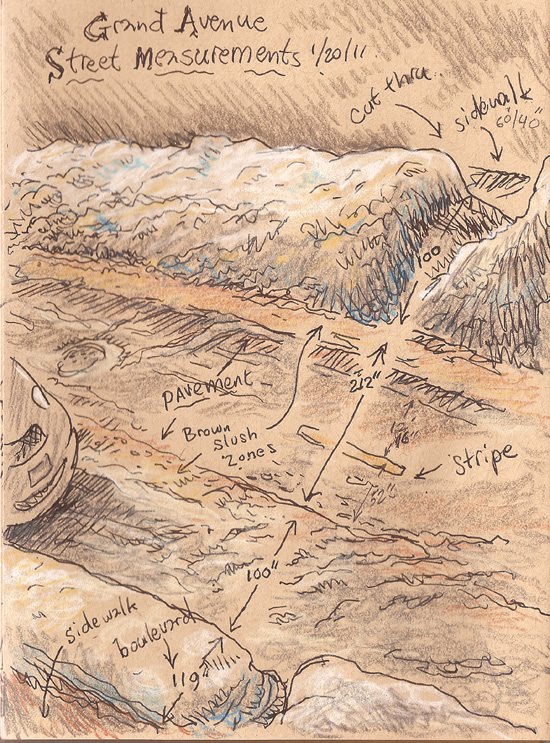 I made the following sketches from inside a coffee shop showing a bicycle trapped in the icy grip of snow pile: 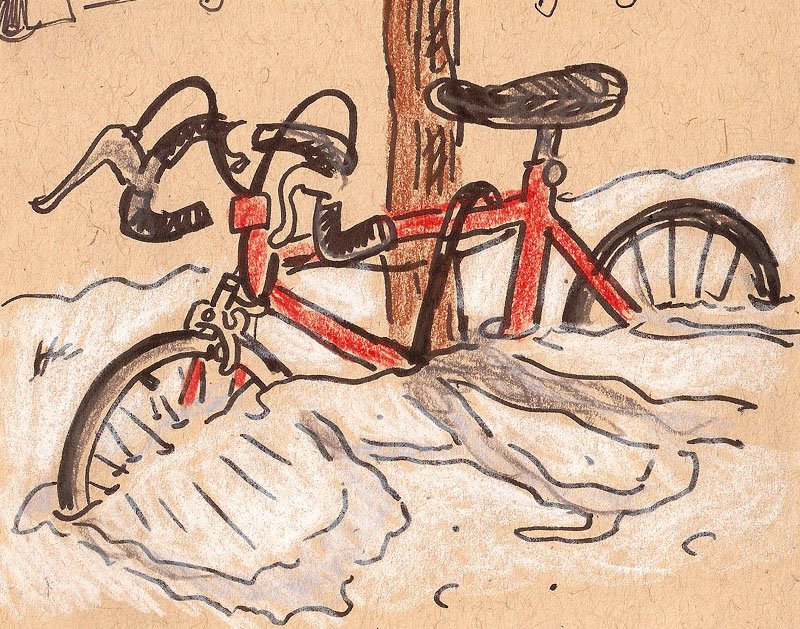 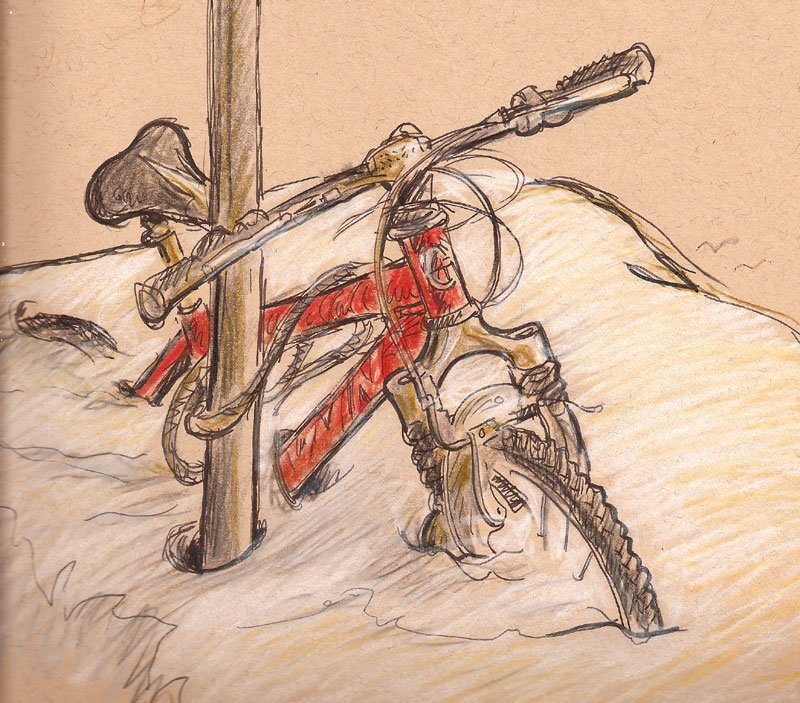 Last year, I sketched a rack of Nice Ride bikes, normally a harbinger of springtime suffering the indignity of being engulfed by an avalanche from a nearby parking ramp: 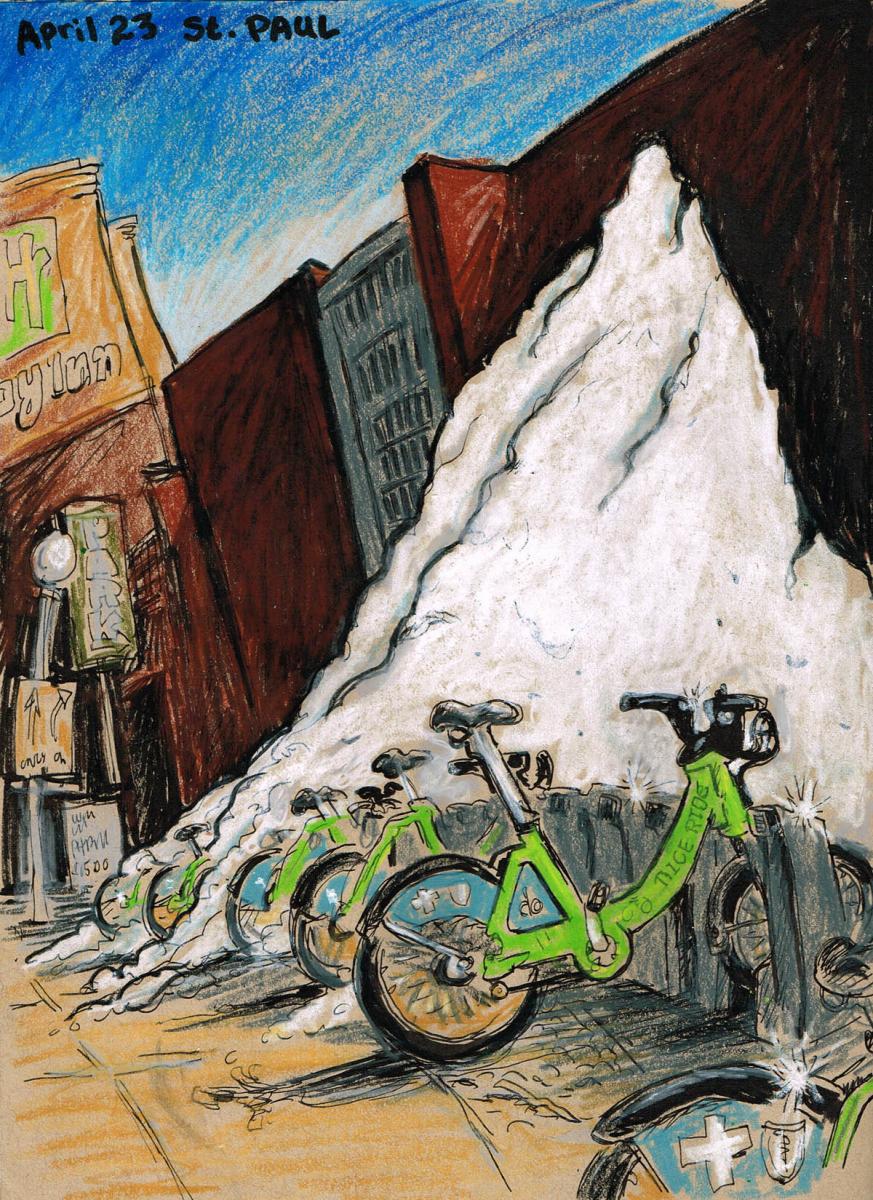 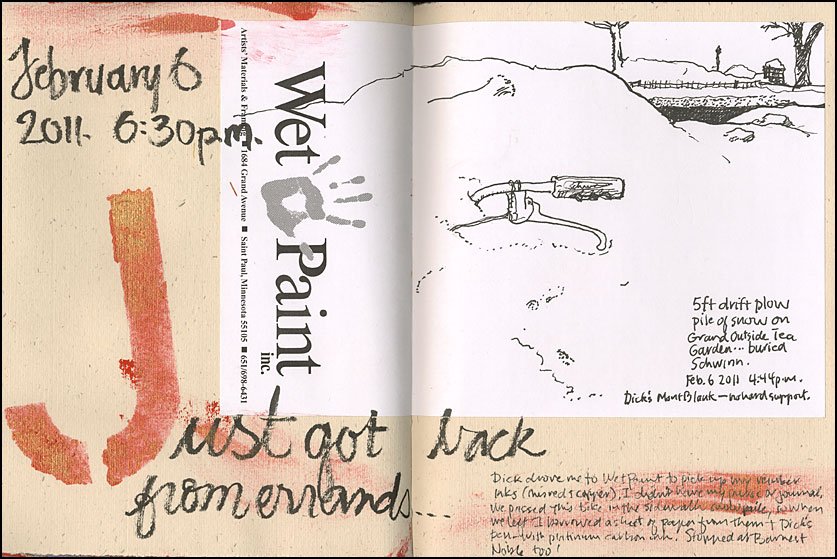 Roz also gave me permission to share some of her great sketches of snow piles – this is a nice sketch of Mount Sears in Saint Paul: 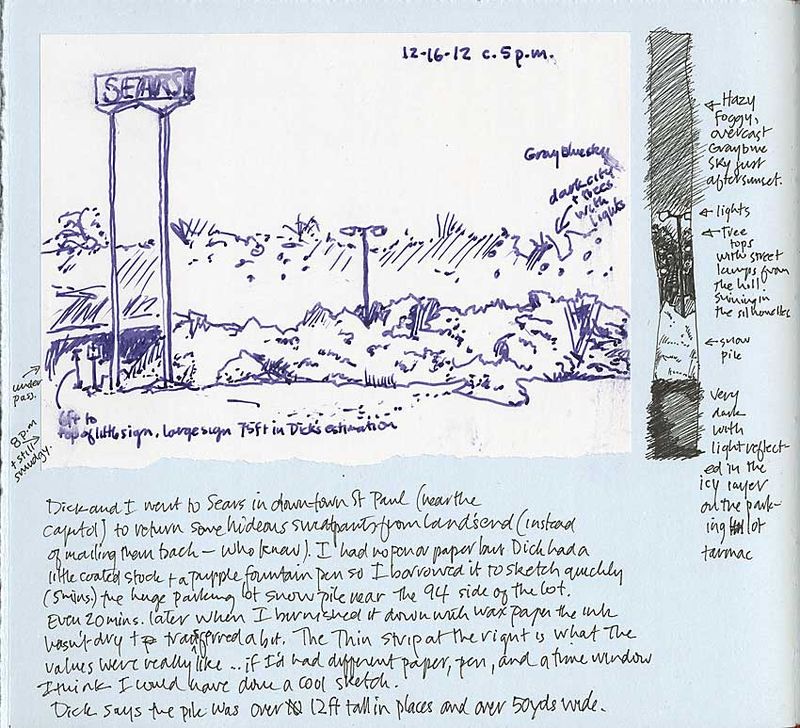 These last two sketches by Roz are really nice: 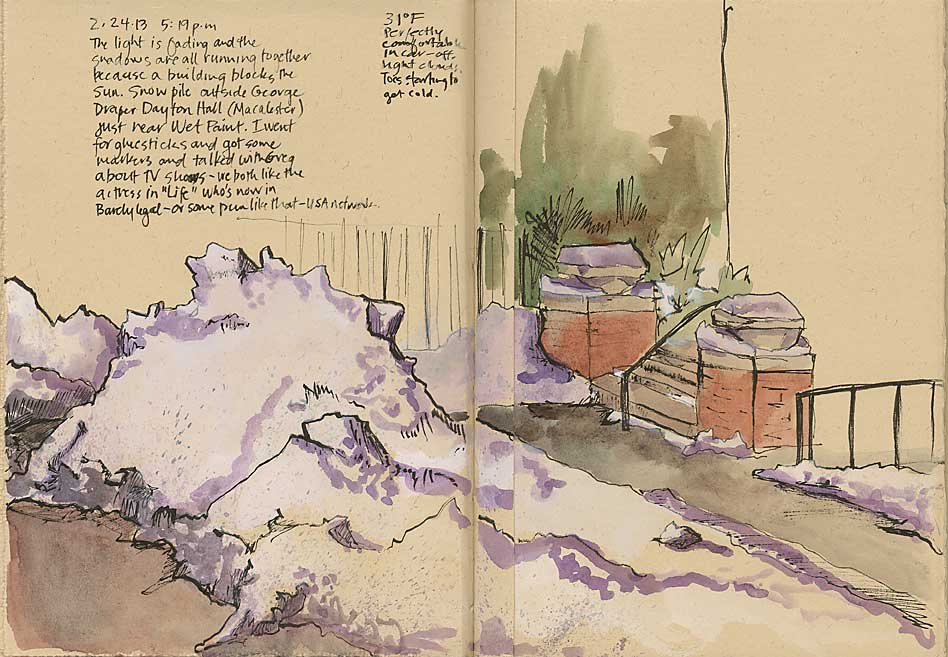 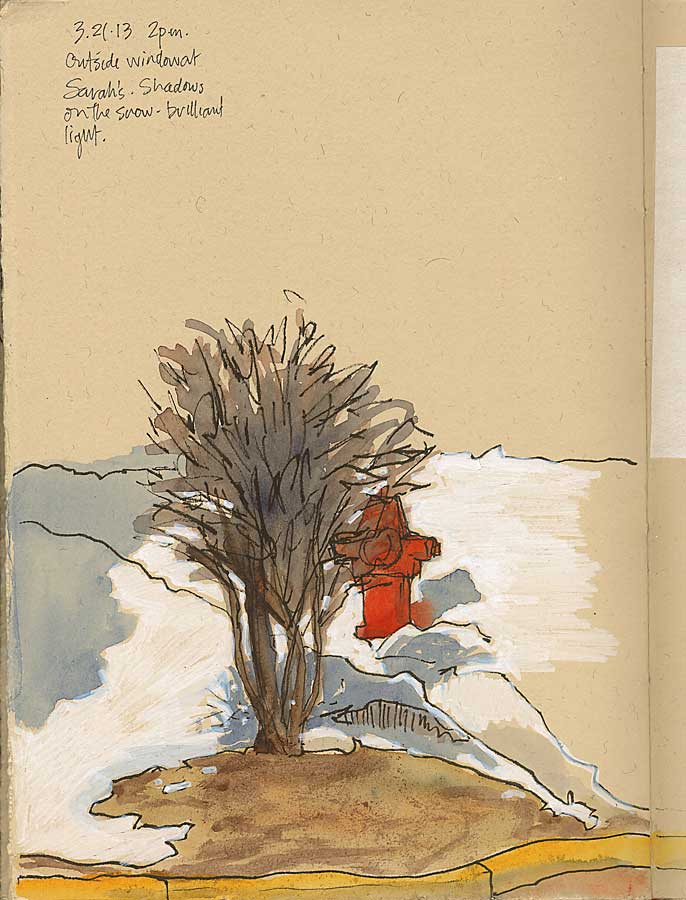 Winter isn’t over yet, so get out there and sketch some snow piles!