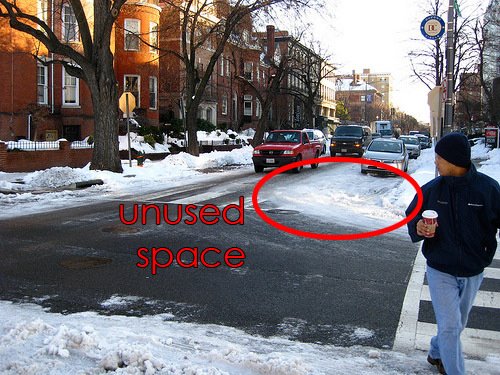 There was a recent trend on the East Coast where it snowed like once or twice and neologistically inclined urban designers got excited about the tracks that cars made. Yes, I’m talking about “sneckdowns.” Wikipedia defines it thus:

A sneckdown,[1] or snowy neckdown[2] is a curb extension caused by snowfall. A natural form of traffic calming, sneckdowns show where a street can potentially be narrowed to slow motor vehicle speeds and shorten pedestrian crossing distances.

Earlier this winter, a reporter from a local TV station called me about the “sneckdown” concept and ask 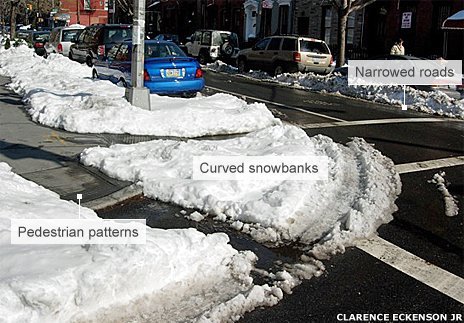 ed me whether it applied to Minnesota. I didn’t know what to tell him. It seems to me that great sneckdown examples in the classic sense (curb radii and bumpout potential) are a bit rare around Minneapolis and Saint Paul. Believe it or not, we do a much better job of plowing our streets, and they’re designed around snow removal more than those of lesser winterized cities. The story didn’t go anywhere.

That said, I do think there are a few key “sneckdown”-type lessons you can draw from Minnesota winters. Even without generating any media-grabbing snow-tastic neologisms, winter can teach us a few things. 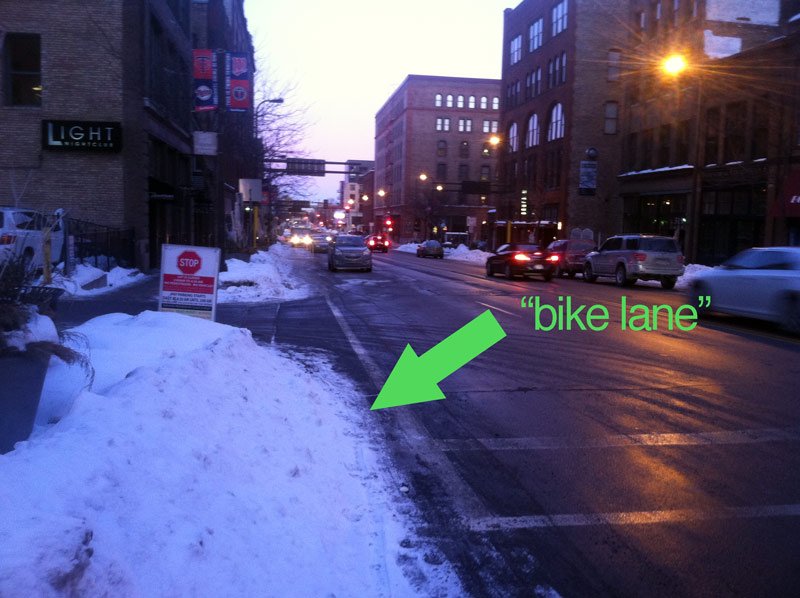 Everyone who rides a bike in the winter already knows this, but it’s worth telling the world anyway. In the winter, bike lanes become a convenient place to store ice and snow or your parked car. They disappear underneath a bumper or become coated with all possible forms of ice.

The main reason that bike lanes are almost impossible to plow is because turning and parked cars drive over them, and pack any snow into ice before plows can scrape it away. As we build more cycle tracks, I’m hopeful that the combination of more flexible plowing technology and a lack of cars driving on the bike lane will make them easier to clear. But for many months of the year, bike lanes are not much more than lines on maps. 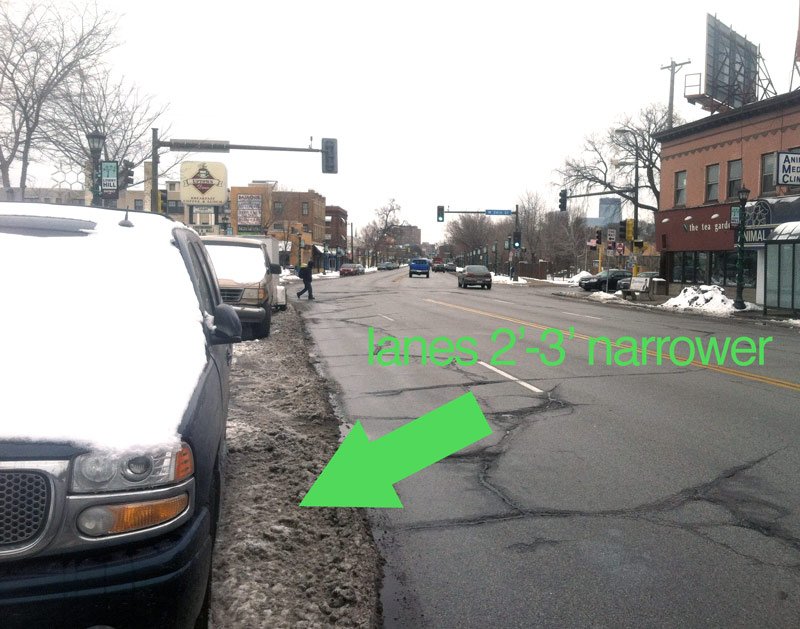 By the end of winter, almost all our city roads are between 2′ and 5′ narrower than they are in the summer. In a world where people have knock-down drag-out community brawls over a few feet of roadway, that’s a lot of space. Next time an engineer points to state standards and says “we need wider lanes”, ask them about wintertime.

Drivers adapt to narrower road widths in a variety of ways. [For example, see below.]

I don’t have data on this, but as the winter narrows our roads, we drive slower. People still get where they’re going. The world does not end. Businesses still have people in them.

Walking on streets feel a bit safer, at least for the speed and threat of car traffic. For a pedestrian or cyclists, though, this extra safety from slower cars is offset by the ice and Alpine mountains of crusted grey snow at many crosswalks. 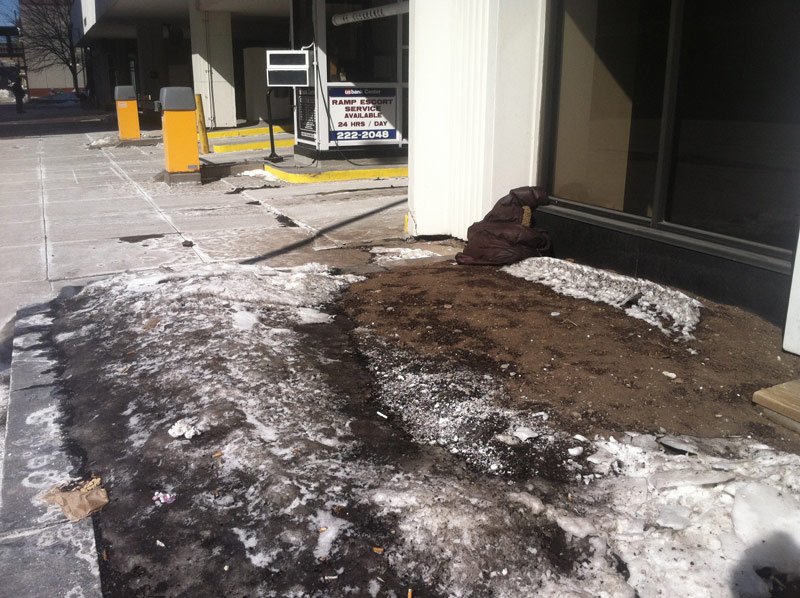 This doesn’t illustrate anything. It’s just a really ugly sidewalk.

As the roads narrow and every parked car inches a few feet out into the outside lane, 4-lane roads turn into 2+ lane roads where the outside lane is treated as a passing or “advisory” lane. Cars rarely pass each other at speed, but instead treat the road space somewhat like a 3-lane road. 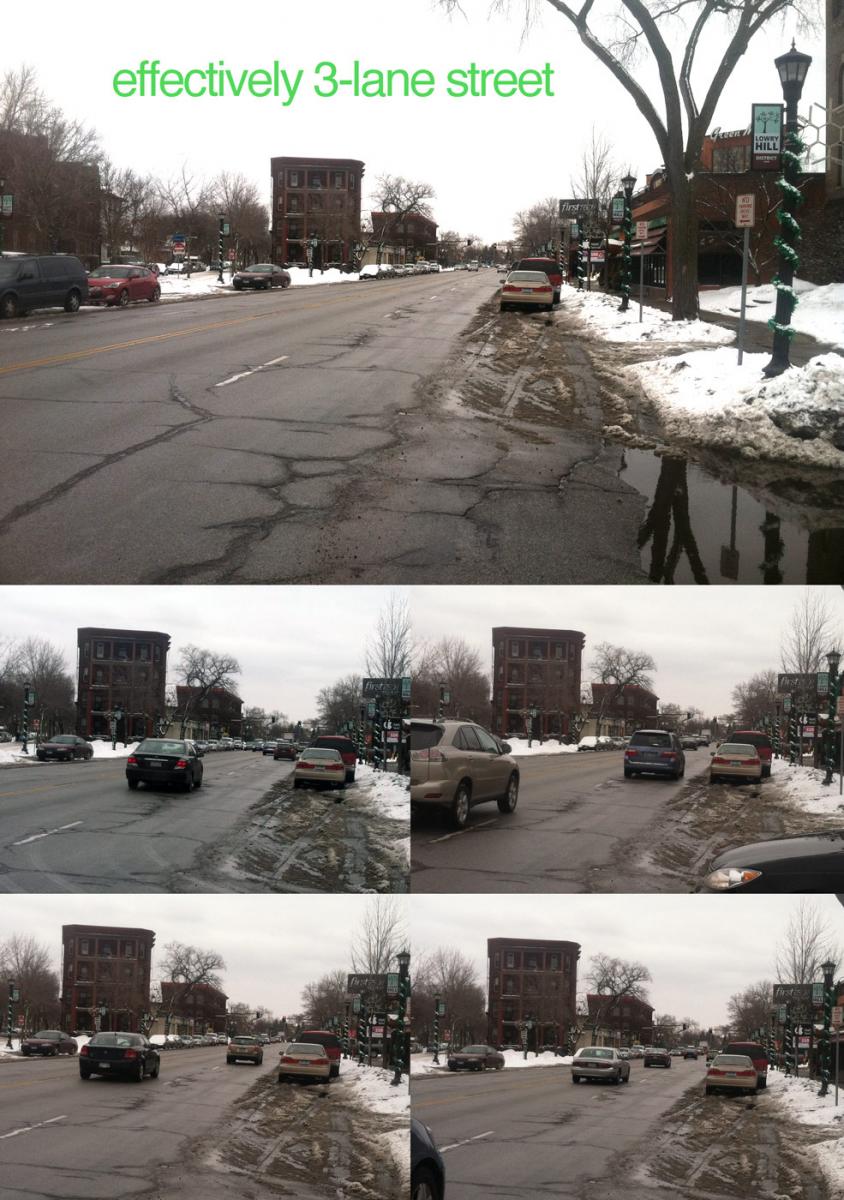 This is true on most streets in the city, including the busiest ones like Hennepin, Lyndale, University, and West 7th. (These are the examples I’ve observed.) The problem is that there is no middle turn lane, and often these kinds of ex facto winter road diets can seem dangerous or disorganized. If our traffic engineers pulled the trigger and designed 4-3 conversions on these streets, they’d be a lot safer. Winter proves it can work.

Lesson #5: Parking is More Flexible than you Think 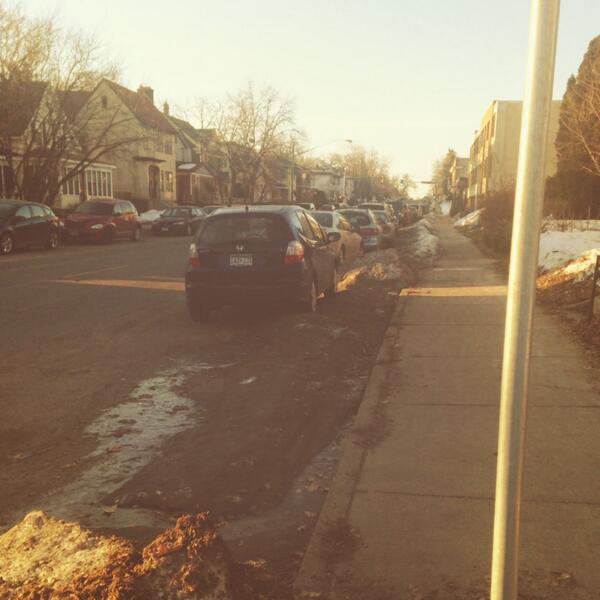 Often when planning a bike lane, development, or sidewalk, everyone gets worked up about on-street parking. “We can’t live without that block or parking!” “I need that space to survive.” [Insert your own parking barking here.]

Well, what it I told you that arbitrarily, in the middle of the night, both cities removed half their on-street parking all at once. It’s true. The city still functions. People walk a bit more. It’s not the end of the world.

Potholes are inverse speed bumps. They’re crazy this time of year, but after you hit a doozy, you drive slower.

Given the amount of streets that look like moonscapes, the fact that transportation policy leaders still talk about “capacity expansion” seems ludicrous. Shouldn’t we make sure our existing roads are well maintained before we start building new ones into distant farm fields?

That is all. Hopefully winter will be gone soon and we can forget this ever happened. 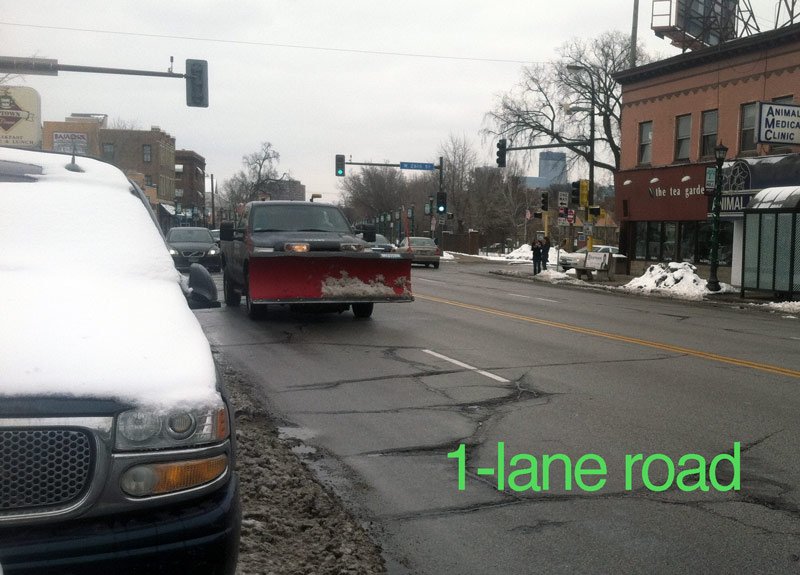 Nobody is gonna pass that guy.