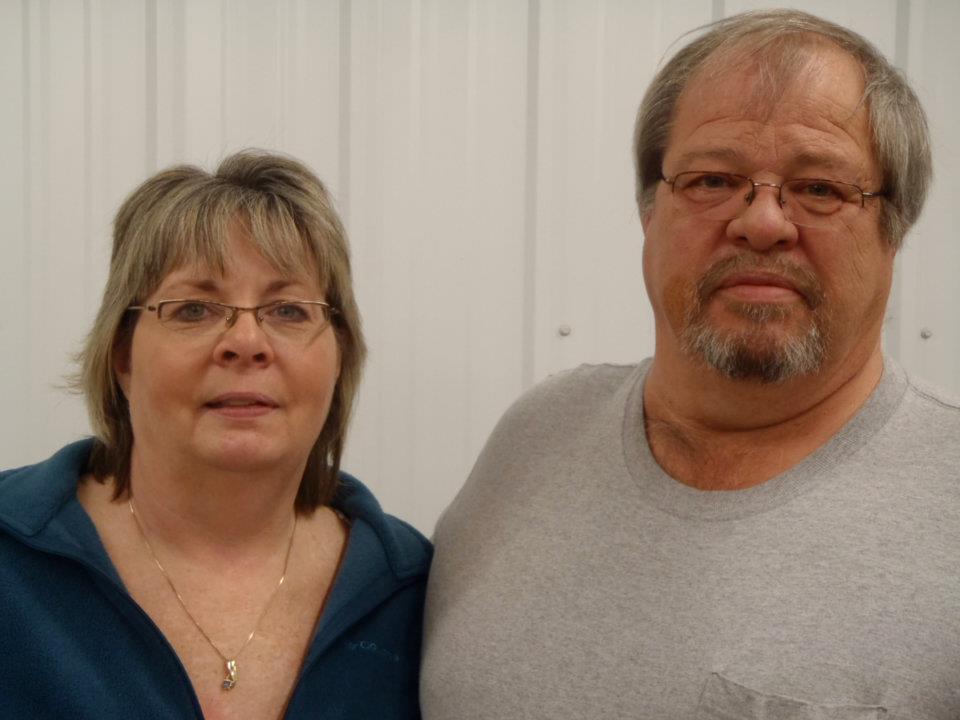 The Fredericksons of Drayton, North Dakota are among many households where both working spouses now are locked-out by American Crystal Sugar. Renae Frederickson (left), is a maintenance planner with 32 years at the company. Lynn Frederickson (right) is a crane operator with 40 years at the company. Their garage is serving as a food shelf for locked-out workers and as a meeting place. Renae relates how the company every year has sponsored a "communications meeting" between the BCTGM workers and the farmers who are the members of the ACS cooperative. She asks, "how was it all these other years they said they couldn't do it without us and this year they kicked our asses to the curb?" (For more photos and stories, go to Minneapolis Regional Labor Federation album,  Red River Valley visit with locked-out sugar workers, 1/31/2012

Union members reported for work February 1 at American Crystal Sugar’s East Grand Forks factory. Instead of going inside to their jobs, however, they remained outside the gates of the factory where they were locked-out from their jobs six months ago to the day — and instead hollered at scabs going inside the plant.

The action today was one of four similar actions at American Crystal Sugar factory gates the past two days in Hillsboro and Drayton, North Dakota, and Moorhead, Minnesota. “We’re just here today to show the company and the farmers and the community that were ready to go back to work,” said Scott Riplinger, who co-chairs the solidarity committee at the East Grand Forks plant for the Bakery, Confectionary, Tobacoo and Grain Millers Local 167G Unit 264. Riplinger, who lives in Manvel, North Dakota, is , a 28-year company employee and ion technician.

In East Grand Forks, about 30 union workers stood with signs outside the plant gates as scab workers drove cars inside. “Go back scabs, go back!” they shouted.

The action came two days after the latest federal mediation session between the company and BCTGM ended with the company continuing to insist on a July 28 contract offer which union members voted down by a 90 percent margin.

“It’s hard to negotiate when only one side is negotiating,” said Ken Lamberson, assistant head steward and co-chair of the solidarity committee. Lamberson, who lives in Grand Forks, North Dakota, is a boiler house foreman and has worked 16 years at the company.

“We truly believe it’s not about money; they’re out to break the union,” said Sonny Collison, vice president of the East Grand Forks BCTGM local. “It’s hard to accept it,” he said. “You thought you were part of the factory.”

Almost every car and truck driving by on U.S. 2 past the factory honked in support of the locked-out workers. “We’ve got a lot of community support,” Collison said. Workers outside the East Grand Forks plant expressed a profound sense of betrayal by American Crystal Sugar.

Six months before the lock-out, Lamberson said, the company asked him and his family members who work at American Crystal Sugar to appear in a company video, “The Chosen Field.” “The company came to us and asked us to do this video and talk about family, tradition, and moving up the ranks,” he said. And six months later they all were locked-out.

One of the married couples who both work at American Crystal Sugar’s East Grand Forks factory are Bonnie and Jay Holter, Arvilla, North Dakota. Bonnie and Jay even met at work. Bonnie, an ion helper, has worked 28 years at the plant. Jay, an ion technician, has worked 29 years at the plant. They raised their family of six now grown children on union wages from American Crystal Sugar. “We’ve given the best we’ve got to this company and this is how we are treated,” Jay Holter said. “It’s probably only a year and a half ago the company gave us shirts that said, ‘You’re the best at what you do.’”

The workers outside the plant lined up and marched as far as possible toward the security guards at the factory gates. They chanted: “What do we want? A fair contract! When do we want it? Now!” Another chant: “What does Crystal Sugar have to hide? Dirty sugar made inside.” Another chant: “Come on Crystal, play it straight. Sit down and negotiate.” Another chant: “David Berg, rich and rude. We don’t like your attitude.” (Berg is the Crystal Sugar CEO who a few weeks ago compared the union to a “cancerous tumor.”)

“This is just beyond believable,” said Jan Bailey, Grand Forks, an ion tech who has worked 12 years at the company. “I can’t understand why Crystal is doing what they’re doing. They’re saying one thing and doing another. Their actions are speaking for themselves.”

“I’m grateful my husband doesn’t work here,” she said. But, she added, “even though my husband is employed, it’s not enough. We’ve almost lost our house.”

Bailey said she and her husband, long-time renters, purchased their first home in 2004. “We had a chance to buy a house,” she said. “Nobody saw this coming. Why would you?” Now, she fears, their house will be going into foreclosure. The couple also are no longer able to help out their children and grandchildren financially. “We’re just barely taking care of ourselves,” she said.

Despite the grim challenges locked-out workers face, they retain a sense of humor. As the rally wound down and workers began to move away from the plant gates, one man quipped, “on behalf of the band and myself, I hope we passed the audition.” (A quote from John Lennon and a Beatles’ recording.)

Back at the BCTGM office in Grand Forks, Debra Kostrzewski, Argyle, is working to coordinate another round of food drives to support locked-out workers. She has worked 23 years at the company and is a quality lab foreman at the East Grand Forks plant. “Right now, we’re trying to get by,” she said. “I personally feel betrayed because I enjoy my job there and I want to go back even after all this,” she said, “once this lock-out is over and the union is back in — and we will be back in.”

“People are fighting. They’re going to stay strong. They’re going to continue the fight,” said John Riskey, president of BCTGM Local 167G. Riskey, who lives in Minto, North Dakota, began working at American Crystal Sugar in 1979. Riskey emphasized that the union’s negotiating team, led by a representative from the international union, includes all members who have been elected by the members of the seven American Crystal Sugar plants.

And rank and file members have emphasized that they are the ones reading the contract offers, analyzing them, and voting them down.

“Right now,” Riskey said, “it looks like it’s going to be a lot longer fight than we were hoping.” He thanked all the unions in the region and across the nation who have been sending support to the locked-out BCTGM workers.

“If they can help us again, we would appreciate it,” Riskey said. A recent New York Times story, Riskey noted, has raised the national profile of the lock-out at Crystal Sugar and also lock-outs at other companies across the United States, leading to hundreds of stories in other news outlets. “We need as unions to fight together to put a stop to this —stand strong,” Riskey urged.