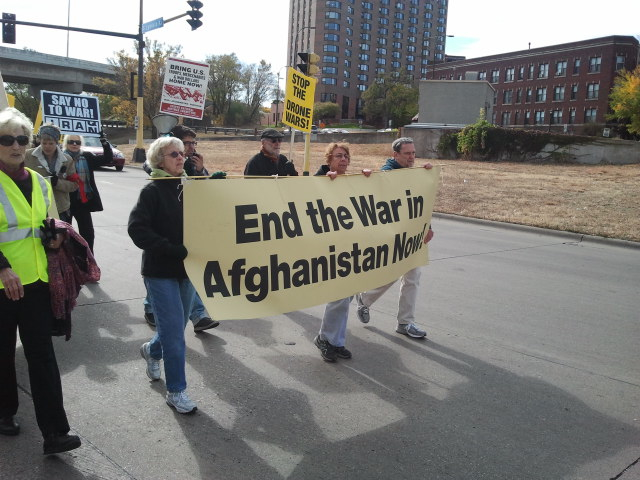 Mai Overly stood tall before scores of anti-war protesters, who assembled Sunday afternoon in the Uptown area of Minneapolis, as she spoke of the direct effect the 11-year-old war in Afghanistan has had on her.

“My brother is one of the young Marines that are currently in Afghanistan,” Overly told the crowd. “To end this war is personal for me.”

Like the rest of the picketers standing along the sidewalks of Hennepin and Lagoon avenues, Overly denounced the wars America is fighting in Afghanistan and Iraq. She also opposed the use of U.S. drones in many countries, including Pakistan and Somalia.

An organizer of Students for a Democratic Society at the University of Minnesota, Overly expressed concerns about the fact that the United States has been engaged in a protracted war over the past two decades.

“Many military men and women of today barely even remember a time when the U.S. was not in the war and continual occupation of the Afghani lands,” she said. “My brother was 10 when this war started.”

At the anti-war protest, some young supporters of the group told the TC Daily Planet that they’re against what they called, “the U.S. occupations” of Iraq and Afghanistan.

Estephanie Cuevas, who said she was around 10 years old when the United States attacked Afghanistan, was one of those asking to bring the U.S. wars to an end.

Cuevas, Socialist Alternative member, said she believes the war is the cause of the sluggish economy, which has cut short the dream of many young people who would pursue higher education.

“Many government grants and scholarships were cut,” she said. “Young people gave up on the American Dream they’ve always dreamed of.”

Since the combat began 11 years, more than 2,000 U.S. personnel were reportedly killed in Afghanistan.

President Obama announced last year that the American troops would be brought home by 2014 — with a plan to train Afghan National Security Forces to take up responsibility for their country’s security.

In the meantime, the Obama administration continues to deploy troops to Afghanistan and Iraq. Overly’s brother, for example, was deployed last month for his first tour.

Hoping to bring these troops back home and to officially end the war, Overly promised to continue protesting against the war.

“We must continue to show the warmongering politicians that we do not support the war agenda,” she said. “We will not stand to see our brothers and sisters shipped off to war to be murdered and to murder other innocents.”

After speeches by some Minneapolis activists, about 100 protesters took their frustrations to the streets on their way to a closing rally at Loring Park in downtown Minneapolis.

Together, they chanted, “Hey, Hey, Ho, Ho, Occupation has got to go.”

The event was part of national coordinated anti-war protests held in major cities across the country to mark the anniversary of the start of the war in Afghanistan.