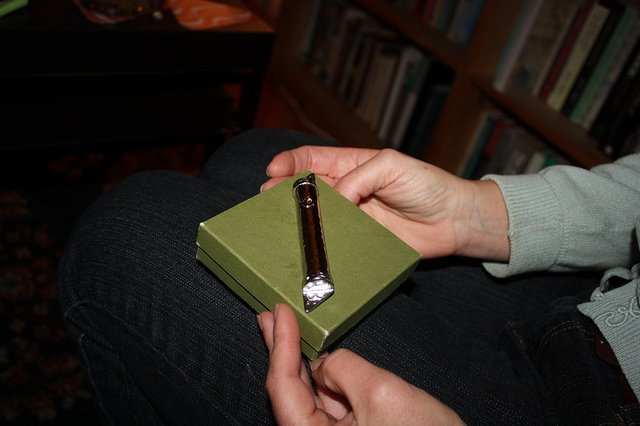 If you’re a single mom, you already know the last thing you’re thinking about when moving out of your old, married life is a mezuzah. So why am I thinking about them?

The day before, I had told an Orthodox friend I was moving. She asks if I had mezuzahs to bring along. “I, uh, hadn’t thought much about it,” I say, which is only a partial truth; I hadn’t thought about it at all.

“But when people don’t have good mezuzahs it’s a problem,” she says, “In fact, it’s the reason there is so much trouble in the world.”

I look at her and she looks back at me and I realize she is quite serious. Though normally I might smile politely and talk of something else, the idea of a mezuzah protecting me from all the trouble in the world rings true. Because you’re not only leaving home when you leave a marriage. You’re leaving everything you thought was right about your life.

“By the way,” my friend says, “those mezuzahs need to be kosher. If you want, my husband can inspect them.”

I smile at her, trying to buy time before replying. I am moving to St. Anthony Park, hardly known for its Jewish traditions. My head is full of things I haven’t done and want to do; getting a sukkah and figuring out where I am going to put two sets of dishes. “I’ll find some mezuzahs and let you know,” I say. My friend directs me to the gift shop at her synagogue, which I promise to visit.

Now, late at night, I am thinking about the mezuzahs I want and where I’ll put them. I decide something ornate will catch my eye and brighten the house. The next week, I find what I’m looking for in St. Louis Park; a friend gives me something as well. These and the mezuzah I bought at my friend’s synagogue are enough, I think, to start.

Then comes the inspection.

“Ms. Zark?” a man’s voice intones when I pick up the phone three days later.

He introduces himself, explaining he is my friend’s husband. “Sorry. But only one of your mezuzahs are kosher.”

Apparently the pretty ones don’t have the right scroll or the right kind of scroll. “Can I get some new ones?” I ask. My inspector is opposed to this idea and thinks I should get new mezuzahs from his synagogue, instead.

I thank him and hang up, trying to finish making dinner and rid myself of all the horror-movie images suddenly flooding my mind. I can’t help seeing a little newsreel of everything that COULD go wrong if I don’t get a truly kosher mezuzah on the doorpost of my house.

I want to tell you I’m not superstitious, because Jews are not supposed to be.

But I’m superstitious. I am.

I look at my son, pulling pots and pans out of the lower cupboards in the kitchen so he can bang on them. I had grown up Jewish but never done much more than glance at the mezuzahs on my doorposts. Were they really so important? Why?

I decide to do a little research, and read what I already knew: mezuzahs are supposed to be placed on the doorposts of every Jewish home. Mezuzahs should be a daily reminder of Jewish identity and faith.

What’s inside those long, thin containers? Mezuzah scrolls contain the first two paragraphs of the Shema prayer, commanding us “to write the on the doorpost of your house and on your gates” (Deuteronomy. 6:4-9). Jewish writings also say having a mezuzah on the door of each room means whenever we move from one room to another, we bring the presence of God with us—in a way that sanctifies God’s name.

Fine, I think. I know this stuff, but it’s not something I’m going to deal with when I look at doorpost. Sorry, but… it’s not.

Then I read something that makes me want to read more. It says something about mezuzahs keeping away evil spirits. Not like the ones in horror movies, but the monsters in our minds and hearts. And having just gone through a divorce, I know those monsters. They’re persistent. And real.

Which means I probably (OK, really) need a kosher mezuzah. But what does that mean?

To be kosher, a mezuzah must be hand-written on genuine parchment. A specially trained scribe, known as a sofer, carefully writes the words using special black ink and a quill pen. The letters must be written according to halacha (Jewish Law). Every letter and word must be correct; any mistakes or missing letters invalidate the entire parchment.

I sigh, not wanting to give up my ornate mezuzah. Could I get another kosher one and keep the pretty one? Maybe on a doorway underneath a kosher one?

In the end, that’s what I do. And I must tell you, throughout the year or two we live at that apartment, I skirt no end of trouble—from carpal tunnel to money troubles and all kinds of things in between.

When we move to our new house, I am engaged, and a month after moving in, get married. I bring all the mezuzahs with me and get some new ones. I haven’t seen my Orthodox friend lately, but if I do, I’ll tell her. I’m doing my part to keep all the trouble out.

And on nights when things feel scary and I think those monsters are surfacing again, I still reach up to those mezuzahs. More than you think.