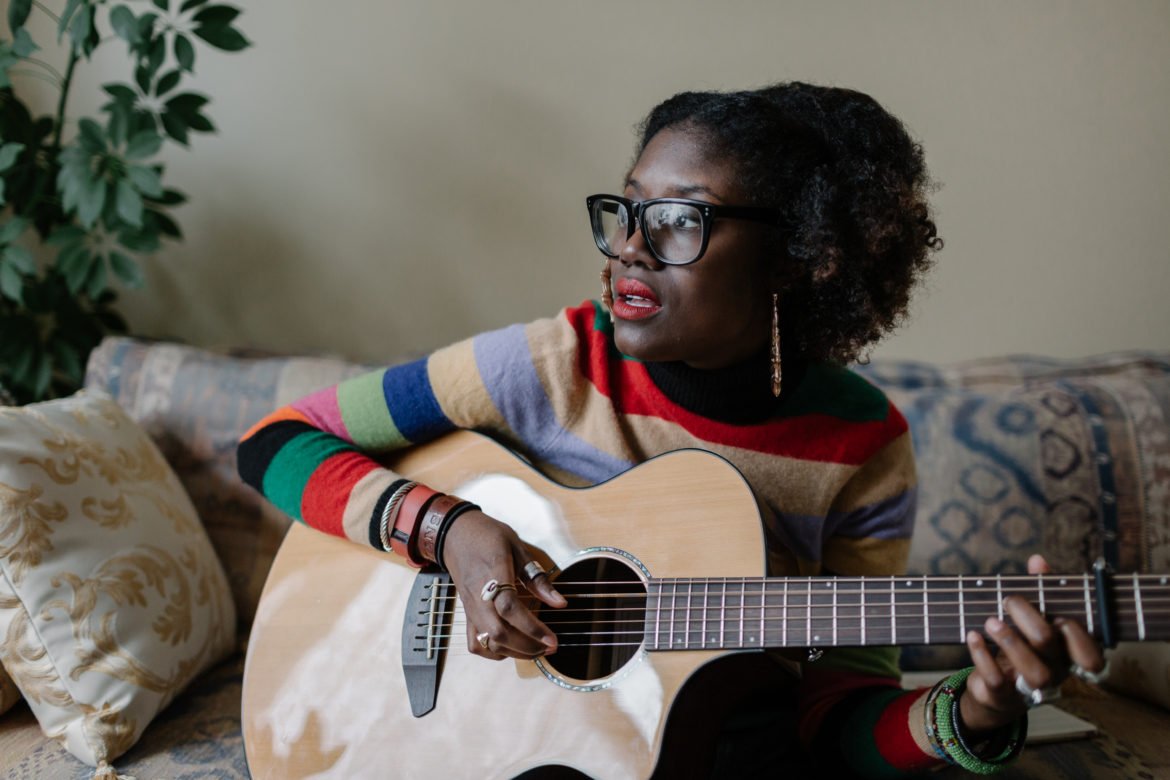 Singer-songwriter Mayyadda Munkunjae brings all of herself to her music. Photo by Alexa Aretz.

Two years ago, if you had told Mayyadda Major that she would be performing at Minneapolis’ Dakota Jazz Club, where the likes of Prince, Esperanza Spalding and Vusi Mahlesela have graced the stage, she would probably have scoffed. But this is exactly what happened last July when Mayyadda, a singer-songwriter and instrumentalist who performs by the stage name, Mayyadda, found herself on the club’s late night roster.

When I ask her about how she got the gig at the legendary Dakota, she told me, “It’s all about who you know,” and relays a series of events that begin at the Fourth Precinct occupation and end with her opening for Davina and the Vagabonds at the Lowertown Line. Impressed by Mayyadda’s voice, bandleader Davina Sowers asked if she had ever played at the Dakota. When Mayyadda said no, Davina got her name into the right ears at the Dakota, leading to her July 8 show last year.

Anyone in the music business knows it’s all about who you know, but having the right stuff goes a long way too. Don Strong, one of the three producers on Mayyadda’s upcoming EP, recounts the moment he heard her sing for the first time. “I was at Moto-i one evening Mayyadda was singing and I was kinda struck by her sound and vibe. I went to the bartender and said ‘who’s that?!’”

When Strong introduced himself he and Mayyadda struck up a conversation with ease. “Mayyadda is a very animated person, she talks with her hands and her eyes sparkle. There’s something sparkley about her personality,” attributing some of that upbeat energy to the high of just killing her stage performance, “she was extra on that evening.”

The two music buffs sat and talked candidly for what felt like hours. Strong was intrigued by Mayyadda’s musical aesthetic and unique sense of style which was somewhat explained by her choir days at Breck school. Strong frequents Twin Cities open mics a lot, but after meeting Mayyadda,“When I heard her, she inspired me,” he said. 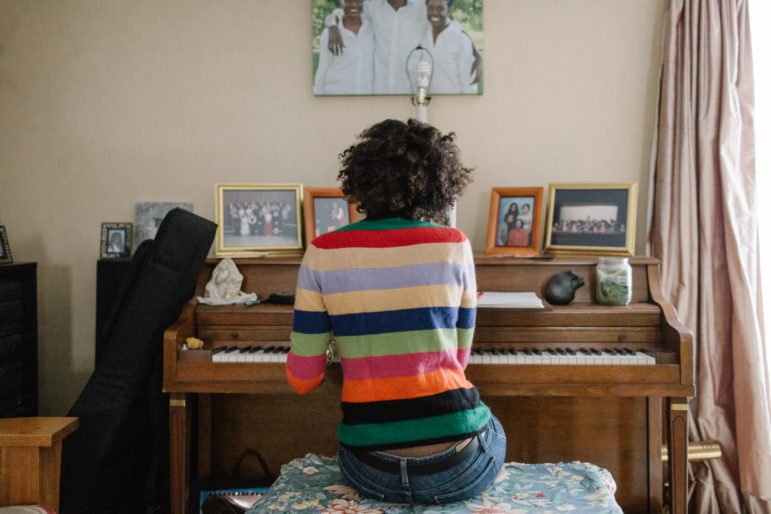 Mayyadda tends to have that effect on people – with a honeyed voice that penetrates the air in songs like Blue where she takes you through agonizing heartbreak – her voice and songwriting inspire memories of India Arie’s early days, with deeply soothing melodies matched by relatable lyrics that make social commentary. On the cusp of releasing her second project, “EIGHTYNINE,” Mayyadda tells me of her unexpected journey from Ivy League student to professional musician, with a monthly set at St. Paul’s Vieux Carré (formerly the Artist’s Quarter).

“I’ve always been singing and performing,” she said, “but I didn’t consider it as a career for a long time.”

Mayyadda, who started piano lessons a few months before her third birthday, taught herself how to play guitar at age 14, and performed in choirs, musicals and a capella groups throughout her education, didn’t have a fool proof plan for her Ivy League degree as she neared graduation. When she was a senior at North Carolina’s Duke University, double majoring in religious and Arabic studies, she watched as many of her peers prepared themselves for high-income banking and finance jobs. She felt paralyzed, like many young people, between the sensible thing to do and the pursuit of her own dreams.

A child of Liberian immigrants and educated in one of Minnesota’s most prestigious private schools, Breck School, Mayyadda said she always felt the pressure to make her education “count.” This, coupled with the very limited definitions of success she encountered at both Breck School and Duke University meant that music was not what she looked toward when she thought of establishing herself career-wise.

“In these environments, success was presented as, ‘you’re going to be a business person, or a doctor, or a lawyer and you’re going to be rich.’ That’s how you know that the sacrifices you made were worth it,” she said.

With the pressure mounting as she entered the first semester of her senior year, Mayyadda decided to take a leap of faith.

Fear of regret might lead you to the path but there’s no guarantee that once you’re there it’ll be easy, or cheap.

“She had to raise some money to do this. I gave her info on crowdsourcing and Kickstarter. She reached out to her peeps – college friends,” Strong said, “she already had demos and people supported her.” When she raised enough capital for studio time and to hire a team Strong says she called him and said, “I’m ready to do something.”

Deeply religious, Mayyadda also decided to trust her faith in God to lead her down that path. Almost immediately, she began to receive affirmations that she had chosen wisely. At home during winter break, she decided to tell her mother about her decision to pursue a career in music. Her mother, surprisingly, reacted well. A few weeks later, on New Year’s Day, she picked up her pen and started songwriting. One of the three songs she wrote, “Hey Mister,” would later make it onto her first EP and become one of her most performed songs.

In the fall of 2015, Mayyadda moved back to Minneapolis and started performing at local venues and open mics. Most of her extended family was and remains supportive of her musical journey. Her friends, who she tells me had believed in her long before she did, gushed when they saw her perform, “I knew you were going to be this great!” they told her. At her cousin’s urging, Mayyadda went to South Carolina where her cousin Dee helped engineer and produce her first EP.

Making her own sound

Her forthcoming EP, due Feb. 10, is both a window into her creative process (with most of the songs hovering around 89 beats per minute) and a tribute to her grandmother who will be 89 when the EP is released. Influenced by the likes of Ed Sheeran, SZA, Lauryn Hill, India Arie and Kirk Franklin, Mayyadda’s music is both political and personal. She has written songs about the sorrow many felt in the aftermath of Michael Brown’s death and the Charleston Massacre. And while Mayyadda doesn’t feel that most of her music is “explicitly Black,” she stated, “as a Black woman, everything I’m writing is about the Black Experience.” 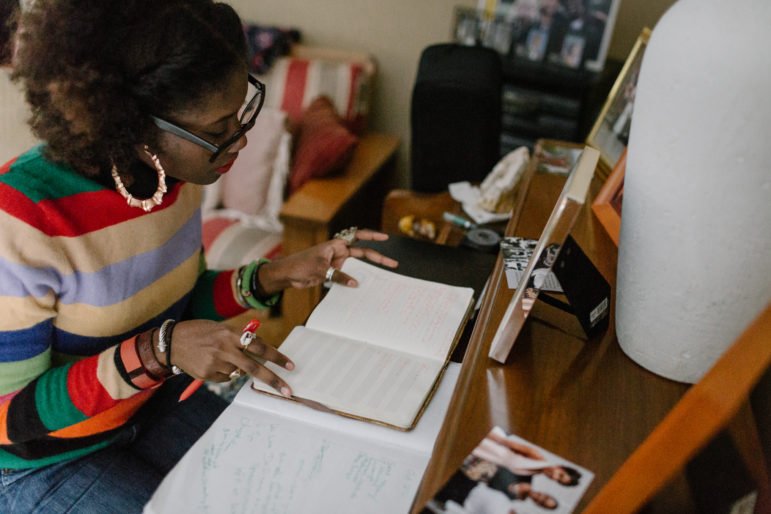 “She has a really nice sense of metaphor in her songs. Blues, gospel flavor, call and response. Sometimes people would compare her to Tracy Chapman – the timbre of her voice is higher,” Strong said. “It can be kinda bluesy, gospel flavor, neo soul, R&B. It’s unique, strong and has a lot of character.”

“She has an interesting guitar style too, it’s percussionist,” Strong went on to say. “It’s like eating grits and gravy and someone puts a pineapple on your plate.” During studio sessions and live shows Mayyadda plucks her strings and taps on her guitar like a drum.

“By virtue of being a Black woman who is exploring these different emotional palettes, it shows that we are not a monolith. That we also have the entire depth of human emotion that is attributed to white singer-songwriters,” Mayyadda said.

With 55 songs already written and a trio of producers backing her (Strong, Andre Mariette and Malcolm Wells), I asked Mayyadda what her intentions are with her music, or who she makes it for.

“It’s a lot of cathartic stuff,” she replied. “I want to invoke the feeling of release and get you lost in a story long enough to process those emotions. If it’s something that you personally experienced, that’s cool, but if you haven’t, helping you expand your empathy and identify with someone else’s struggles.”

Do her songs register with white audiences? Yes. Mayyadda tells me that she is well received “across the board,” but what changes is the response from the audiences. For instance, late last year she played a show at Northeast Minneapolis’ Honey with a primarily Black audience in attendance. The energy was different.

“I had people respond in the middle of the song, which I loved,” she said. Mayyadda is excited over her growth in the last year, which has seen her move from primarily acoustic singing to incorporating beats built in conjuction with her producers, Andre Mariette and Malcolm Wells. Another cousin, Jande, became her manager and she is working on establishing herself on the local scene.

By every measure, Mayyadda is in the emerging state of her artistry. That strange phase where you realize you can fly and that a larger public (outside of your friends and family) values your creative output, but there are still bills to be paid and reality to be dealt with. Living at home has helped with the costs of pursuing her dreams and Mayyadda currently works as a teaching artist at Washburn High School in South Minneapolis.

“I am not starving by any stretch of an imagination,” she said. “It feels more insecure than where I thought I would be at this point in my life, but I’m learning to sit with that and let God take care of it.”

Strong’s faith rests in his keen eye for talent, an abundance of which he said Mayyadda possesses, “she’s got a sound, she’s got concept, she’s beautiful, she’s got a look, she’s got a career.”

Mayyada’s next live performance is Saturday Feb. 18 at Vieux Carré. You can listen to her new album set to be released Feb. 10 via SoundCloud, Bandcamp or Spotify.