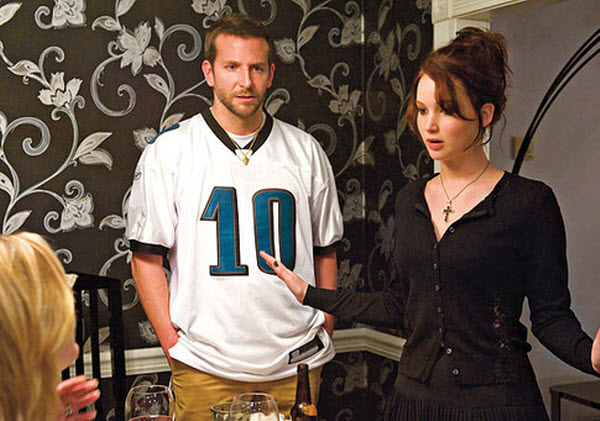 Finding out your ex-wife cheated on you and losing your job in the same week is enough to drive anyone insane.  For Pat (Bradley Cooper), this is a reality that destroyed his life.  After a brief stint in a mental institution (perhaps too brief if you ask his doctors), Pat comes home to his parents’s house in Philadelphia.  Hell-bent on retaining his old life and wife, Pat goes to work on becoming the man that he believes Nikki (Brea Bee), his ex-wife, would want him to be.  Pat’s head is clouded.  Pat cannot seem to separate the past from the future and is stuck in a rut.  Enter Tiffany (Jennifer Lawrence), a young widow that flew off the handle after the death of her husband.  Tiffany became unhappy with life, transforming into a tease around the office when her husband Tommy died.  Tiffany and Pat become a very strangely connected pair of misfits.  Their brains do not work the same way that the rest of the world’s do, and how could they?  Having seen horrors and terrible situations happen to them at such a young age, there could be no possibility of normalcy.

Pat and Tiffany kindle a relationship around the possibility of building a positive relationship outside of family, and possibly proving to people that they are capable of normalcy. Turmoil surrounds these two like white on rice. When things look like they are finally turning around and the two have helped each other right their proverbial ships, a storm comes in the form of a Philadelphia Eagles game. Pat is forced to go to the game by his father, Pat Sr. (Robert De Niro), who himself shows obsessive compulsive tendencies, in the hopes that his presence will turn the juju of the team around and help him pull a mammoth haul against a rival bookie. When things don’t go according to plan, a family intervention ends on some very exciting terms!

Writer and director David O. Russell hit a homerun with this screenplay.  The characters and relationships within this story are truly able to hit home to a wide demographic of the viewing audience.  This film is already being hailed as a big smash.  It has gained four Golden Globe nominations: Best Actor (Bradley Cooper), Best Actress (Jennifer Lawrence), Best Screenplay, and Best Picture: Comedy or Musical.  And not only did it receive Golden Globe nominations, but eight Academy Award nominations as well!

The cast of this extremely amazing film really put it all on the line and delivered amazing performances!  It will be very fun to see come Oscar time if this film has what it takes to upset Steven Spielberg’s epic, Lincoln, the odds-on favorite that was just upset at the Golden Globes by Ben Affleck’s Argo.  Personally, I think this film has what it takes to bring home the Oscar!

Bradley Cooper and Jennifer Lawrence deliver the best roles of their careers, as their roles demanded absolute perfection because of the details needed to play characters with such distinctive personality traits.  The time and dedication to the screenplay and characters shows through on the screen and in the eyes of the Academy, as Cooper and Lawrence received multiple nominations for their roles.  Jennifer Lawrence has already picked up one win at the Golden Globes and is looking for a second at the Oscars.

I strongly recommend seeing this film, as it is an absolute winner.  I give it 5 out of 5 stars and a grade of an A!  I expect great things out of this film during awards season, and be on the lookout for more outstanding performances from both Bradley Cooper and Jennifer Lawrence as these are two actors that have what it takes to stay around for a long time!

Silver Linings Playbook has a runtime of 122 minutes and a MPAA rating of R.  You can find showtimes for this wonderful film online at Fandango.com as it has a limited release!

Please leave us comments, email us, tweet us @tuesdaymoviemen, and like us on Facebook!  Your feedback is extremely important to us as we are trying to climb the ladder in this showbiz thing, since it is apparently sticking around!