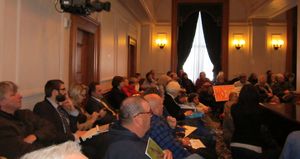 While Southeastern Minnesota’s bluff country from Red Wing to the Iowa border and the placid little Minnesota River from the metro to Mankato may have been strangers to the sort of divisions with which mining politics have cursed Northeastern Minnesota, a joint hearing on frac sand mining appears to have lifted that blessing.

Testimony fractured between grassroots citizens, conservationist organizations, and local government seeking regulatory relief, a generic environmental impact statement (GEIS) and representatives from the Minnesota Industrial Sand Council (MISC), a trucking company owner, the Minnesota Chamber of Commerce and the powerful “49ers” or the International Union of Operating Engineers claiming that the industry was capable of monitoring itself.

Another fracture line? The splintering of stereotyped partisan politics that place Republicans and industry in one camp, and DFLers, conservation and environmental groups in opposition.

These fault lines, with powerful interests allied on the part of MISC, may make passage of new legislation difficult, despite the overwhelming numbers of grassroots frac sand critics filling both rooms of seating for the testimony. Two buses brought 70 local citizens to St. Paul from Southeastern Minnesota.

The number of critics’ testifying also dwarfed that of industry supporters. Forty-one individuals and groups signed up to speak, although time didn’t allow all to speak. Five agency staff testified, all seven pro-mining groups and business owners spoke, and twenty-nine local government officials, conservation group representatives, and grassroots activists signed up to speak, although time ran out.

Former state senator John Howe, R-Red Wing, spoke in favor of a GEIS; the man who defeated him in November 2012, Matt Schmit (DFL-Red Wing) is expected to introduce legislation to mandate and fund a GEIS. MPR’s Tom Scheck reports that while “a statewide moratorium is on the table but [Schmit] declined to give more specifics.”

Howe served as Mayor of Red Wing until the beginning of 2011, when he was resigned to take his seat in the state senate. Current Red Wing mayor Dennis Egan, embroiled in ethical questions raised by his appointment as the Executive Director of the Minnesota Industrial Sand Council, did not testify.

Dave Frederickson, state agriculture commissioner, spoke in his role as chair of the state Environmental Quality Board, noting that the issue of frac sand mining had come up during recent citizen forums across the state, especially in the Rochester session.

Citizens had petitioned the EQB for an GEIS and given testimony for a study at a EQB meeting, and pro-mining interests had been given time at a following meeting to present their position. Frederickson said that while the board has the authority to order a study, it must also secure funding for the expensive studies from the legislature.

Representatives from the Minnesota Pollution Control Agency (MPCA), the Minnesota Department of Health (MDH), the Department of Natural Resources (DNR) and the Department of Transportation (MNDOT) testified about their agencies regulatory authority and concerns. New to the debate: MNDOT concern that vistas on the Great River Road–might not be so great if sight lines are disrupted by mines.

The entire hearing is embedded below; we’ve pulled some highlights of activist and industry testimony below.

While the highlights may seem weighted toward the grassroots side of the divide, that reflects the list of those who signed up to testify.

Township and county elected officials testified that they need the state’s help to negotiate the complicated regulatory issues posed by the massive new scale of industrial sand mines being proposed in their communities. This scale has created a much different regulatory environment than that which they’ve faced with the gravel and sand pits that now operate–usually just a few dozen acres at most.

Recent experience seems to show that when local government decision makers cannot find answers to the questions about public health, environmental, transportation and economic issues, these decisionmakers tend to freeze. They freeze in place and they make no effort to provide real solutions on the local level. They need the scientific help from state agencies to even help them make decisions in addition to the decisions they are making for themselves.

Their testimony was underscored by Chippewa Falls WI frac sand activist Pat Popple, who shared the experience in her community where the industry got ahead of state and local government. Part of her testimony:

In Wisconsin, we have had numerous spills from several mines. Not all are reported; in fact, most of them . . .have been reported by citizens. A flood at the EOG plant while it was underconstruction. In Grantsburg, the Tiller Corporation . . .poured all sorts of things into the St. Croix River and that is now under litigation and investigation by the attorney general and other agencies.

In the Larkin Valley near Blair, WI, there was a major breach. A five-foot wall of water and sludge took out an Amish barn and other buildings. . . .and Trout Creek in Chippewa County, also reported by a citizen, a wastewater pond gave way and spilled into the creek. The land conservation in Chippewa County also helped clean up, the fine by the county of a little over $4100 will never pay to recover that creek, and the fish and trout that are in it.

Sigurd Anderson of Lake City, Goodhue County, testified that after months of meetings with citizens and local and county officials:

. . .it became clear to many of use that local and county government agencies and officials did not have the background, training, technical expertise, time, staff or monetary resources to adequately respond to the power and skill of mining companies backed by multinational energy corporations and the implied consent of federal agencies.

Anderson joined a group that petitioned the Environmental Quality Board for a GEIS because industrial scale mining isn’t a good fit for the region.

Land Stewardship Project legislative director Bobby King called for rewriting the state’s non-metallic mining standards and a GEIS backed by a moratorium on new mining, citing the state’s experience during the process of writing the feedlot GEIS. He pointed out that state agencies and local control could work together. Local elected officials were asking for state help in permitting but wanted state regulations that would establish a floor that would still allow local government to set conditions in their permitting and to write their own zoning and land use ordinances.

St. Paul documentary filmmaker Jim Tittle, who was raised in Goodhue County and still has family living in Hay Creek Township, presented an excerpt from The Price of Sand:

Like the mine owners, Kwilas stressed that the sand industry had been in place for over 100 years in Minnesota, with some operations on their second or third generation of family owners deeply embedded in the civic and economic life of their communities. He also noted that thesand they extracted wasn’t merely used for fracking, but for abrasives, filtration systems, in glass, in tubs and sinks, and “if you’re as bad a golf as I am, a lot of times, and much to my chagrin, it’s used on our golf courses where my ball ends up when I hit wayward shots.”

Kwilas urged lawmakers to remember that the industry provided jobs now, could provide potential jobs, and that it was important to find “a delicate balance” to promote these jobs in a struggling economy while also protecting the environment and natural resources. Greater Mankato Growth (the local chamber) has estimated that for every job created, 1.8 other jobs were generated. He concluded with the observation that those who had paid attention to agency and industry testimony would realize th at this was “one of the most heavily regulated industries that we have in this state, either through the state, through local, township, or county ordinances that you’ve all these folks testify . . .” 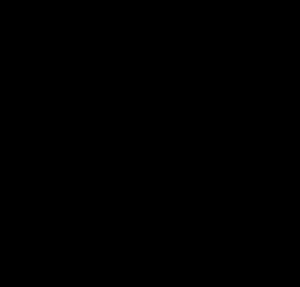 Kwilas turned the mic over to Jason George, legislative and political director of the 49ers, in a show of business and labor cooperation. About 13,000 heavy equipment operators in three states, hundreds of whom working aggregate and sand mining, are members, he said, noting that they work in permanent full-time positions paying between $25-$30 per hour with health insurance for families and pensions. 49ers working in pits also enjoy less travel time to work and more time with their families than other members who work in construction and must travel to distant job sites.

What you do here this session will have consequences There are complex issues to debate when it comes to sand mining as you’ve heard today. You’ve heard both sides of it. Far too often in this political climate, the answer to complex issues is a simple no. We believe a statewide moratorium or a GEIS is a simple no. I’m asking you and much more importantly, the people who are here today and the people that I’m representing are asking you, that want to make a future working in this industry are asking you, let’s find a way to say yes, to find a way that protects the environment and creates these good family-sustaining jobs.

The Senate the Committee on Environment and Energy will discuss silica sand mining bills on Tuesday, February 26 at noon in Room 123 Capitol. Bills will be added to the agenda as they are introduced.

Photos: All chairs in the second overflow hearing room were filled with sand mining supporters and critics; several dozen people listened while seated on the floor (above). Mining workers waiting to enter committee room (below)