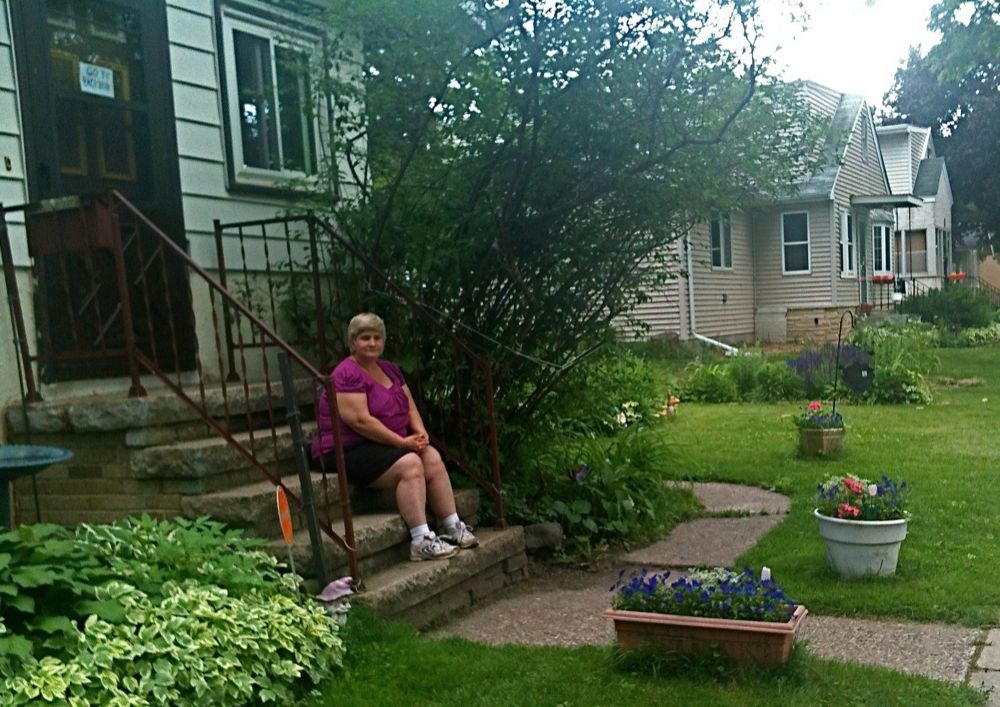 Carol Overland sits on her front stairs in her St. Paul neighborhood. (Photo by Alleen Brown)

Active in her church, outdoors often with her home daycare, and prone to taking long walks, Carol Overland is one of those ladies who everybody in the neighborhood knows, or at least recognizes. She’s lived on St. Paul’s East side for 35 years.

In the last three years, she’s noticed something new. “They put up a blue sign or a white sign and it’ll say ‘Notice of Foreclosure,’” she said.

Since April 2011, more homes with zip codes on the East side have been foreclosed on than in any other part of St. Paul. Ward 7, encompassing the East side neighborhoods of Dayton’s Bluff, Sunray, Battle Creek and Highwood, contains nearly a quarter of the city’s vacant buildings.

Overland lives just outside of the neighborhoods hardest hit by the crisis. Her house is considered part of the Greater East Side, and although home values in her neighborhood have dropped 46 percent since 2006, things aren’t as bad as in Dayton’s Bluff or Payne-Phalen.

It’s more than just blue signs she’s noticing, though. “I’m not being paid,” the daycare provider said. “It’s either pay Carol or pay the mortgage.”

A recent report by the interfaith non-profit ISAIAH titled “Lost Homes: How the foreclosure crisis has hit the East Side and North End of St. Paul,” describes the crisis. Members of the organization are pressuring city officials to implement solutions laid out in the report.

“There’s this silent, selective tornado that’s just touching down and—Bam. Bam. Bam,” said Jonathan Zielske, pastor at Hope Lutheran Church, near Overland’s home. “If it were a real tornado or a real flood, city officials would all rush and try to do something.”

The coalition is pushing hardest for a foreclosure mediation program that would encourage bank representatives and foreclosure candidates to sit down with a third-party mediator and come up with a solution that works for everyone. They argue that mediation could prevent foreclosure for some homeowners and offer a graceful exit for others.

The solution would address charges that banks have pushed homeowners out only to resell homes at prices the original owners could have afforded. Foreclosure mediation has been implemented throughout the country in places like Milwaukee, Philadelphia, and Nevada. According to the left-leaning think tank Center for American Progress, more than 70 percent of mediated cases reach a mutually agreed-upon settlement.

Although a state bill that would’ve created a mediation program in Minnesota was vetoed by former governor Tim Pawlenty in 2009, ISAIAH says the city could implement its own program.

Roots of the crisis

In some cases low-income homeowners and homeowners of color were intentionally targeted by finance companies that appeared to be banks. Some of those companies used ethically questionable tricks to lure struggling homeowners into their businesses.

That was just an entry point. A deposit gave the company the right to run a credit check. After looking at a homeowner’s debts, they would contact the individual with a proposal to refinance their home. The Wells Fargo name meant many people didn’t realize they were dealing with something other than a bank.

One out of six refinances made by Wells Fargo on the East Side and North End was through Wells Fargo Financial. In the rest of the city, only one in 14 of the corporation’s refinances went through the subsidiary.

New Century Financial, the second largest subprime mortgage lender in the country used more traditional methods to ensnare residents of neighborhoods on the East side.

In July 2011 the Federal Reserve forced Wells Fargo to pay an $85 million penalty for steering even customers who qualified for better rates towards expensive subprime mortgages, but residents of low income and non-white neighborhoods continue to feel the reverberations of the corporation’s practices.

That fact, and a recession economy’s habit of hitting the poorest the hardest, have combined to empty out many longtime family homes in diverse, low- to moderate-income East Side neighborhoods.

Kathy Lantry, city council president and representative of Ward 7, the section of East St. Paul hardest hit by foreclosures, said that, aside from ISAIAH affiliates, she doesn’t get many phone calls from East-siders complaining about foreclosures.

“I think that the only thing that probably gives folks some comfort is that this is a national problem,” she said.

Zielske suspects shame keeps people from coming forward, “They don’t want to tell their story, because they’re embarrassed,” he said. “We have so much of this mentality of individualism, and pull yourself up by your own bootstraps.”

Lantry said ISAIAH’s mediation proposal is just one approach the city is looking at. She said St. Paul already has a foreclosure prevention program, which involves some city-sponsored mediation. One idea is to beef that up.

She sees a myriad of unaddressed challenges to the mediation idea: there hasn’t been enough research on outcomes; resources are limited; toothy mediation would work best coming from county courts; it would be difficult to force banks to participate.

Three years ago Overland and her husband cut up their extra credit cards and eliminated frivolous spending, including Overland’s once-regular donations to local fundraisers. Their cuts allowed them to keep a house whose mortgage rate stayed constant as its value dropped more than 50 percent.

She’s lucky. Last year, she joined a walking prayer vigil organized by Hope Church, stopping in front of familiar and now-empty homes. “We said a prayer to make sure that those individuals in that house, that those people found another avenue where they would be able to be taken care of in one way or another, where they would not be on the streets.”

“Every twelve houses had a foreclosed sign,” she said. “Either they foreclosed on their homes or they moved out of here, because they could not afford a little bitty house like this.”

As for the city council? Overland said, “They have not walked these streets in months. They don’t know.”