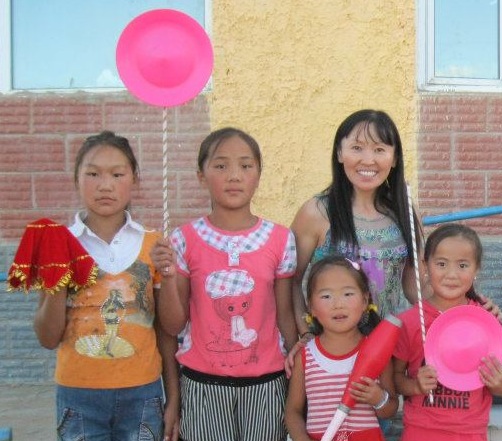 A victim of domestic abuse, Chimgee Haltarhuu (back, right) is on a mission to help children in her home country of Mongolia. (Submitted photo)

In March, several hundred protesters gathered at the state Capitol to call attention to a growing surge of Twin Cities women being domestically abused.

One statistic pulled them together: Eight women killed this year, allegedly by husbands or boyfriends they were trying to leave.

Their names have become headline news: Kira Trevino, Margorie Holland, Manya Johnson, and in late February, Anna Hurd, a 16-year-old from Maplewood, who was murdered in Hillside Park. Her boyfriend pleaded guilty to the crime last week, and according to news reports, was “controlling” and “jealous.”

Added to the list in late April is 19-year-old Rebecca Kasper, a Northfield High School grad who was attending Arizona State University. She was reportedly found handcuffed and beaten in the bathtub at her boyfriend’s apartment. He’s accused of her murder.

Anna Sahli, a violence prevention educator at Harriet Tubman Center West in Minneapolis, sees domestic violence cases every day. She travels to Twin Cities schools to talk about healthy relationships with teens. When Sahli broaches the topic of domestic violence, a lot of them are unaware of abusive tendencies in relationships and say “that doesn’t happen here.”

“But usually after one lesson and talking about the types of abuse, they’ll say, ‘Oh, my gosh, that’s happened to me,’ or ‘Oh, my gosh, I’ve been an abuser.’ You only know once you become educated,” she said.

Education about abuse is important because teens tend to make judgments based on what they see — for instance, a black eye or a couple in a heated argument. Sahli’s job is to make sure that students know all the facts and train themselves to make deeper observations about warning signs.

Typical red flags for abuse include: Isolation, or the deliberate act of being separated from friends and family by the abuser; exhibiting a controlling personality, or an abuser repeatedly telling a partner what to do or excessively checking up on them; and anger, which could start with an arm grab and escalate to worse behavior like pushing, hitting and shoving.

“Looking at someone, you can’t always tell. A lot of times, students will approach me and say, ‘I’ve been abused and not a single person knows it,’ Sahli said. “Being able to identify a victim is impossible just by looking. If you want to hide it, you do hide it.”

Talking about abuse isn’t easy, especially for teens who don’t have experience in relationships and might not know what’s unhealthy for them. For Chimgee Haltarhuu, it was made more difficult based on where she grew up.

Haltarhuu, 48, is a coach with Circus Juventas in St. Paul and an advocate for the National Center Against Violence (NCV). A victim of domestic abuse, Haltarhuu said living conditions in her native Mongolia meant that, from an early age, young people were trained to not seek help for abuse or even talk about potential mistreatment.

“When I was a child, people thought it was part of ‘normal’ society for abuse to occur in the home (specifically on women). After all, the men back then were in control of the majority of things,” Haltarhuu said.

“There were no resources back then in Mongolia. No shelters, no doctors, no computers or technology like now of any sort. We had to deal with it. Talking about it made it worse. The only thing that I could do is continue to live my life and hope for an opportunity to leave.”

When she was 22, Haltarhuu married and had a son, Tamir Bayarsaihan, who also works as a coach at the Circus Juventas school. Haltarhuu relived her childhood nightmare as an adult when she experienced domestic abuse again.

This time, she was able to escape. When Tamir was five, Haltarhuu moved to America after the Ringling Bros. Circus chose her to perform with them.

America’s resources and emphasis on helping domestic abuse victims prompted her to become an advocate, especially for young people in Mongolia who can’t speak up. In mid-April, she organized a fundraiser at Circus Juventas for abuse victims in her home country.

“Three years ago, I was on a mission. That mission was to give resources and educate the people who live in Mongolia,” Haltarhuu said. “My mission is to help the younger generation know about domestic abuse and be able to have the strength and knowledge to fight against it.”

That’s where education is key and why Sahli spends so much time in schools developing relationships with teens who, hopefully, feel comfortable opening up. But not all teens take advantage of resources available, or again, keep their abuse hidden.

Tubman serves women and children 18 or older who have been abused, along with young mothers (16- and 17-years-old) who need help. Another resource at Tubman is the Youth and Young Adults Program (YAYA), which is specially designed for males and females, ages 13-24, that are experiencing dating violence, domestic violence, sexual assault or stalking.

According to the StarTribune, 63,267 victims sought services from Minnesota domestic violence programs last year. However, advocates noted that the number is not fully representative of those abused since only one out of every five victims seeks help.

The glaring omission in those numbers — reports by men. Experts like Sahli are aware that abuse exists for men, but because they don’t come forward as often or identify as victims, funding isn’t made available to help them. However, there are Twin Cities shelters that target male outreach, but “not enough,” she said.

For teens that can’t help themselves, it’s important for friends and family to show empathy once they reveal their abuse, Sahli said. She cited on-off celebrity couple Chris Brown and Rihanna as an example of how a lack of sympathy can create unhealthy feelings toward both parties.

Brown, a popular R&B singer, was charged with felony assault in 2009 after abusing his then-girlfriend and fellow musician, Rihanna. Following the incident, the pair has been linked repeatedly. They continue to spread their interactions across social media, leading to public backlash for both.

“It’s easy to see on the outside what’s unhealthy. But if you’re in the relationship, you might remember the good times. Or maybe you’re in love. Or financially dependent on them. Or you have nowhere else to go,” Sahli said.

“There’s a million reasons why someone would go back. You take Chris Brown and Rihanna. That’s been a really popular situation to talk about. And I know that we’re all kind of, ‘Oh, Rihanna is a really bad role model’ (for going back to Brown). But none of us knows exactly what is going on. We don’t.”

It’s why Sahli likes to tell the story of psychologists in the ‘70s who wanted to see if there was a correlation between being abused as a kid and being abusive as an adult. They found twin boys who were physically, verbally and emotionally abused by their father, put them in foster homes where they were protected, then revisited their lives in the ‘90s to see how they behaved as adults.

“They lived in separate states, didn’t talk to each other very often and didn’t have contact with their father. And one of them, he was exactly like his father, and acted the same way to his wife and kids — physically, verbally and emotionally abusive,” Sahli said.

“With abusive relationships, sometimes it’s a matter of, ‘You learn it, so that’s what you know.’ But it’s important to remember that you’re always making a choice. You choose whether to be aggressive or not.”

Teens seeking help for domestic abuse can reach out to the following Twin Cities resources:

The Bridge: Emergency shelter, transitional housing services and individual and family counseling for youth. (612) 377-8800 and www.bridgeforyouth.org.