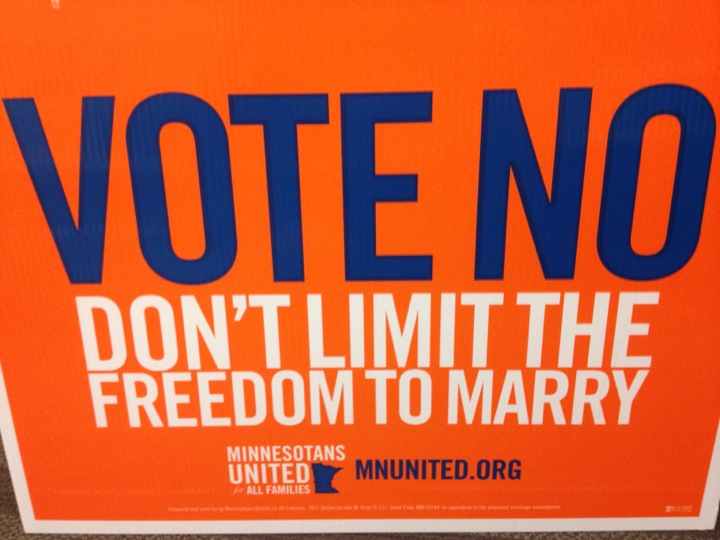 An August 17, the Winona Daily News posted a letter from Peter Martin who said his “Vote Yes” on the anti-gay marriage amendment was stolen from his yard.

To the person who stole the sign, Martin said, “I forgive you.”

The National Organization for Marriage touted Martin’s letter saying, “We in the pro-marriage movement know how often our pro-marriage yard signs are stolen. This is not an isolated or rare occurrence — it is an epidemic of theft and free speech suppression.”

Minnesota for Marriage even sent out an email alert: “Peter Martin used the Winona Daily News to send a strong message to the person who stole the pro-Marriage Amendment “VOTE YES” sign from his yard. Missing yard signs are an all-too common occurrence for Marriage supporters.”

NOM made a big deal out of yard signs being stolen in North Carolina in the spring ahead of a May vote on an anti-gay marriage amendment.

In court, NOM used affidavits from people whose signs were stolen to argue that it should not have to disclose donors.

But a judge in one of those case noted that sign-stealing happens to both sides in any heated campaign.

And that’s just what is happening in Minnesota.

“I was pleased as punch to get my “Vote No” lawn sign over the weekend — my neighborhood is a very swing-y one, and it’s important to get the message out in purplish suburbs like mine,” he wrote. “I planted the bright orange-and-blue sign right on the main road next to my property, and went on about my Sunday. Then we left the house this morning, and found that the sign had been stolen.”

Craig Thorsen, a Woodbury resident writing at the Patch, noted that his Vote No sign had been stolen.

“A yard sign in my yard was stolen overnight. Maybe the person disagreed with the sentiment of the sign, but does that give that person a right to deny my voice to be heard?,” he wrote. “The sign said, ‘VOTE NO’ and beneath it, ‘Don’t Limit the Freedom to Marry.’”

He added, “This kind of vandalism, although not painful, is harmful to our community.”

Though those instances happened in the suburbs, reports of Vote No sign vandalism has been occurring in Minneapolis and St. Paul as well.

As one Facebooker noted, “My sign torn to pieces and left in street. Sad that this issue brings out the hate in so many.”