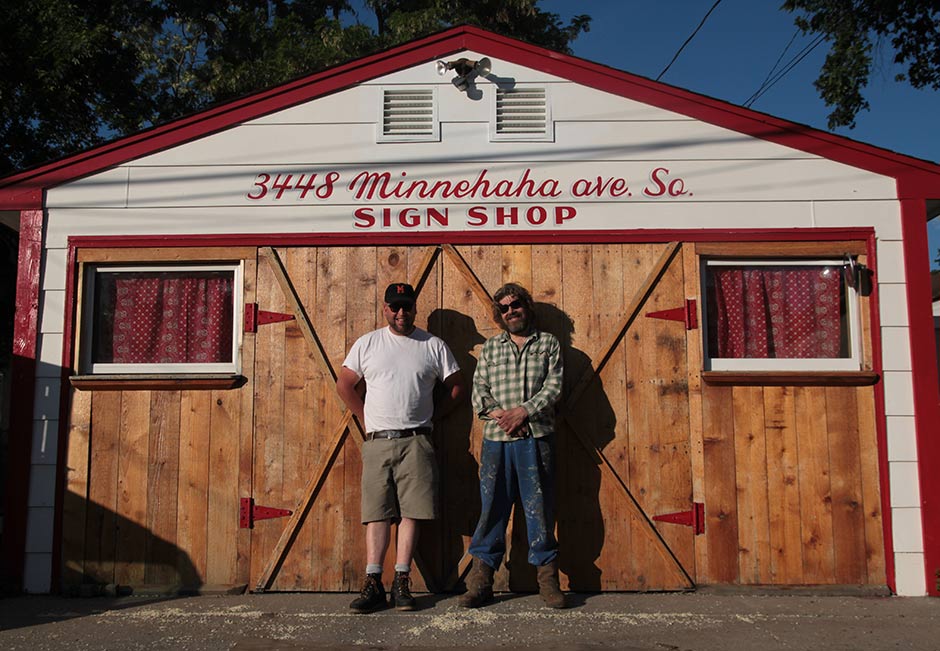 “I thought that some day either someone needs to do a film about me, or I have to write about this,” said Phil Vandervaart. He was explaining how his work as a sign painter has been for love, rather than for money.

The two are featured in the recently-published book Sign Painters by Faythe Levine and Sam Macon, as well as a film by the same name.

If you live in the Twin Cities, you’ve seen the work of Phil and Forrest. Many of the iconic images and shop signs you’ll find around town are their work, including the portrait of F. Scott Fitzgerald on the Fitzgerald Theater.

Phil has painted signs for 500 storefronts, done 25 Hollywood movies, and hundreds of rock videos. His hand can be found all over the West Bank. He said, “I did everything on the West Bank for 20 years, and I did 50 signs there and there are only 20 buildings, I used to just do them over and over again.” Forrest has been a sign painter for ten years, and has painted other notable places such as The Blue Door Longfellow, Forage, and the May Day Cafe. 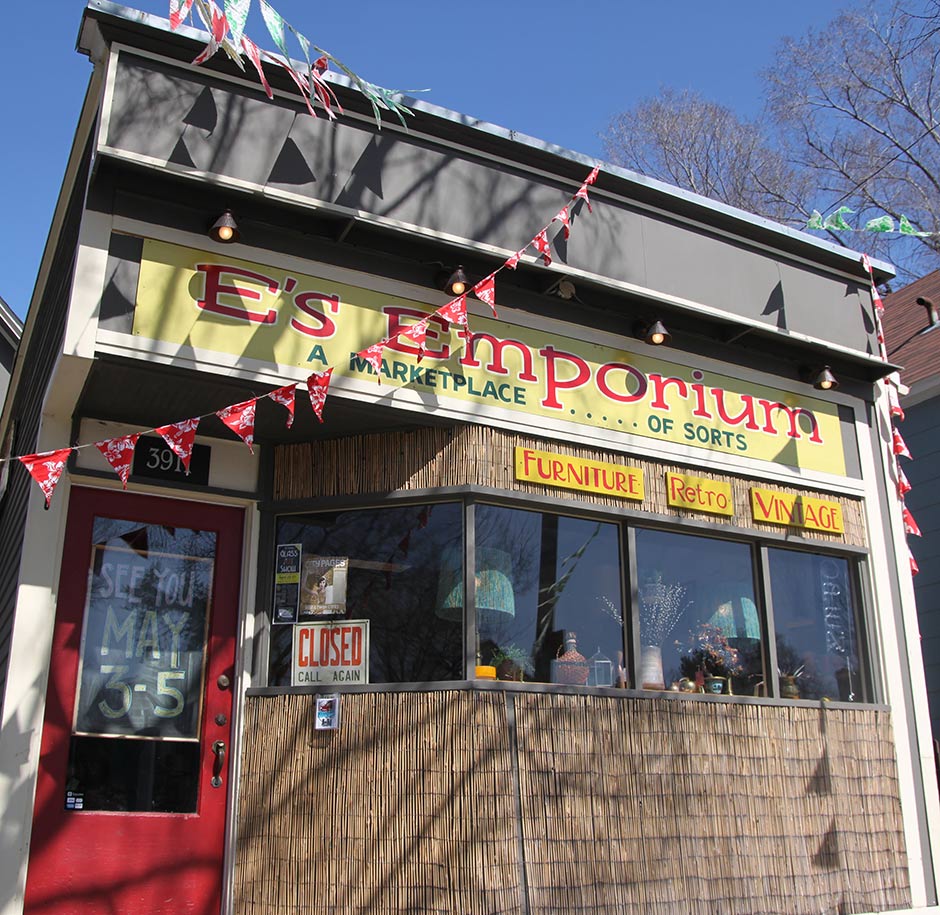 E’s Emporium is one of the many signs that Phil has painted for businesses along Minnehaha Avenue. His portfolio includes the signs for Junket, Amazing Things, and Moon Palace, among others.

Painting signs for small businesses is what Phil and Forrest love to do. Phil explained, “I was deeply affected by the hippie [culture], I still am. A lot of that was not hating society, but hating the industrialization, the pollution.” But, he had a daughter and had to find a way to make a living. So he began to use his work to help small business owners. “I find myself really supporting the system where before originally I spent my whole life escaping, but now I’m kind of almost looking at myself as holding the line in a way.”

“You have to buy the world you want to see, and we strongly believe in free market, but that’s not capitalism,” said Forrest. “We support free market, we aid in purchasing the world we want to see…. We want to see the world a fun, successful, happy, small business and family-oriented place, and we’re working hard on that versus just disliking things.”

Making a living as a sign painter can be done, but as Phil explains, he also considers it public art. “I always felt I never really got the real money for it [sign painting] that it’s actually worth,” he said. “If I came in and worked one week, it would be thousands of dollars.”

He continued, “So I always rationalized it this way – this is half my living, and half public art…. I am proud of the fact that all of these things are up, all of these pieces are up.”

“There’s a certain responsibility for sign painting that you come accept when you invest a lot of years in sign painting, which is that you’re often not working for success,” said Forrest. “You’re working for a dream to be successful.”

He added, “And when you accept that responsibility, it becomes really beautiful. Like [the shop] Dear Jupiter. A young mother with a small little vision to have a craft resource in the small town of Cambridge – Cambridge isn’t a small town, but there was no place for a person to go buy thread or any craft supplies without going directly to Walmart. So she had this small little vision she rents this small little storefront from her aunt, she pulls together $500, and I tell her this sign is going to cost $850 and she goes, ‘I have $500.’ And we say, ‘That’s fine, you’ve got to drop it off and pick it up.’ We basically give her store soul, for $500, so half of that wealth and value cannot be registered because of what we have done to help her have a place to fulfill her vision.” 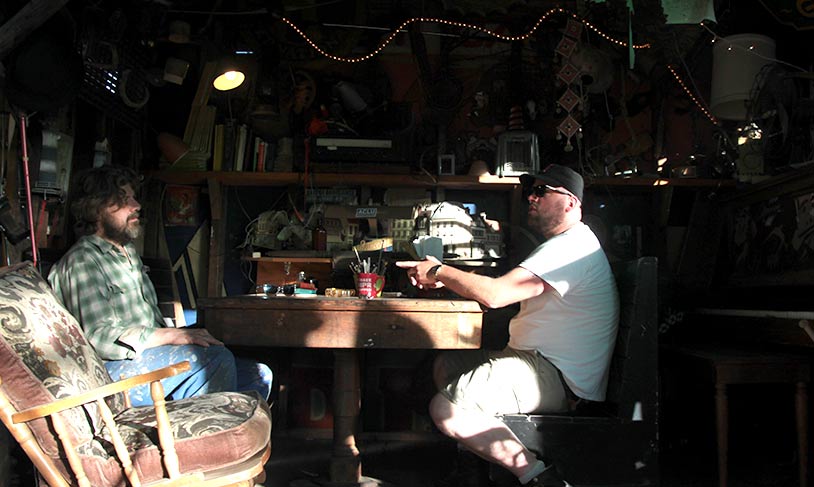 From left, Phil Vandervaart and Forrest Wozniak hang out in the studio space in Phil’s backyard. After so many years of working together, they finish each others’ sentences, and their stories are mostly punctuated by laughter.

The Salesman and the Oracle

Forrest started sign painting in Olympia, Washington with a folk art style that he described as “undereducated but charming.” He added, “It had a little soul.”

After moving back to Minneapolis, Forrest met an internationally-known metal sculptor with a studio near the Grain Belt Brewery who let him and his friends use the studio for painting. He recalled, “We were just these young punk kids, this guy is famous he has this studio … and we’re like ‘sweet, let us sign paint here,’ and we took all of his sculptures and stacked ‘em up in the corner. He’s world famous, and we just were like, ‘let’s scoot these out of the way,’ because we were so dumb…. I need to remember his name, he opened his doors to us, and that was priceless…and I want to give him credit for that.”

Forrest met Phil in the late 90s, and they hung out over coffee and the New York Times, but didn’t begin to work together until Forrest showed Phil a sign for the May Day Cafe that he was working on.

Forrest said, “I was showing Phil what I was doing, and he was like, ‘Well, that’s really ugly, bring it over and we’ll paint over it, and I’ll teach you a few things.’ So then we [Forrest and his friend Sven Lynch] brought it over and we had real sign painter hoedown where Phil really gave us some basic block letter tutorials. I consider the May Day sign the birth of our sign painting relationship.”

The two make a good pair. Forrest, by the way he describes it, can sell sand to the beach. Phil, with a background in drafting and a focus on design, was his mentor, the “oracle, the chief in the cave.” Forrest said, “We executed a really good product. So I was really then selling a good product. I was really coming through with my word. I was telling you I could paint you a really good sign, and I’d come to the oracle, the chief in the cave, and paint a really good sign.”

Forrest said, “That’s what I call him. So the birth was like I’m the salesman and he’s the chief, you know? And that was the birth of our relationship.” 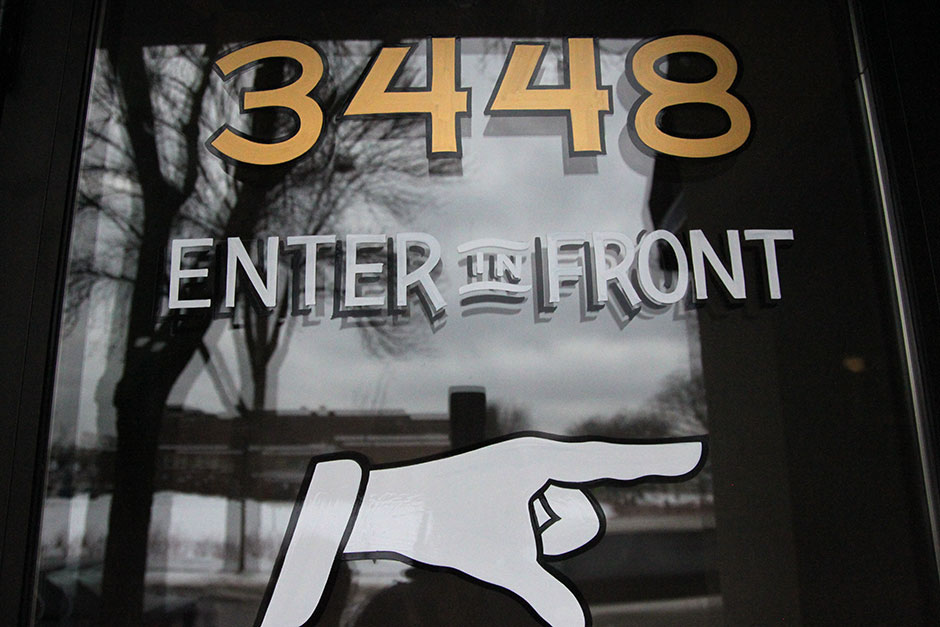 Forrest recently painted the signs on the Blue Door Longfellow. The primary Blue Door image was a rendering of the restaurant’s logo, but the sign on the side door that asked customers to “Enter in Front” was his own creation.

There’s always a lot of prep work to be done before painting can start. The two will power wash the surface to be painted and do any needed repairs, whether that is fixing the cement or stucco, installing a drip edge underneath the flashing or tuck-pointing brick and masonry.

Prepping the surface of the Fitzgerald Theater took a significant amount of work. Phil said, “When we did the Fitzgerald, that surface is actually the inside wall of the building that used to be next to it…”

“Yeah, it’s the inside brick of a torn down building,” said Forrest.

“And inside brick corrodes,” said Phil.

The two power washed the brick, cleaned it with TSP, sealed it, and fixed the brick that was crumbling off of the wall. They wanted to make sure the work lasted, because, as they said, they had to live with seeing it. “Every time I go over there I think, ‘oh, just one chip,’” said Phil. One chip, and Fitzgerald could lose his nose, a tooth, an eye.

Prepping the surface is one thing, breathing life into a work is a whole other skill. “It’s one thing to render something correctly, but then there’s this moment in which you capture it,” said Forrest. “Rendering a man and his face is one thing, capturing a personality, you know exactly when that happens. So you can render and you know it’s accurate and you know what you’re doing, and we’re pretty well versed in our trade so we know what we’re doing, but there’s a moment in which you capture his personality, and you know when that moment is. And we would be like, ‘Put the dot, the light of the eye, there.’ And Phil would be like – boop [with the paintbrush]. And then we’d get in the [lift] and be like – bssssp.”

Forrest continued, “And go all the way down, and then walk down to the street, walk over to the parking ramp, press eighth floor on the parking ramp – bsssp- , walk over, look through the fence, and say, ‘No, it’s got to be over two inches.’”

“Yeah, he looks cross eyed, move it over,” said Phil.

The up and down in the lift and elevator continued until they got the painting just to their liking.

What Keeps You Going?

With so many years of working on the craft of sign painting, I had one question: “What keeps you going?”

Phil answered, “Every job I do, I like to improve. I’ve recently been proud of the Amazing Things sign.” He added, “I could do whatever I want, because this guy trusts me. So I did this letter style, Tuscan, that we’ve been developing.”

Forrest responded, “So, you would say you’re constantly improving on design, because design is what keeps you going. You read these books, and they say you can’t design fonts for 25 years. You can finally, for the last 10 years, you are overqualified to design, which you don’t face until you’re 20 years in the game.”

Forrest responded, “I had no preexising qualifications to be a sign painter, it found me, and it helped me be of value and have value and purpose in my life. I owe it my life. I’ve got two beautiful daughters, I’ve got a beautiful wife, I own a home, I owe it. It saved me.”

The sign for the Trylon Microcinema is another one of Phil’s works.

Sign Painters is showing tonight and tomorrow at 7 and 9 p.m. at the Trylon Microcinema.

The Sign Painters book by Faythe Levine and Sam Macon is available at local bookstores and online.

See more of Phil and Forrest’s work online at