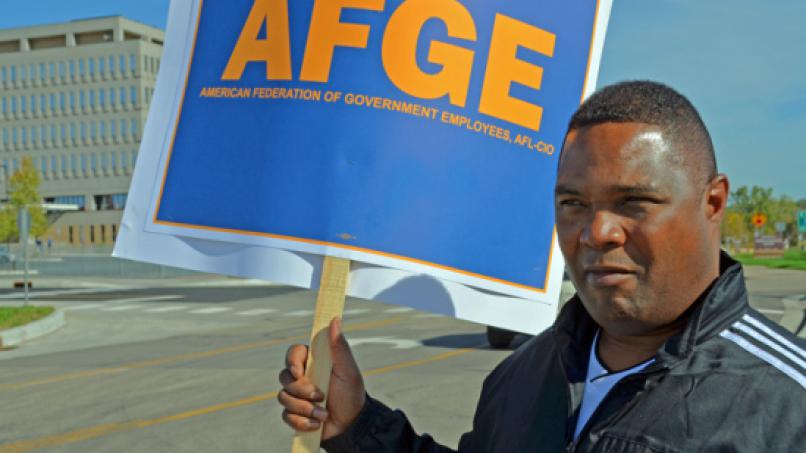 Stanley Walton, a locked-out member of AFGE Local 1969, joins a picket outside the Whipple Federal Building on Fort Snelling.

Is Stanley Walton’s work essential? That depends on whom you ask.

Walton was one of 7,000 “non-essential” employees furloughed by the U.S. Veterans Benefits Administration (VBA) Tuesday. He and about 150 others reported to the Whipple Federal Building at Fort Snelling, where they were handed letters instructing them to stay home until lawmakers in Washington had resolved the partial federal government shutdown that began Oct. 1.

Although the government considers Walton’s work non-essential, the homeless veterans who rely on him probably disagree. Walton says he connects “our most vulnerable veterans” with the housing, medical and other benefits they’ve earned as a result of their service.

That work doesn’t stop just because Congress can’t agree on a budget.

“It’s devastating,” said Walton, who served 25 years in the Army before taking a job with the VBA eight years ago. “I’ve received calls from veterans, and I have to let them know I can’t help you until the furlough is over.”

Others locked out today include workers who process appeals made by veterans claiming medical, job-preference or other benefits. These claims already can take more than a year to process, and the shutdown will only lengthen the amount of time veterans have to wait for a decision on their appeals.

The American Federation of Government Employees, a union of 670,000 federal employees nationwide, represents 208,000 workers with the Department of Veterans Affairs. Alma Lee, president of AFGE’s National VA Council, called the furlough a “lose-lose scenario for federal employees and the veterans we serve.”

“Veterans sacrificed greatly to earn their benefits, and we need to be on the job to deliver them,” Lee said. “VBA is already critically understaffed and the lockout is only making it worse. Our veterans deserve better from their elected leaders.”

A handful of AFGE members, supporters from other unions and veterans joined a picket line outside the Whipple Building today. They pinned responsibility on House Republicans, who are using the shutdown as leverage in budget negotiations, hoping President Obama and other Democrats will cave to their demands – like defunding the Affordable Care Act – in order to reopen the VBA and other government agencies.

“We went through this 20 years ago when the government shut down,” said Craig Maehling, a disabled veteran from Minneapolis. “It was wrong then, and it’s wrong now.”