An 81 year-old landlord thought his properties in Northeast Minneapolis were being shoveled. But the worker contracted for the job skipped out, says Dan Bauer, Minneapolis supervisor for sidewalk inspections, and the sidewalks remained uncleared. Worse yet, the complaints against his properties were piling up.

Sometimes, a snowy sidewalk is understandable. “It’s been the coldest and most difficult winter for shoveling,” say Bauer. More than 54 inches of snow have fallen this season, in fact. But under city ordinance, residents have 24 hours to shovel their sidewalks and commercial and apartment owners have only four daytime hours. If no action is taken to clear the sidewalks within those timeframes, that’s when the complaints and inspections start coming in. If a walkway remains obstructed, public works crews will clear the snow, billing the landowner for the service.

But under Minneapolis’s Sidewalk Snow and Ice Removal Pilot Program, in effect for Ward 1 in Northeast and Ward 10 in South Minneapolis, a private contractor now clears the snow, often at less of a cost to the owner and often quicker than public works crews.

The pilot is in its second full year of operation, currently running only in Wards 1 and 10 in Northeast and South Minneapolis, respectively. These wards were selected because their council members at the time, Kevin Reich for Northeast and Meg Tuthill for South, were supportive of the project.

The city has had its critics about snow clearing policies. In a recent article for the Southwest Journal, Don Ostrum, chair of the city’s Pedestrian Advisory Committee, says it wasn’t uncommon to see pedestrians climbing over snow piles at transit stops and street corners. Another committee member Scott Engel says that he hadn’t noticed any difference between the pilot project areas and the rest of the city. Both suggest that the city takeover sidewalk clearing duties completely.

Currently, it’s a lengthy process for the city if residents don’t shovel. First, the city must be notified via a 311 complaint. A sidewalk inspector will check for compliance at the property, and a warning letter will be sent if the sidewalks remain uncleared. Three days later a second inspection will be made.

Speed is the reason for the pilot program, says Larry Matsumoto, a paving engineer with the City of Minneapolis who is in charge of the pilot. Public works crews’ primary duty is snowplowing city streets. Sidewalk clearing often takes a backseat.

“When you have a winter like this one, clearing all the ice and snow off the streets doesn’t leave a lot of time for sidewalks,” he says. By hiring a contractor to do a sole service, there’s a much faster turnaround on sidewalks.

And it comes in cheaper, too, for the resident who gets billed for the snow removals. On average, a resident is charged $192 by the city for each removal. With the private contractor, who is selected on basis of a low bid, the tab is $125 for a non-corner property and $165 for a corner property. The contractor selected for this year was Sullivan Riehm Construction Services, LLC.

If an address receives additional complaints, the city will bypass the warning letter and send work orders out. The address, if they repeatedly fail to shovel, may also receive a $102 citation.

“Surprisingly, we don’t get a lot of repeat offenders,” says Matsumoto. He says that one concern is the abandoned houses in the city, because their bank-owners are often lacking when it comes to sidewalk maintenance.

As of March 24, 6,779 warning letters were mailed out to addresses in Minneapolis. That number is high for Minneapolis winters, which usually average around 5,000 complaints, Matsumoto said. Of those who didn’t shovel after a warning, 1,912 were sent work orders for snow removal. Though warmer weather may have helped clear paths this March, 750 of those work orders remain uncompleted by city crews in the non-pilot areas. 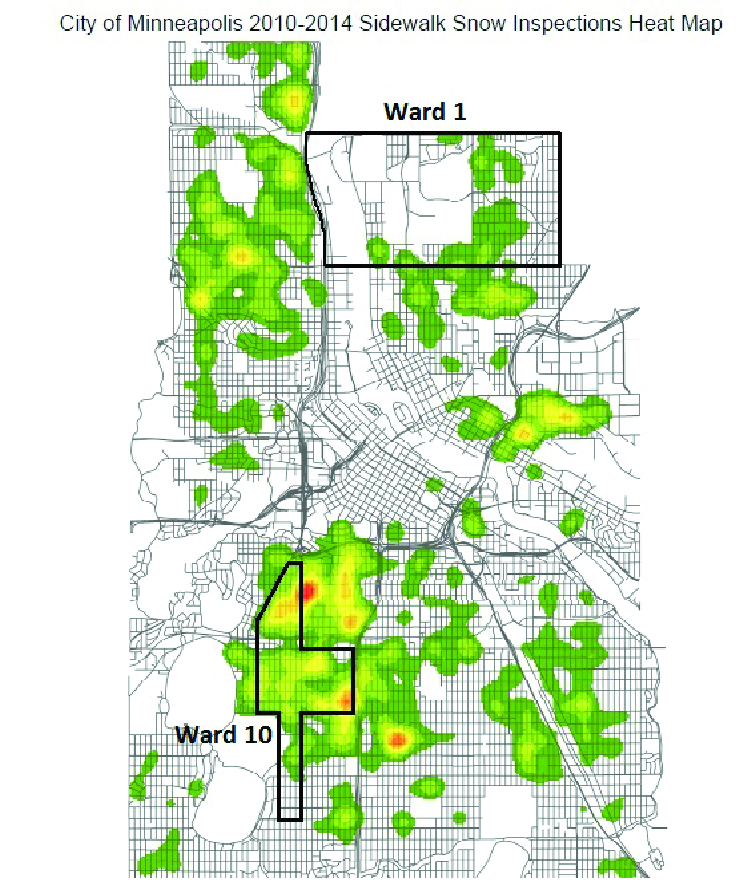 In this map provided by the City of Minneapolis (with outiines based on a Powerpoint presentation), the two “Snow and Ice Pilot” areas are shown. The South Minneapolis area, while it started in Ward 10, does not exactly follow the ward boundaries, and takes in additional area as well. The shadings show where complaints are registered about private parties’ failure to remove snow, with dark green being the lowest number of complaints, red the highest.

Matsumoto says there were no major differences in the obstructed sidewalks of either ward. The higher number of complaints in Ward 10 may instead reflect the population density of the Wedge and Hennepin-Lake neighborhoods. “We certainly wanted to

capture an area with traditionally more pedestrians,” he says.

The program’s future will be determined this spring after Matsumoto and others from the city analyze the program’s data. They will also examine the results from a pilot this

winter that used contractors to clear street corners—which he says are the city’s responsibility—around Bethune Community School. Expansion of both these programs is possible to include more high-pedestrian areas such as business districts.

Back in Ward 1, it’s a balmy late-March day. Sonja Davidson, 25, is walking her small, shivering dog, a chihuahua-greyhound mix. She said she hasn’t noticed much trouble with uncleared sidewalks in the area, adding that her landlord has been good with the snow so far. Another man who lives down the street is thinking about buying a snowblower with his partner because they “definitely fell behind shoveling and deicing this winter.” And another neighbor said this is by far the coldest winter he’s ever seen, definitely the worst for shoveling.

At least it’s almost over.