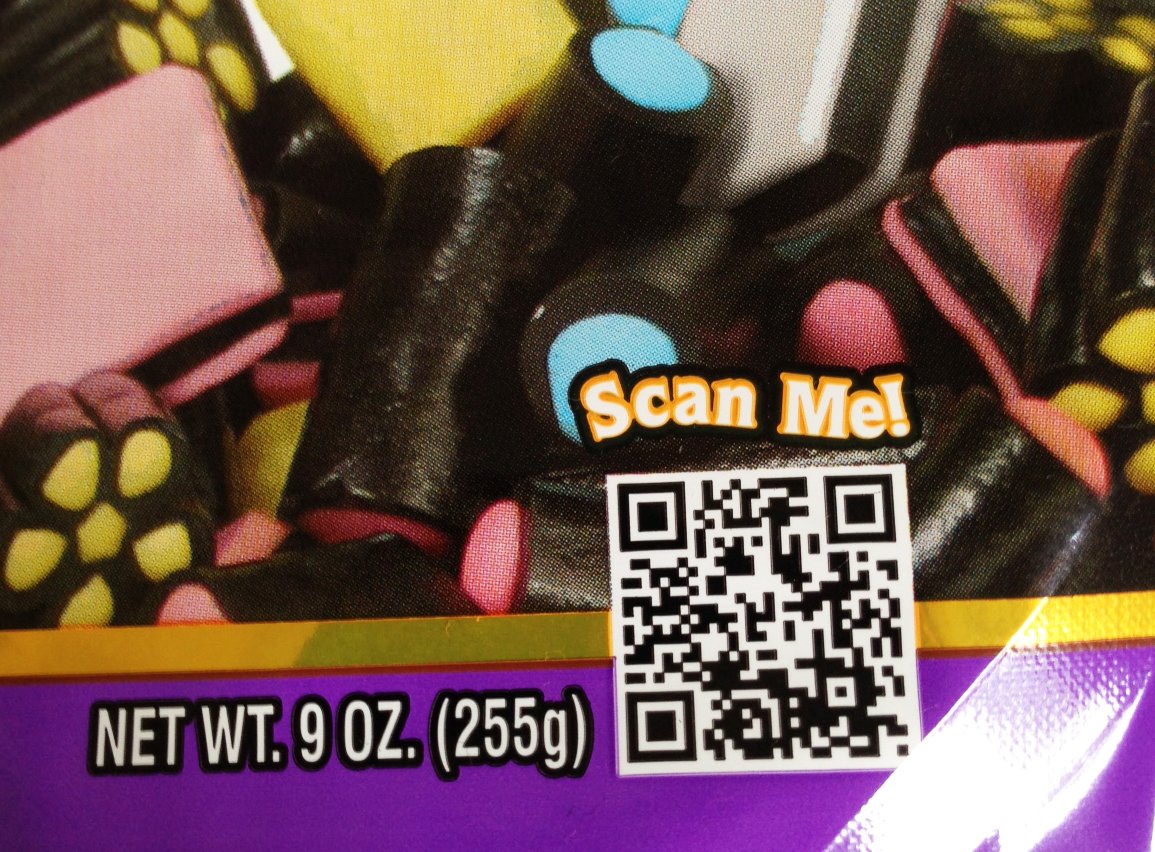 “What do you think about QR codes?”

Asked that question during my remarks on social media at the annual meeting of the College Music Tour Managers Association, I immediately replied, “I hate ’em.”

I have a more complete response—but first, for those who don’t know, I should explain what a QR code is. A QR code is a pattern of black and white dots, such as that seen above on a package of licorice. When you open a QR reader app on your smartphone (many are available for free, though you’re often made to see ads during use) and point your phone’s camera at a QR code, you’re typically taken to a website URL encoded in the pattern. QR codes can also be used to store numbers and other simple information, but most typically they’re used to direct viewers to a website linked to a given product or service.

When I said QR codes were “dorky,” I meant that in my experience, they’re often used by people who don’t seem to understand how the Internet is typically used—people who feel they need to use a QR code to appear “with it” or “high tech.” In reality, though, I think that when used for PR purposes they’re ugly, unimpressive, and rarely used.

Supporting my hunch, one of the conference participants asked his peers to raise their hands if they’d ever scanned a QR code. About 80% of the people in attendance put their hands up. “Now,” he continued, “how many of you have scanned a QR code recently?” Almost every hand went down.

I’m guessing those conference participants have had the same experiences I’ve had: when you take the trouble to scan a QR code, you’re taking a chance because you generally don’t know where precisely it’s going to take you. (QR codes are increasingly used for non-PR applications, and that’s a different story—some gamers use them to share game codes, and you might have seen a QR code on a ticket to an event, allowing venue staff to scan your ticket and make sure it hasn’t been used twice.) Usually, a QR code will take you to the most obvious place: the product’s home page. If I wanted to go there, I would have Googled it—a QR code doesn’t make me any more likely to visit a product’s site, or like it on Facebook, or follow it on Twitter. Sometimes I’ve been outright burned, as when I scanned the code on a bottle of dish soap and learned that it wasn’t there for consumers at all: it was a numeric code, meaningless to me, used by the manufacturer to track packing and shipping.

One of the conference attendees pointed out that he likes to use QR codes when he’s advertising his ensemble in a very limited space—for example, in a concert program. That makes some sense, but I still wouldn’t just slap a QR code on a product or advertisement unless I had a good reason to.

I was mulling all this over last night as I snacked on some licorice allsorts from Wiley Wallaby. (Billed as “Australian-style,” they’re actually made in Perham, Minnesota.) A QR code appears prominently on the front of the package, under the invitation, “Scan Me!” So I did. Where did the QR code take me? To wileywallaby.info—a website that’s nonfunctional, since Wiley Wallaby actually resides online at wileywallaby.com. The package designers, it seems, didn’t even bother to double-check whether their QR code worked—they just stuck it on there. I wonder if anyone else even noticed.

Learn more about social media and small business promotion at our September Social Media Clinic with Jay Gabler on September 26. All our other upcoming media skills classes are featured on our classes page. Have a question for our geeks? Send it to jay@tcdailyplanet.net, or leave your question as a comment below.