The Community Transformation Grant (CTG) program was initiated in 2011 by the Centers for Disease Control and Prevention (CDC) in an attempt to address health disparities, help control health care spending, and create a healthier future. To this end, federal funds from the Affordable Care Act were allocated to select communities across the U.S. to help support community-level efforts to reduce chronic diseases by expanding efforts in “tobacco-free living, active living and healthy eating, and quality clinical and other preventative services.” Minnesota fared well in the selection process: the state was awarded $4.7 million per year (including $1.1 million for Hennepin County) for what was supposed to be a five-year program.

Congress, however, decided to eliminate funding for the CTG after year three – a move Martha Roberts of the Minnesota Department of Health (MDH) characterizes as a “terrible blow to Minnesota.”

According to Roberts, who oversees the implementation of the CTG for the MDH, CTG funding in Minnesota was specifically dedicated to addressing health inequities in northern rural Minnesota communities, which are home to some of the worst socio-economic conditions and health outcomes in the state. She notes that northern Minnesota has “higher poverty rates, more children living in poverty and receiving free-and-reduced lunch, more residents being served by the Supplemental Nutrition Assistance Program (SNAP), higher rates of tobacco use among youth and greater mortality from heart disease and stroke.” Roberts also points out that northern Minnesota has a significant Native American population – a group facing some of the worst health disparities and inequities in the state, including high rates of smoking, infant mortality, suicide, obesity, and diabetes incidence.

The five northern communities granted CTG funding were already participants in the Statewide Health Improvement Program (SHIP), a prevention program aimed at addressing preventable causes of illness and death, such as tobacco use/exposure, physical inactivity, and poor nutrition. Since the CTG has a similar mandate, using SHIP’s existing structure and capacity to implement the funds was seen as the best way to maximize them. The factors which indicated an elevated need for CTG funding included poverty, smoking and obesity rates, chronic disease burden (including mental health), and poor county health rankings. 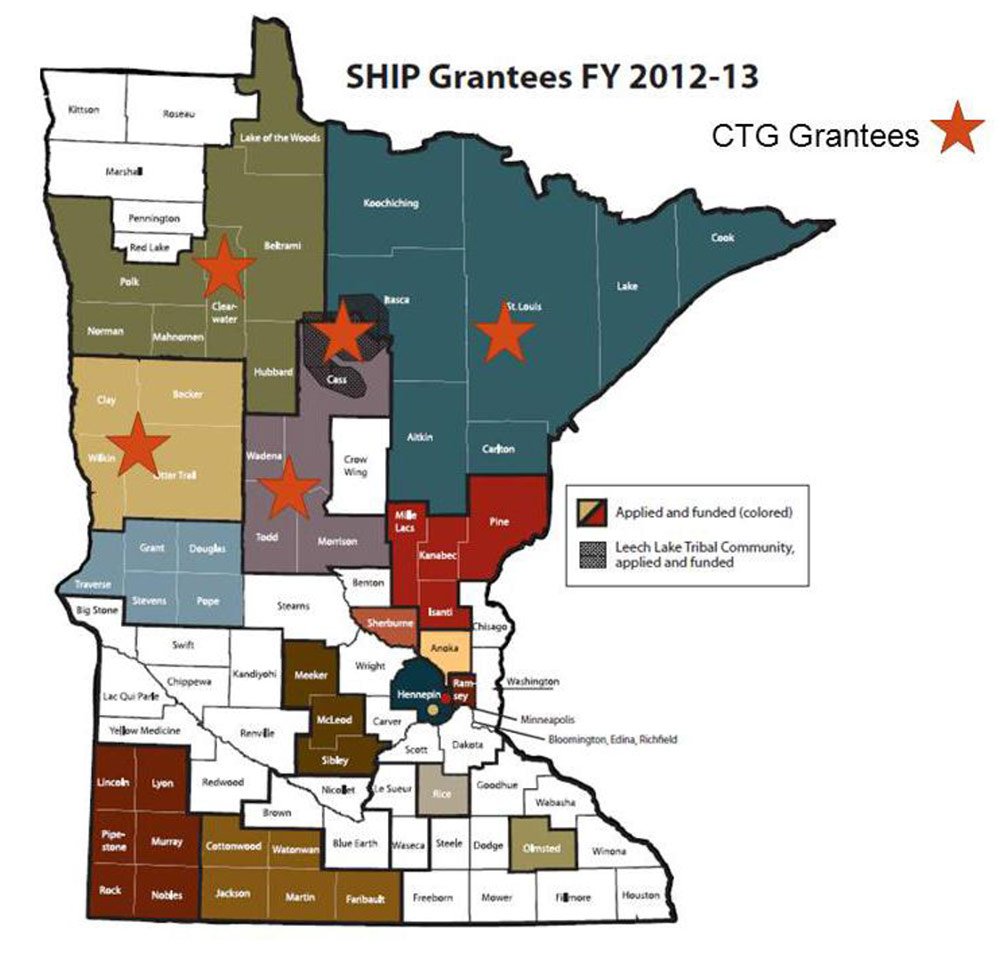 Within these communities, Roberts says CTG funding has been focused on “creating healthy and safe physical environments that promote good health for all and improve community health by reducing obesity and overweight and tobacco use and exposure, with the goal to reduce key risk factors of hypertension and high cholesterol.” An array of community-led initiatives have been executed under the auspices of the program, geared toward healthy eating in schools and hospitals, active living, tobacco cessation, and the strengthening of community-clinic linkages. The CTG in Minnesota was also designed to operate at the regional and state levels, and has funded a variety of larger-scale initiatives aimed at chronic disease prevention, including the development of a Minnesota Food Charter.

According to Roberts, many of these efforts have seen success, and CTG funding in Minnesota has been “making great strides in engaging a broad range of partners statewide to take action to improve community health. In combination with the Minnesota SHIP, CTG is providing vital resources to rural northern Minnesota, where some of our greatest social and health challenges exist.”

This makes the loss of CTG funding all the more striking – especially given the MDH’s recent emphasis on the importance of confronting Minnesota’s significant health disparities (and the accompanying assertion that structural racism has played an integral role in their persistence). Since the CTG was designed to enable “communities to implement broad, sustainable strategies that will reduce health disparities and expand clinical and community preventive services,” it ostensibly offered a path toward greater health equity in the state.

Roberts emphasizes the importance of community-led health initiatives to any strategy aimed at reducing health disparities:

“There is no better way to improve health than to build the capacity of communities to engage their citizens in identifying the challenges they face and defining the actions they can take collectively to improve the well-being and health of their own communities. Combine this with regional and state-level public health improvement action strategies, and you can develop a highly effective and systematic way to improve the health of the entire state of Minnesota.”

Without CTG funding, Roberts says local health departments and tribes will face significant challenges in undertaking their community health work. Ultimately, she notes that “the loss of CTG funding is a tremendous loss for Minnesota and especially for the people living in rural communities in northern Minnesota, who clearly do not have the same opportunities or access to resources that can help them thrive and live in health.”

Both the MDH and the CDC were caught off guard by the CTG cut, for which Congress has offered no explanation. Congress did increase CDC funding for diabetes, heart disease, and stroke prevention programs, and also created a new grant program to support community coalitions in their efforts to prevent chronic disease, but disrupting the CTG mid-stream compromises the gains that have been made in northern Minnesota as a result of the program.

Roberts suspects the decision may be related to the desire to see funding produce rapid, targeted health improvements that are easily quantifiable – a challenge for prevention efforts that address the key factors that cause disease within communities. She situates the cut within a broader pattern of behavior with highly negative implications:

“Congress’ increased practice of starting and then unexpectedly stopping federally funded programs not only wastes a tremendous amount of work and resources, but ultimately interrupts crucial community health efforts, as well as Minnesota’s overall ability to make progress on reducing health disparities and inequities in rural parts of the state. And growing inequities are one of the most serious long term threats to Minnesota’s economy and to the social well-being and health of our families and communities.”

The elimination of CTG funding will result in a total loss in community health funding of about $7.2 million through September 2016. The funding also supported 32 jobs in the state – 13 at MDH and the rest held by grantees and contractors serving northern Minnesota.

At present, the MDH is assessing the extent to which it might be able to salvage the CTG program work and evaluation efforts through a contingency plan that would leverage other resources.