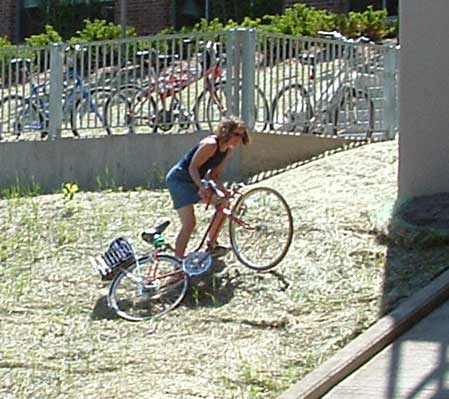 Bicyclist struggles to find a place to park her bike.

More and more people are bicycling this summer. The rising cost of gasoline, greater awareness of global warming and cool, sunny weather has contributed to the increase in bicycling. Minneapolis, however is not keeping up with the demand for bicycle parking. On new projects, such as the new downtown library, only a bare minimum of racks are being installed.

We were shocked to find that there was only a single bike hitch. There were dozens of bicycles locked to trees, railings and to one another. You can see pictures of the mess here. If the lack of bike racks wasn’t bad enough, the area was dusty and there was no signs explaining how to get to the Midtown Exchange. We had to walk through a construction area, step over a plastic fence and walk completely around the new hotel that did not permit access from the Greenway.

As we trudged across the large, asphalt parking lot, we couldn’t help notice that there was every concern for motorists; plenty of parking spaces and signs, yet the parking lot was not filled. Why was this publicly financed project allowed to disregard its own goal to discourage motorized traffic?

We asked a representative of the developer why there was such a disregard for the needs of bicyclists and he said it was the city’s responsibility to provide bicycle parking.

Many bicyclists have complained about the lack of parking at the Midtown Exchange and the Midtown Greenway Coalition is doing its best to encourage the city to install adequate bike parking on the Greenway.

I biked past the Midtown Exchange a few days ago and the parking situation remains the same.