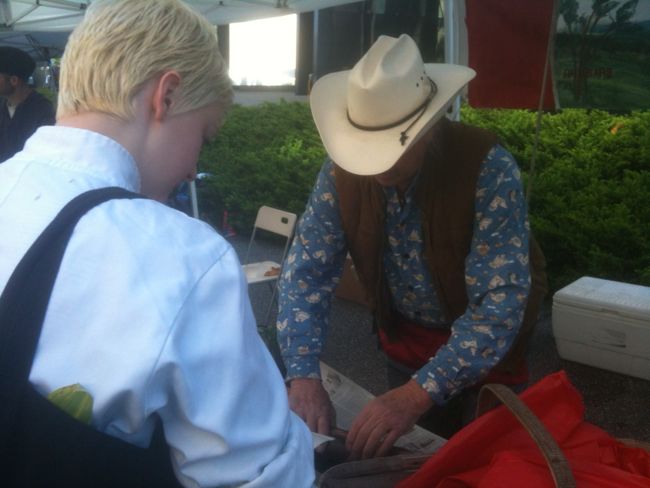 My favorite time of year has arrived – farmers market season. Pretty soon, Carol and I will start our weekly ritual of Sunday bike rides to the Kingfield Market, and frequent visits to the Uptown Market and Midtown Farmers Market. And this year, our market calendar is going to get a bit more crowded, with the opening of the new Linden Hills Farmers Market on June 3.

Last Saturday, I met up Sea Change chef Jamie Malone for opening day at the Mill City Farmers Market, which is conveniently located just outside her restaurant’s front door. Jamie plans to go shopping every Saturday during the season at the MCFMt, looking for ingredients and inspiration for Sea Change’s new weekly four-course, prix-fixe ($39) market menu.

The idea of the chef going to the market early in the morning for the best and freshest ingredients for the evening’s menu is a charming one, and I have occasionally run into chefs at farmers markets — including Brenda Langton, (who played a big role in founding the Mill City Market), and Shelagh Connelly who shopped for last fall’s Daily Planet Pick of the Market dinner at the St. Paul Farmers Market.

But as a practical matter, shopping at farmers markets isn’t really a very efficient or reliable way for chefs to get the ingredients they need. Jamie Malone gets much of her produce from Dragsmith Farms, delivered to her door. So the morning outing was more of a way to make contacts with producers who might become suppliers in the future.

Our first stop was at the Women’s Environmental Institute, which grows a lot of organic vegetables at their farm near North Branch. They were sold out of almost everything except some bedding cards, so Jamie just collected some information for future use. At Prairie Hollow Farm’s stand, she bought up the last of the wild ramps, which she may use to make a ramp kimchi, and some nettles, which will likely make an appearance in a nettle soup with ricotta dumplings. Last stop was Schultz Farms, where proprietor Paul Schultz sold her a couple of bundles of rhubarb.

Who knew there were 55 different things you can do with rhubarb? Actually, Jamie Malone knows. She uses rhubarb in a Sea Change dinner entree of chicken with buckwheat and pickled rhubarb, and she predicts that rhubarb will also make an appearance in pastry chef Niki Francioli’s dessert for this week’s farmers market menu. Other courses are likely to feature razor clams, lentil broth with ricotta dumplings, and New Zealand tai snapper.

The Mill City Farmers Market is open Saturdays from 8 a.m. to 1 p.m., through October 27.