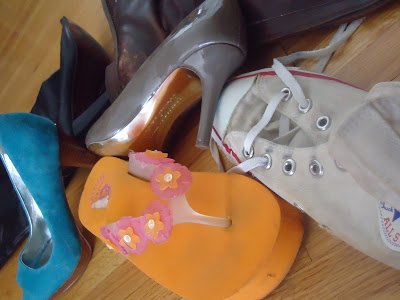 So Sarah Jessica Parker is having foot problems. Spending 18-hour days in five-inch Manolo Blahniks during Sex and the City wasn’t the problem. No, what really hurt SJP was a more recent movie shoot that had her donning cheap footwear. Realistically, explained SJP, my character wouldn’t have worn really good (a.k.a. expensive) shoes. Apparently reality matters when it comes to wardrobe selection and compelling character development.

As a life long shoe lover and SJP fan, I can tell you this much. I grew up believing that she who dies with the most shoes wins. I stopped counting the members of my collection when they reached 120 pairs several years (decades) ago. T occasionally tries to intervene and wants me to enact some sort of weird “one pair comes in, one pair goes out” ritual. T owns about four pairs and all are sensible. He obviously doesn’t understand the “more is better” concept. Or that shoes are like dating in your twenties: the ones we are most attracted to cause the most pain.

Not having SJP’s shoe budget, most of mine are purchased on sale. Take for example the turquoise peep toes I bought for the Swedish Royalty visit last October. They were $100 on sale for $30. Knowing I’d be wearing them for an entire afternoon and evening, the shoe monger offered to stretch them, then suggested I wear them two hours each night before the event to “break them in,” as if shoes are wild horses that need taming. It is more factual that my Fred Flinstones are the animals being broken in. Each little flesh-brick is as wide as it is long and pushing them into a slim pump isn’t pleasant.

The night of the royal visit I spent four hours standing and running on the cement floor of the hotel lobby. My feet were numb (I mean, really really numb. Like I-kept-checking-to-make-sure-they-were-still-attached numb.) but there was no blood. If there had been it would have pooled under my arches and eventually spilled out of the cute peep toes. Rather, the shoes molded to my feet, became one with my body, embedded themselves into my skin, and sunk into bones; the shoes became a parasite that refused to dislodge. At home T assisted with the excavation and we watched my feet contort with relief as uncontrollable spasms flexed my toes into fists.

I bought the black knee-high boots with the four-inch heels and chain anklets at a second-hand store. They were in perfect condition and fit like the cobbler used me as a model. Best, they felt great! Until I wore them. The last time I had them on was at a funeral. It didn’t occur to me that the popularity of the deceased would mean there was standing room only, and an hour into Mass I was ready to pass out from the pain shooting down my toes and up my calves. But those boots are adorable, and I am not ready to bury them just yet. We’ll have another outing together. Someday.

Not all high-heels are painful. My gold-toe stadium pumps are comfortable, but so wide that I walk right out of them. To keep them on I have to clench my feet into balls. And not all painful shoes are heels. The high-top Chucks rub the skin off my ankles. The antique hiking boots give me blisters everywhere. And the orange and pink flip-flops produce stigmata in each foot after only five minutes of wear. When the shoe doesn’t cause pain, other misfortunes often do. When accidents happen to good shoes do we mourn our health or the shoe? This is heady stuff for a show lover who knows the misery of stepping on a nail that pierces both a favorite shoe and the wearer’s foot.

I don’t know if SJP ever stepped on a nail that stabbed her Choos and impaled her foot. If she had she probably blamed the shoe. Over here in the off-the-rack sales aisle we have a saying: shoes don’t hurt people – feet hurt people.