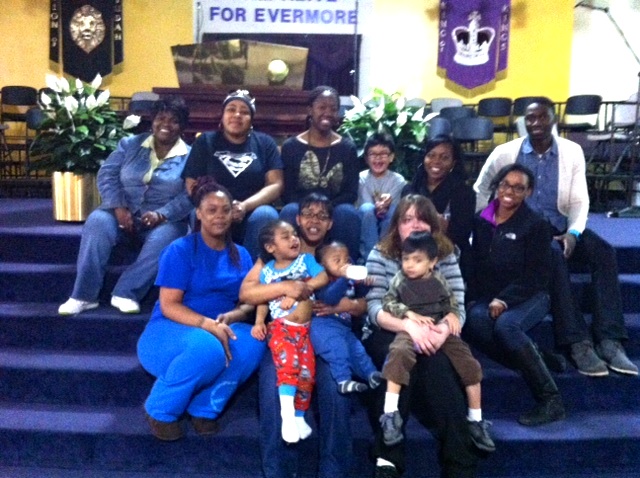 Blow-up mattresses and baby cribs might not seem like church supplies, but they’re part of the mission for Shiloh Temple International Ministries, located at West Broadway and Fremont Avenue in North Minneapolis. Shiloh Temple is one of 43 congregations that take turns hosting homeless families on a one to two week rotation at least once a year. Churches provide sleeping quarters in Sunday School classrooms and other open spaces, with volunteers sharing room set up, shopping and food prep. Some volunteers even stay at the site location overnight with guests.

Families Moving Forward (FMF), which has served the Twin-Cities homeless community for more than 20 years, directs the program. Now part of Beacon Interfaith Housing Collaborative (formerly Portico), the program is a national model for providing shelter to the homeless. FMF serves eight families in all, with most referrals coming from Hennepin County.

“It’s like a home away from home,” said FMF Volunteer Coordinator and Congregational Liaison Peter Arneson. The FMF hub at 1808 Emerson Ave. in North Minneapolis offers laundry machines, showers, a kitchen, a play room. “Everything except for the bedroom which the churches provide,” he said. Most congregations commit to host four families at a time, or approximately 16 people.

Family advocates at the FMF office coordinate services, working closely with families to find housing and employment, provide computer stations, and even communicate with school district liaisons. It is also where families receive transportation to the church sites in the evenings and where school buses pick up children who need transportation to school in the mornings.

“The family advocate is the point person,” said Arneson. “They make sure there is no duplication of services or something is left undone.” FMF also provides classes for financial literacy, stress management, parenting skills, and even budgeting.

The Beacon team hasn’t had to do much in the way of recruiting churches. “Congregations often come to us,” said Arneson. “They hear about our program and after they’ve expressed interest, all we have to do is follow up.”

Shiloh Temple hosted FMF guests the week of March 17-23. This is Shiloh’s second experience. “Bishop [Richard] Howell wanted to be involved and so he pulled together a team from the church,” said volunteer Asia Smith. “After the training on the organization’s mission and goals, I started to see displaced families as families. Homelessness is affecting families…moms, dads, and children.”

The partnership with Shiloh developed out of an effort to reach out to their North Minneapolis neighbors. Parkway United Methodist at Lowry and Washburn Avenues is another church partner in the area.

The church offers more than just shelters to these families. For many of the volunteers, it’s about sharing Christ’s love with others. “Christ was a servant and He was in the community,” said Smith. “I’ve been given the opportunity to be a servant following the model of Christ.”

Yolanda Hyatt was once a FMF guest herself, and now she volunteers on Shiloh’s outreach team. “Shiloh was the last church we stayed at,” she recalls. “It was the spirit of the people. I call it a big small church. The Bishop is so generous and giving and hands-on…. They really went above and beyond.” After joining the church, it was only natural that Hyatt be part of this ministry. “What greater testament to the will of God but for them to see someone…if He’ll do it for me, He’ll do it for you,” she says.

“We hold trainings for the congregations and we try to get [volunteers] out of mindset that ‘I’m here to help,’” Arneson explains. “It can be hard to be a gracious host, but they soon realize that it’s not about me as a volunteer but about this person. How can I meet the real need now, not what I think they need.”

“These people are hurting. We’re here to give sanctuary, so we have to be of the right spirit and mind,” said Hyatt.

The mostly young adult volunteers at Shiloh struggled the first time they hosted families. With her unique perspective, Hyatt helped to bridge that gap. “I wanted to bring a different dynamic – to help volunteers understand that people are mad about a situation they are unable to change. I wanted to step back, guide, and let them learn and serve,” she said.

Hyatt said that the real work is about changing peoples’ mindset about their situations. “It’s about broadening their perspective on what they can do. There is light at the end of the tunnel. Everyone is at a different place in life. I can see both sides. I just wanted to be there for the families.”

Michelle Henry is an FMF guest with three children – ages six, three, and one on the way. She got connected to FMF because other shelters in the area were booked. Shiloh is their third church. “We switch every Sunday,” she said.

Unlike many other organizations, FMF also serves non-residents. Henry’s situation fits this profile. At the time of the interview, she and her children had been in Minneapolis for 11 days. “We’re new in town and the [county] can’t help because we haven’t been residents for 30 days,” she explained. Although 50-75 percent of guests are from Hennepin County, FMF will accommodate non-residents who may be turned away from county shelters.

Originally from Amarillo, TX, Henry moved to Duluth, MN with her children’s father because his mother is dying of cancer. He is working, but it’s not enough. Despite her CNA (Certified Nursing Assistant) license, the only job Henry had been able to find was an on-call position one day a week. She decided to move to the Twin Cities in hopes for better job prospects. “This is a new situation for us,” she said. “[But] how were we supposed to know that his Mom would get cancer?”

Arneson described the plight of homelessness as a progression. “It’s not one kind of person or one specific thing; a mixture of things can happen,” he said. Although programs with services such as Beacon’s FMF are encouraging, the problem of homelessness has grown. According to the MN Coalition for the Homeless website, 13,100 Minnesotans are homeless on any given night.

“You’d be surprised at the comforts you miss when you don’t have your own place,” said Hyatt. “A bed, a lamp, peace of mind…and they don’t get much alone time.”

Henry has endured all of the hardships of being dependent on others for food and shelter. “At first I felt like families didn’t like me,” she said. “We had different parenting styles. Then one day I spoke up.”

Henry began getting along with one mother in particular, based on commonalities. “We found out we both have kids with disabilities…we have the same frustrations.” Her older son is now enrolled at Anishinabe Academy, a school choice his father was happy with because of his Native American heritage. “It’s hard; no job, no housing…the stress…kids…living with people you don’t know,” Henry explained. “[But] it’s great here at Shiloh and the food is really good. Every church is different, but we are grateful.”