Shhhh. There is a very good, somewhat quirky new restaurant on the ground floor of the Accenture Tower in downtown Minneapolis.

It’s called Mona. But I don’t think anybody is supposed to know about it.

There is no signage outside the building to indicate that there is an eating establishment inside, and even once you enter the building at 333 S. 7th, it’s easy to overlook.

The strategy of secrecy seems to be working, at least in the evenings. On each of my two recent dinner visits, there was one party in the dining room, and one party dining in the bar area, plus one / a few people having drinks at the bar. 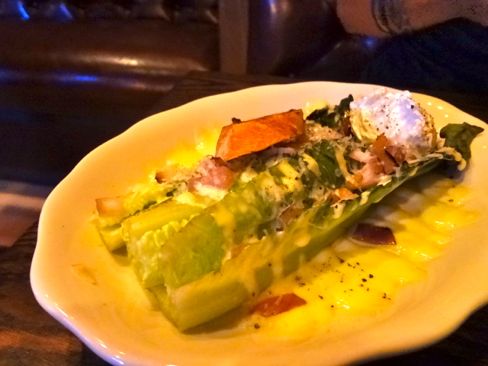 t’s a shame, because the food is actually very good. Owner and executive chef Lisa Hanson went to the prestigious Culinary Institute of America, and was previously chef de cuisine at the Corner Table.  Their list of over 20 local farms and purveyors on the back of their dinner menu shows an impressive commitment to buying locally: everybody from Hidden Stream Farm in Elgin (pork) to Au Bon Canard in Caledonia and Fulton Brewery in Minneapolis.

On our first visit, we ordered a couple of plates apiece : a lovely small grilled Caesar salad with poached egg ($5); a plate of shrimp in a dill mayo; poached shrimp on brioche in a creamy dill dressing ($7), house-made papardelle with walnuts and a sweet corn cream ($8); white grits with okra, roasted garlic, grilled corn, cotija cheese and red pepper sauce ($7) and a little tartlet of puff pastry filled with tomatoes and Gruyere ($6). It wasn’t a lot of food, but we weren’t very hungry, so it felt about right. The dinner menu consists of small plates, which can add up to a rather pricey meal, but doesn’t have to.  Chef Hanson was out with an injury on the nights that we visited, but that doesn’t seem to have affected the quality of the cuisine, which was high. 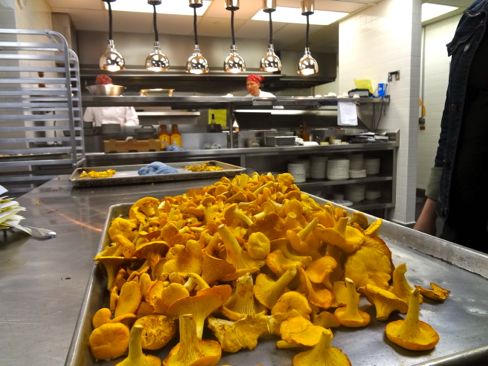 On a return visit, things got a bit quirkier. Sitting in the dining room, Carol spotted a huge mountain of chanterelles sitting on a tray in the open kitchen. I asked about them and was told that their forager, Fred, had brought them in that day. Can I order them in a dish? A guy who seemed to be the manager thought for a minute and then told me that they could be incorporated into either the grilled vegetables ($6), or the breast of duck ($14) with foie gras corn custard and sauteed wild mushrooms. I ordered the grilled vegetables with chanterelles, and returned to the table.

A few minutes later, the manager returned to inform me that because the chanterelles were very expensive – $40 an ounce — there would have to be un upcharge on the grilled vegetables.

If you check chanterelle prices on the web, it sure looks like Fred is making out like a bandit. Either that, or the manager was mistaken.

I never did find out how much grilled vegetables with chanterelles would cost, but when the manager assured me that there would be no upcharge on the breast of duck with chanterelles ($14), I ordered that dish instead. 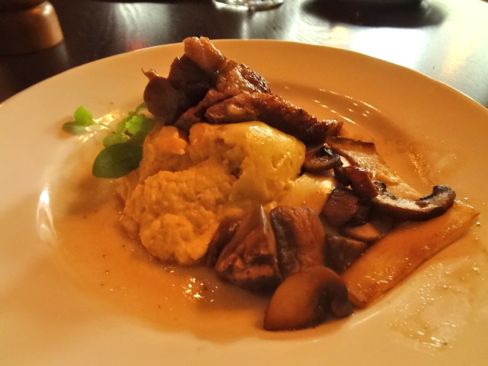 A few minutes later, my little plate of breast of duck arrived, accompanied by a light custard that had no detectable trace of foie gras; and a few sauteed mushrooms, most of which looked like crimini. Which of course aren’t wild mushrooms at all, but just a darker strain of the common supermarket button mushroom.

“Criminy!” I thought to myself. I called this to our server’s attention, explaining that I had expressly asked for chanterelles. (And in clear earshot of the cooks in the open kitchen.)

“That’s a chanterelle,” she said (or words to that effect), pointing at one mushroom on my plate that didn’t look like most of the others, but plainly was not a chanterelle.

A few minutes later, she returned with a plate bearing half a dozen sauteed golden chanterelles, which didn’t look at all like the fungi on my plate.

Well. all’s well that ends well. The rare breast of duck was firm and flavorful, and although the flavor of foie gras in the foie gras corn custard was either extremely subtle or just plain non-existent, it was a petite but satisfying dish. Carol also enjoyed her plate of Arctic char, pan-braised with mushrooms (also not chanterelles) served in a pancetta-basil sauce, (prepared, at her request without the pancetta, $11).

Service was a bit quirky, too. At some points, we were served by the bartender, who abandoned his post in the adjoining bar, and at other points, but a friendly young server. Her habit of putting her arm on my shoulder seemed rather familiar, but I didn’t mind — in fact, I considered asking her for a date, but Carol was sitting right next to me, and she isn’t very open-minded about that sort of thing. 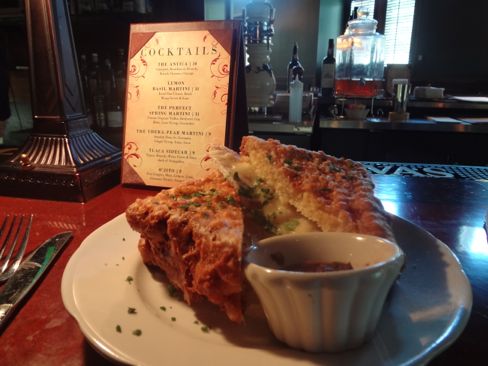 After delivering our dessert, the voluble bartender passed by our table with a plate of moon pies – tasty little fried balls with a chocolate cream filling ($5). Carol said something to him in jest along the lines of “you get an order, and we’ll share” — and the bartender did just that — brought a plate of moonpies to our table, then stuck a fork in one of them, and popped it in his mouth. Like I said, quirky.

I did make it to Mona for one lunchtime visit. The lunch menu offers many of the same items available in the evening, plus several sandwiches, including a lamb burger ($7/$11.50), a vegetable sandwich ($6/$8.50), and a BLT ($7/$10). The second price next to those lunch items reflects is for a larger portion; according to the bartender who served me lunch, when the restaurant opened, customers complained about the small portions, so they added some portion-and-a-half options to the lunch menu. I ordered the Monte Cristo sandwich, though, ($8/$11) and found the smaller portion more than ample — sliced turkey and provolone in a brioche bread sandwich, dipped in an eggy batter and deep-fried. Very rich and a bit oily, but satisfying, though I didn’t taste much for the smoked cherry sauce that accompanied it.

The Happy Hour menu, available Monday to Friday from 3 to 7 p.m. offers a buck off on tap beers and wines by the glass, plus snack items such as popcorn ($2), deviled eggs ($3) and smoked fish ($5). Free validated parking is available in the underground garage after 4 p.m.