Only a year ago, Rhonda Walker was a self-described depressed and overweight widow who never thought about riding a bike.

For her 50th birthday, she bought herself one. And now, before even 8 a.m. this past Wednesday, the 51-year-old had already pounded out six-plus miles as one of a group ride’s most exuberant participants.

Walker, who lives in Minneapolis, joined close to two dozen kindred spirits for the inaugural Women’s Wednesday ride, a new feature of the third annual Twin Cities Bike Walk Week. The morning ride, and a special-edition evening Greenway safety patrol, were intended to celebrate women who already commute by bicycle and encourage others to try it out, Amber Collett of Transit for Livable Communities said.

The 2009 Bike Walk Count found that only 23 percent of Twin Cities cyclists are women. Group rides like Wednesday’s are one way cycling advocates hope to bring equity the the road.

The morning’s riders, many of whom wore red as a nod to promoting heart health, met at 7 a.m. at the Dunn Brothers at 4648 East Lake Street. The ride started promptly, as many of the women had to get to work. 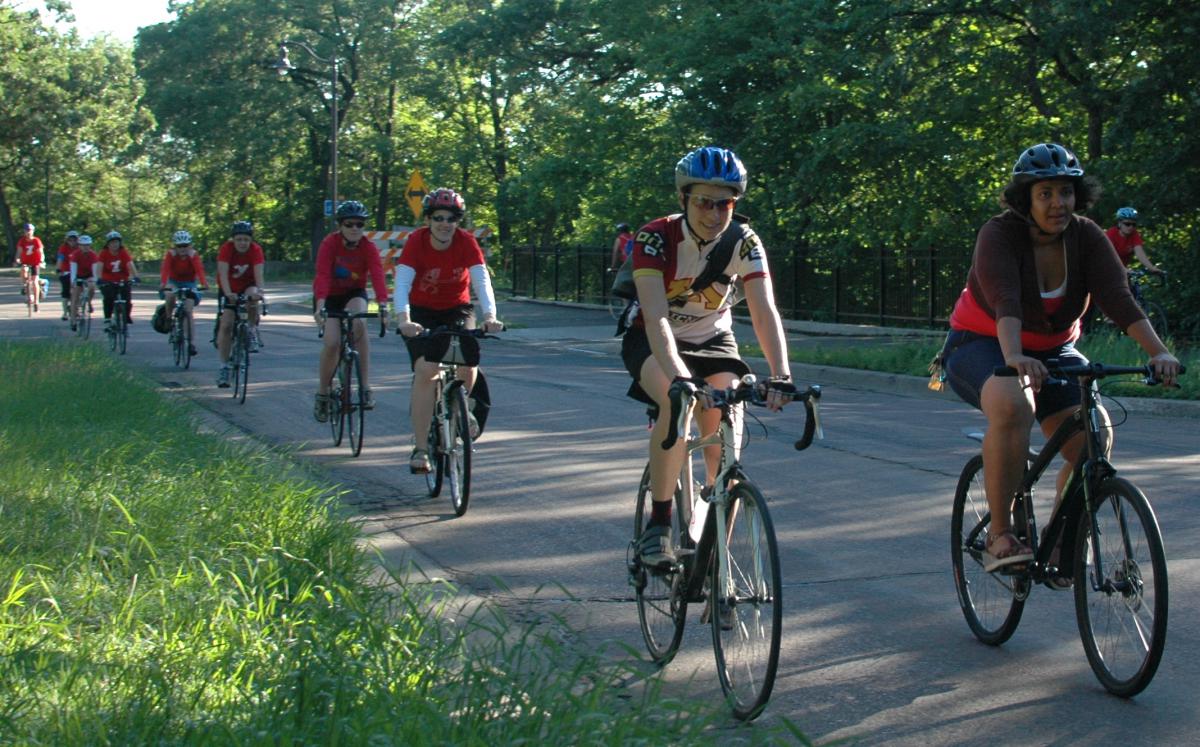 Their six-mile ride took them down the West River Parkway, over the Ford Parkway Bridge and along the East River Parkway. They checked out Jefferson Avenue, where there are plans to put in bike lanes, and returned to their starting point via Marshall Avenue and the Lake Street Bridge.

A handful of licensed cycling instructors, certified through the League of American Bicyclists, were interspersed throughout the group.

The ladies cruised along at a relaxed but respectable pace. Below, Rose Ryan (left) and Liliana Rivera enjoyed the ride and the morning’s hospitable weather. 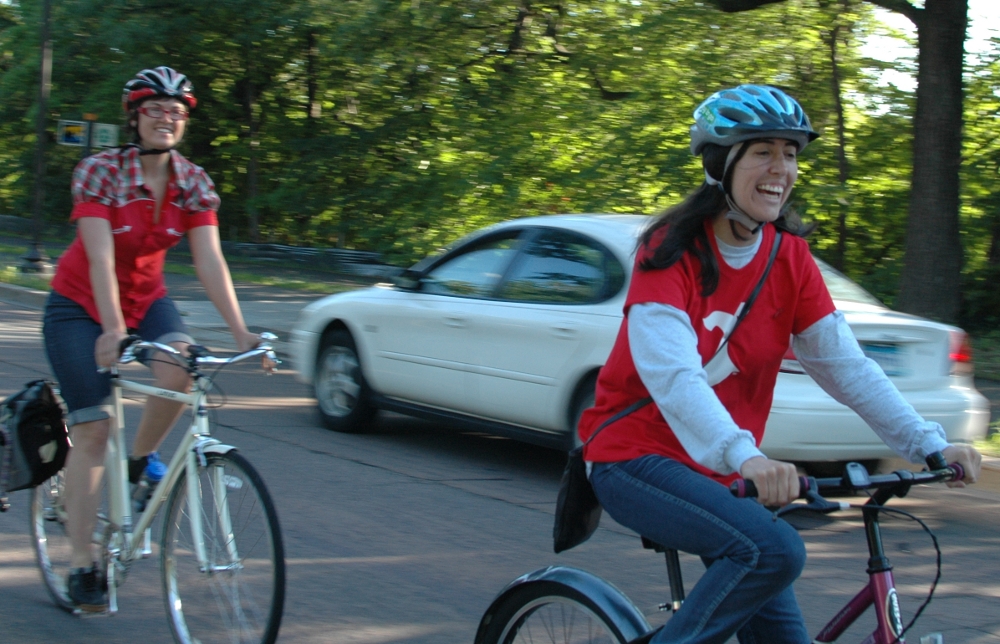 Rivera, an intern with the Twin Cities Bike Walk Ambassador Program, recently moved to the Twin Cities from Bogota, Colombia for graduate school. She said she is still learning how to ride her bicycle here, which feels much less crowded than her home city of nearly 10 million people.

Back at Dunn Brothers, the riders chatted over coffee and compared commuting notes. Rhonda Walker, below right, found a new friend in 61-year-old Jeanne L’heureux, a buff nurse who’s been an avid cyclist since childhood. 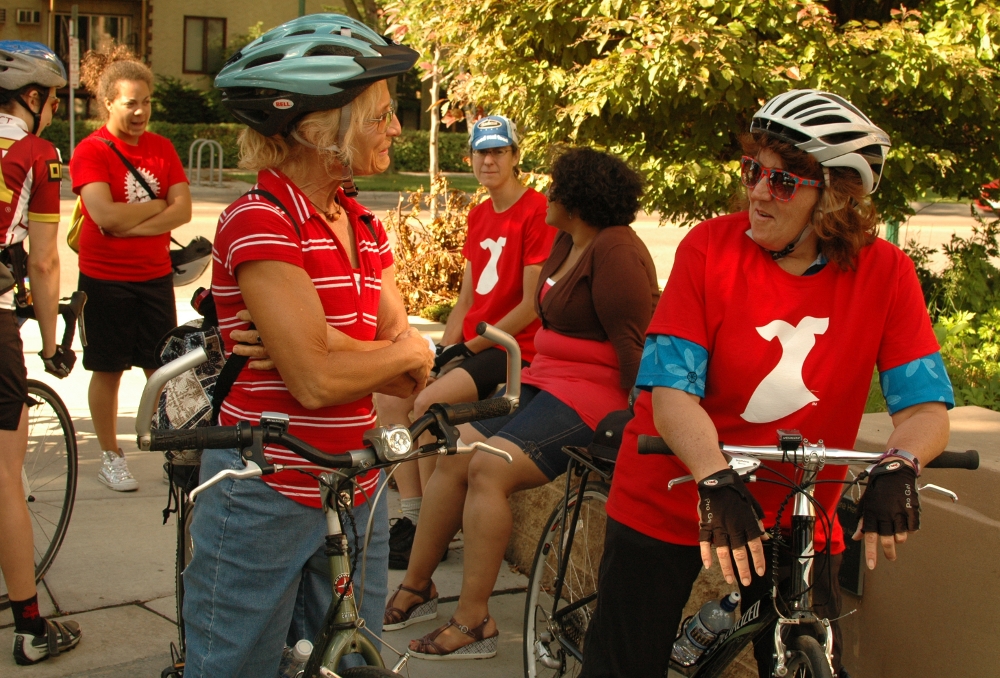 L’heureux said she read about the ride in the Star Tribune and immediately knew she wanted to go.

Below, the card stuck in Walker’s spokes signified her commitment to the Midtown Greenway Coalition. 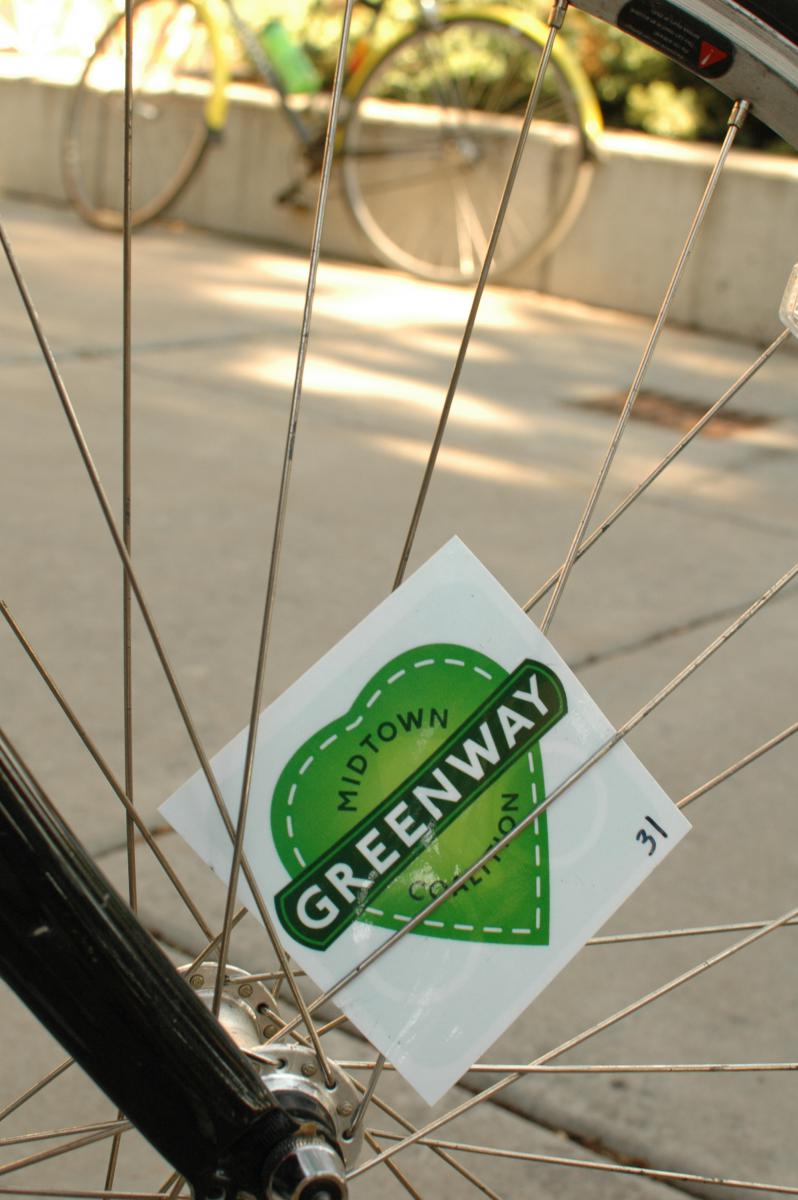 Around 6 p.m. the festivities turned to the Greenway, where volunteers hosted an extended, four-hour version of their weekly Women on Wednesdays (WOW) safety patrol.

Susan Priem, below left, started WOW this past April to promote safety and solidarity amongst female Greenway riders. 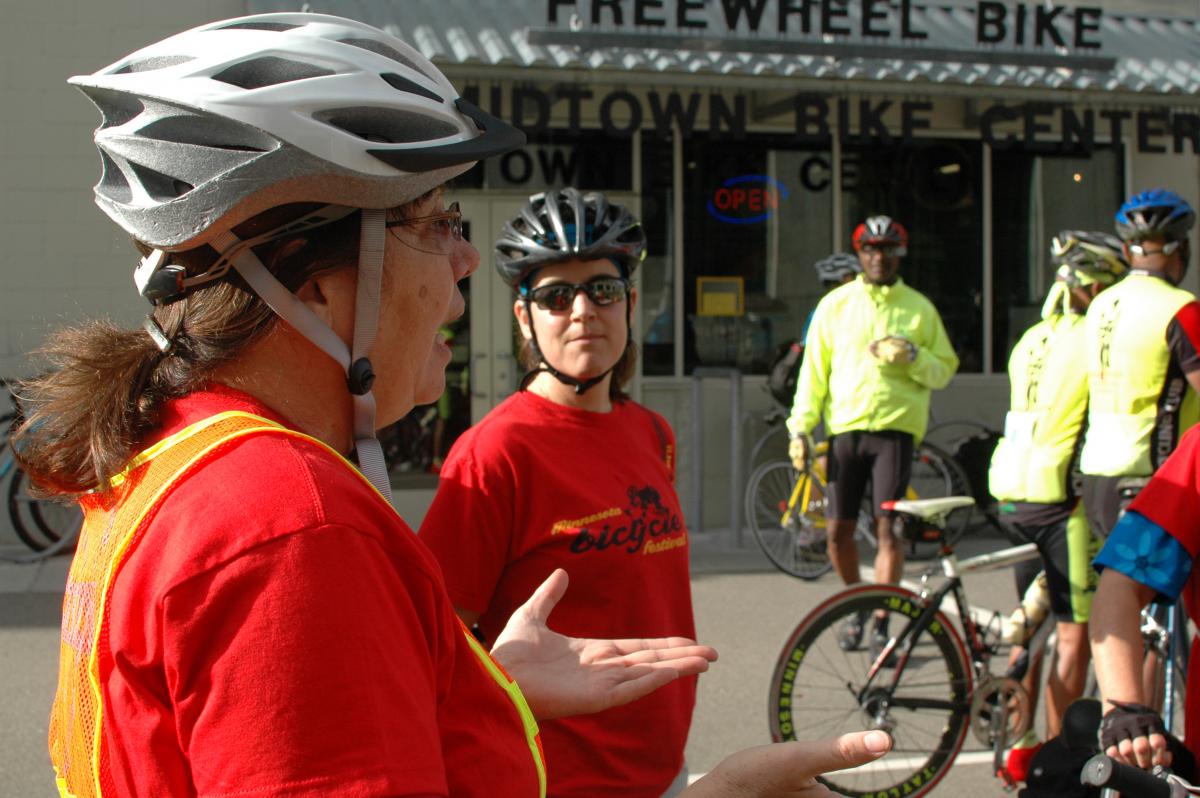 Discouraged by media reports of violence along the corridor, Priem said she wanted to show women that given proper precautions – such as always carrying a cell phone, turning around when something seems amiss and knowing the location of emergency lights and exits – the Greenway is a safe place to ride.

On regular weeks the group patrols for nearly two hours, looking for signs of trouble along sections of the Greenway and Light Rail Trail.

“The more eyes we have on the Greenway, the safer the Greenway is,” she said. Below, a pair of volunteers did their part on Wednesday to keep the corridor safe. 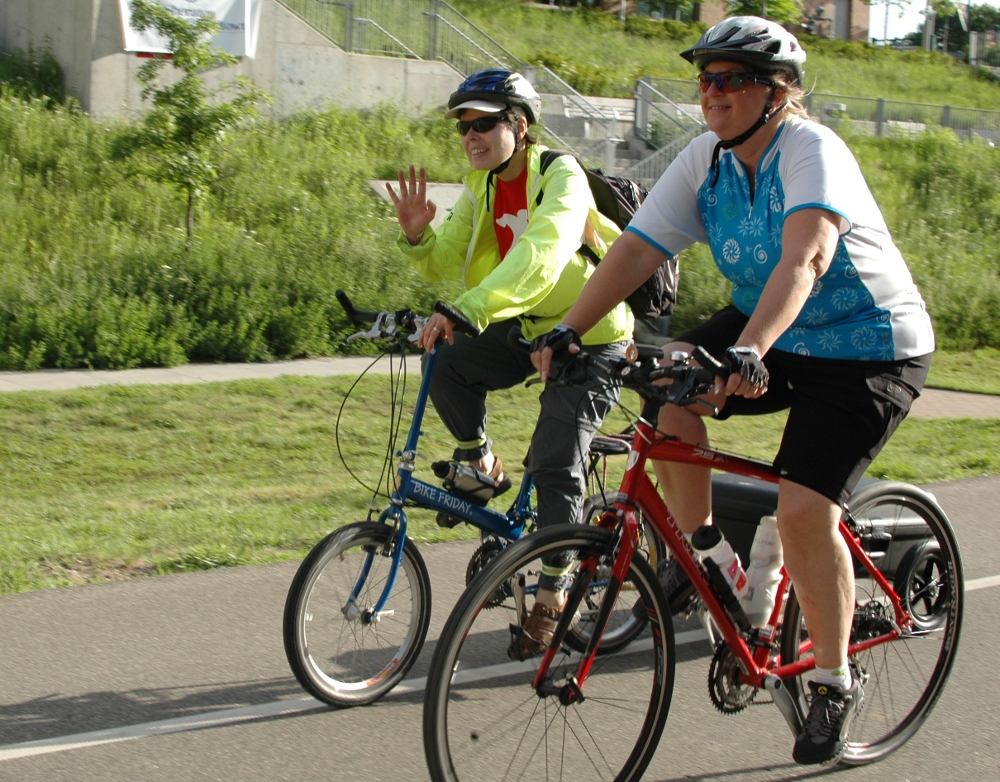 The event attracted riders from bike-advocacy organizations like the Grease Pit, a community bike shop in South Minneapolis, the nonprofit Sibley Bike Depot in St. Paul, and the collective Dames on Frames, which produces a feminist bike zine.

Bicycle commuter and racer Lee Penn, below, said she liked how the first-ever Women’s Wednesday brought together women from all these disparate but like-minded organizations. 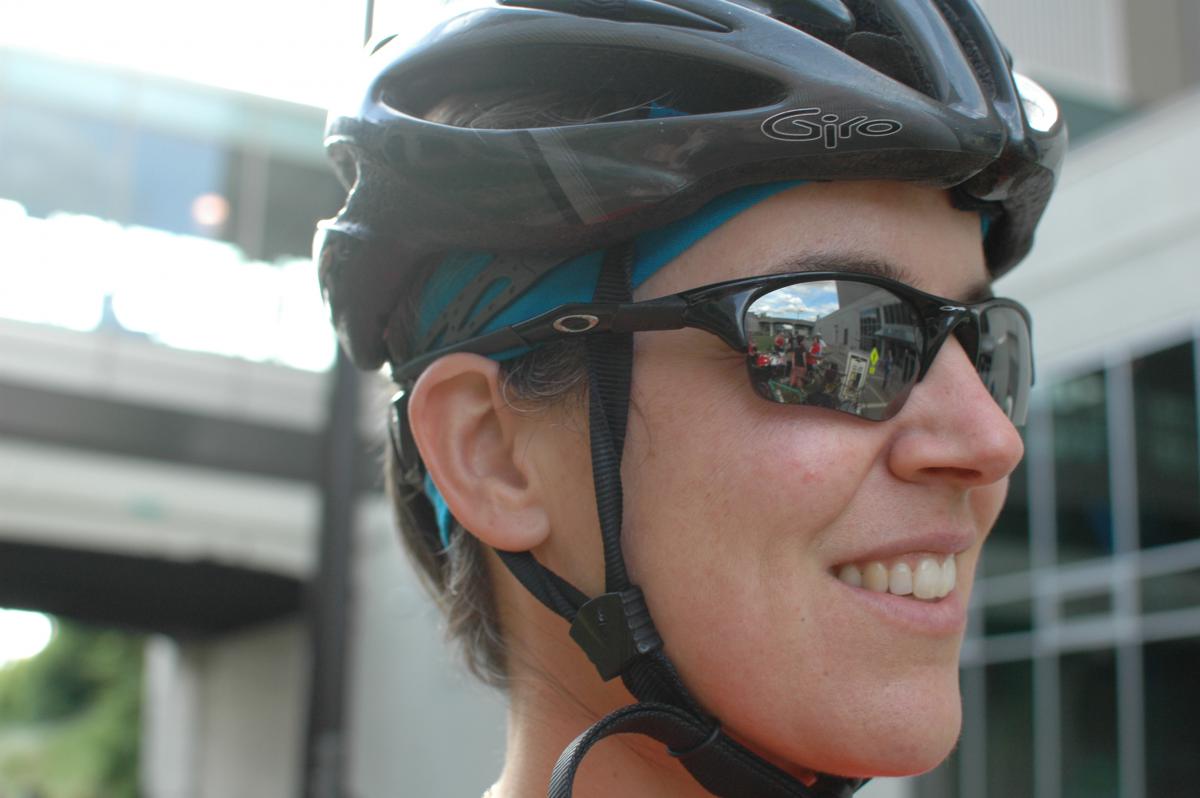 Asked what she liked most about bike commuting, Penn couldn’t boil it down to just one point. Instead, she picked her top four.

She paused, pondering the nature of her romance with all things two-wheeled.

“Even when you’re all stressed out, when you’re riding home, the troubles just kind of roll off your back with the wind,” she said. “I always feel better when I get home.” 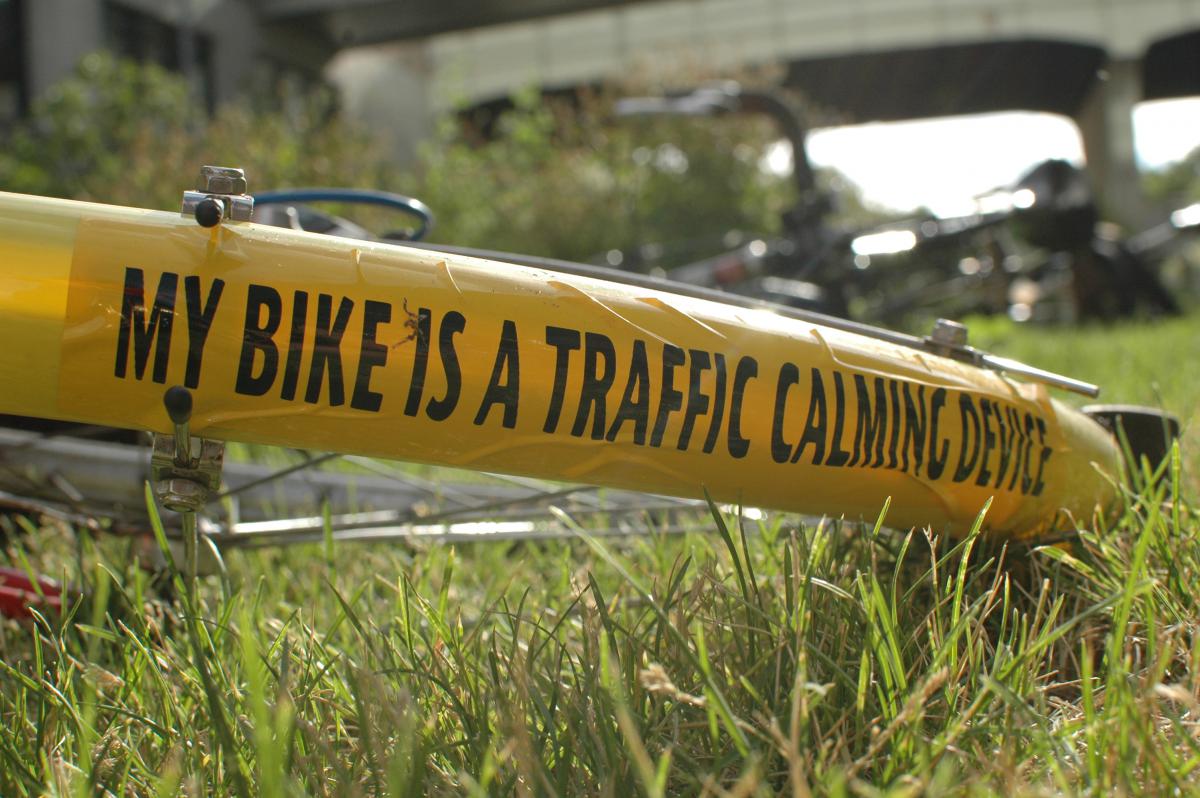 This sticker, stuck to the fender of community organizer Lauren Fulner, speaks to the relaxing effects of bicycle commuting.