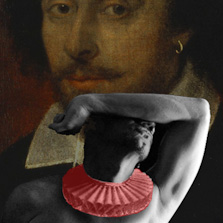 For those new to the blog: I’m currently touring a show in Kansas City, and what I typically do in the weeks leading up to Fringe is use the opportunity to review shows that are coming to Minnesota. This comes with the obvious caveat that they are often at a different stage of development, and the show that I see in KC may not necessarily be the show that you see in Minneapolis. That said – as long as I’m not able to be physically present for the pre-Fringe culture in MN – I might as well exploit the opportunity to offer some extended previews.

Alan Tilson is a performer who has often been performing in the same places as I have, though I’ll confess I’ve never caught one of his shows – his schtick is performances of Shakespeare monologues, essentially an acting showcase, and I tend to favor creative rather than interpretive endeavors at Fringe (he refers to himself as an “Illustrator”).

My observation is that show-biz people tend to be divided on the Bard, either loving or hating his work with little middle ground. I fall firmly in the “love” camp – I think he has an incredible ear for poetic language (by turns melodic and coarse) and psychologically complex character portraits. He’s a clear master in both arenas – there’s a reason why his name (and many of his invented words) have fallen into the popular lexicon, while most of his contemporaries are regarded as academic footnotes. My best guesses as to why he is disliked boil down to A) backlash against his popularity, and B) frustration with the evolving language – and, as someone who has devoted most of his career to adapting English texts that predate Shakespeare by several centuries, the latter’s not so much an irritant for me.

The focus of this show is monologues from the history plays, which strike me as being possibly the least accessible, with their focus on heightened and courtly language. I’d actually be really interested to see his take on the other genres (which he’s done, in other shows).

He opens with an introduction, in which he discusses his passion for the material, as well as offering his thoughts on some of the uniting themes. (I’m not entirely sure that I agree with his thesis of Shakespeare’s belief in love as a healing force – it’s an interpretation widely embraced by the Baby Boomers, but one I struggle to see in the texts themselves.)

So he clearly has a great love for the material, and many years of experience with it, as his programme indicates. But the conceit remains one that I struggle with – that is, removing chunks of text from the source play and presenting them out of context.

I found myself thinking that throughout – that there’s a number of the performances here that I might truly enjoy as part of a full production. But the problem with presenting a series of speeches is that they tend to be plucked from the most emotionally heightened sequences of the plays – so we find ourselves leaping from one shrill cry to another. The performance doesn’t pace in a satisfying way.

(I do also think he was ill-suited to the space I saw him performing in, in KC – his style is broad and theatrical, appropriate to wide, open venues, and this space was…intimate. It created the disconnected sensation that he was screaming at me. Even so for some of the smaller, conversational pieces – the prologues and sonnet – I found myself wanting to say, “Dude. Relax. I’m right in front of you.”)

I left with the sensation that he was incredibly engaged with the *physicality* of the language (which is great, because that’s one of the things that’s so much fun about the writing), but often at the expense of the *content*. He rounds his vowels and carefully articulates his consonants, but I feel as though I’m watching someone recite, rather than inhabit, the words.

I was particularly delighted to see prominent place given to Richard II, one of my favorite (and often overlooked) plays. Yet I was squirming in my seat for one of the best speeches: “For God’s sake, let us sit upon the ground/and tell sad stories of the death of kings…”

Again, in context? Incredibly powerful. It’s a king, coming to terms with the fact that he’s lost everything, including – most terribly – his own moral certainty. It’s a man at the absolute end of his rope. And Tilson – bellows. He moans, he gesticulates, he – forgive me – saws the air with his hands, thus. I embrace the idea of a wide variety of interpretations – but I simply can’t visualize any production in which Richard behaving this histrionically would make sense to me.

So I find myself with a production that I can never quite engage in – it’s neither fish nor fowl, really, neither fully effective as a set of self-contained poems, nor fully effective as pieces of narrative. It’s frustrating, since there’s clearly an admirable degree of passion and skill on display – but I just can’t wholeheartedly recommend it, when I can’t see what it’s in service of.