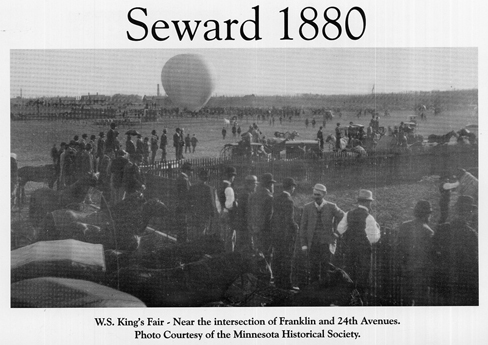 This Saturday the Seward neighborhood celebrates a much anticipated festival at Mathews Park known as “King’s Fair.”  This eclectic family-friendly event features home-grown musical talent and entertainment, tasty food by local restaurants, pet judging, artwork by our creative community, interesting history about our neighborhood, and plenty of fun activities organized by our local businesses and neighbors. 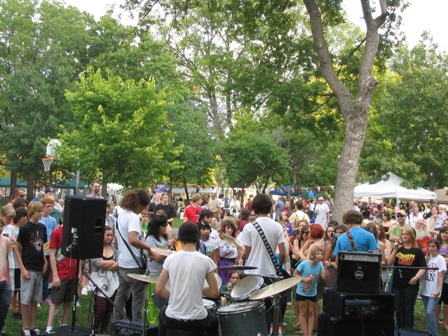 The King’s Fair of Today

Since there is no mention of royalty in the line-up of activities you may be wondering why it is called “King’s” Fair. The fair actually has nothing to do with kings or queens, but is named after a larger than life entrepreneur, Colonel William S. King, who had a talent for attracting a crowd to Seward. King was president of the first “Minneapolis Exposition” which operated from 1877 to 1882 on what was once a large fairground in Seward. “King’s” fair was such a huge success that it even began to compete with the Minnesota State Fair, although it was eventually outdone by its competitor and closed after 1882. When some Seward historians discovered this fascinating piece of history, in 1979 they resurrected King’s Fair as a biannual neighborhood festival. One hundred thirty years later nearly a thousand visitors will gather in Mathews Park for a day of community celebration.

As Seward resident Claudia Rhodes best describes it, “The Kings Fair is a bi-annual reunion event where we residents of Seward neighborhood come together to greet our neighbors maybe for the first time, or if we’re seasoned, reintroduce ourselves and share memories, surmise about the progress we’ve made, observe and discuss where we might be going individually and communally in the future.”  ﻿ ﻿

But it wouldn’t be a fair without a competition. Seward resident and Veterinarian Bev Mains has judged the fair’s Pet Show/Competition since she moved into the neighborhood in 1974.  Pet judging not only gives children in the neighborhood the opportunity to show off their furry, feathered, and scaled friends, but emphasizes the bond that exists between kids and their pets.  The child who demonstrates the highest level of knowledge about their pet and its care receives the Grand Prize Ribbon and all pets receive an award for something that makes them unique.  Mains speaks fondly of the judging, “We have children from toddlers to young adults participate every year.  I’ve had parents and their now grown up children come up to me years later and tell me how much fun it was to bring their pet!” 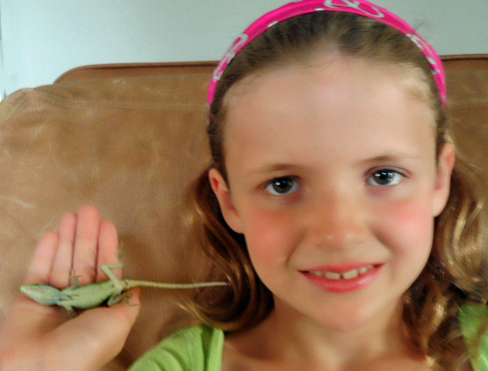 Ellie Barnett-Cashman with her Enoli, Alex.  Alex turns green when he is happy and is now playing “dead” in Ellie’s hands.

The story of Seward Community is still being uncovered and recorded today by the Seward History Committee. They are in the process of writing a book about the neighborhood and invite people to share their memories of the King’s fair and Seward at the History tent. Visitors will also have the opportunity to test their historical knowledge by taking the Seward quiz, view old photographs of days gone by, and learn interesting facts about the neighborhood, including the first King’s fair.

Here is the schedule of this Year’s King’s Fair Activities: 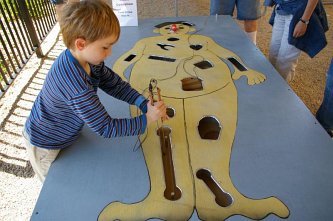 1. All types and sizes of pets are welcome

2.  Judging is based on the individual characteristics of the animals and the handler’s knowledge and ability to work with the pet.

3.  All pets should be restrained by leashes or some sort of container

4.  Handlers must remain with their pets at all times.

6.  Parents may be present but are NOT allowed to participate.